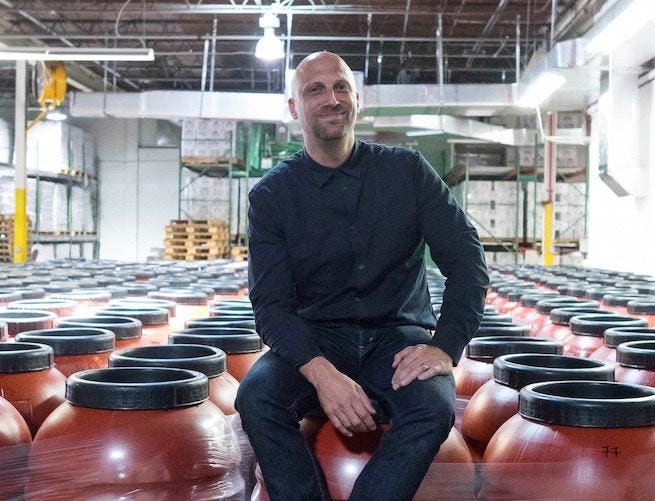 It takes the best quality ingredients to create the best possible cocktail experience, including the garnish. And an obsession with producing the best cocktail garnishes in the world led Daniel Singer to launch his Miami-based business, Filthy Food.

From its humble beginnings, with products being sold from the trunk of Singer’s car, one bar at a time, Filthy is now served by top bars, restaurants and hotels all over the world.

The British-born entrepreneur moved to the U.S. at the age of 18. By his own admission, things hadn’t gone well at school; he had also struggled with dyslexia and needed a fresh start. One of the first jobs he took was in a meat business.

He says: “It was in that environment, in the highly commoditized nature of the meat business, where I learned a lot about what sort of businesses I didn’t want to be involved in and the type of culture I would never want to have.”

In 2007 Singer finally found what he was looking for. He realized that some of the best bars and hotels were making cocktails, but using poor quality, very commoditized garnishes, specifically, olives.

“There was a huge desire among those working in hospitality, the bartenders, who love and take pride in their jobs, to give people their best experience,” he says. “It was in this little area of darkness, with all these substandard olive garnishes, I saw it incredibly brightly; a huge business opportunity, and I decided to explore it.”

In 2009 he teamed up with his brother Marc, a documentary maker, who’d just arrived back from Iraq, and together they launched Filthy Foods, a name originating from Singer’s childhood.

“When I was a little kid, I would play outside in the pouring rain and come home covered head to toe in mud, and my mother would say, ‘you’re filthy!’” he says. “I chose that as the business name because it reflects that joy of being completely immersed in the pleasure of what you are doing, getting filthy and loving it.”

Singer and his brother set off on a voyage of discovery to find the best olives in the world, a two-year expedition across Europe, sampling over 200 varieties of cultivatable olives.

“Growing up, Marc and I rebelled against each other, so this journey was an opportunity to reconnect, to see if we could build something,” says Singer. “It was as much about finding the best olives as it was about the two of us falling in love again as brothers, celebrating each other’s strengths, supporting each other’s weaknesses, and making the idea work.”

On returning to the U.S., they spent three years going bar to bar with backpacks full of jars. Eventually, the bartender-driven, word-of-mouth brand got its first distributor and had a presence in major hotel brands, airlines, and cruise operators within a few years.

However, Singer had to look beyond one or two strong products to break through as a brand. It had to be around what drinks people were consuming in the cocktail space at high volumes and how Filthy could be part of those stories.

“The U.S. cocktail consumption market is so diverse,” he says. “We were doing great with vodka martinis and Bloody Marys, but what about people who drank margaritas or whiskey cocktails, like Manhattan’s and Old Fashioneds? To make Filthy the standard garnishing for all those drinks, we had to be more than simply a product company. Filthy had to become a partner company for whatever drinks you were serving.”

Singer’s sights were also set on making Filthy a global business, but in 2020 when the pandemic struck and almost overnight shut the hospitality industry down, he saw an opportunity to rethink where the brand was going.

He says: “We launched a range of new products, including Bloody Mary and Margarita mixes in sustainable packaging, so people could still enjoy cocktails at home. While supply chain challenges were happening globally, we focused on the U.S. market and strengthening the partnerships we’d built in the business.”

As the pandemic subsided, Singer’s global aspirations were reignited, as the brand made headway in the travel industries, including cruise operators and airlines, channels that provided global reach and the opportunity to gain a foothold in key markets such as the U.K., Europe and Asia.

The business is turning over $20 million, which Singer expects to triple within three years, and has yet to seek any external investment. And for all of Filthy’s commercial success, he has never lost sight of the fact that quality products and ambitious plans are only part of the success story.

He says: “When you look at the most successful brands in the world, it’s rarely just about the physical product. It’s about passion. Yes, our products are beautiful, honest, and consistently high quality, but the love that’s gone into them makes the difference, and I want people to feel that love.”

Can AI be used to help people with disabilities? Experts say yes, with the ‘right data set’

Artificial intelligence (AI) is carving its way into modern society more and more every day. And, not everything about it is scary — for...
Read more