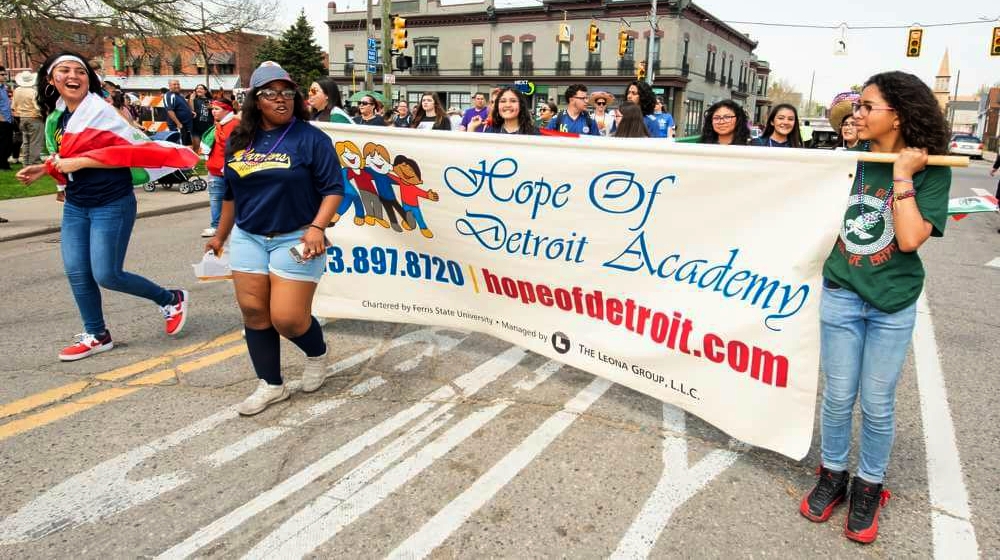 When one Michigan educator set out to help her students build an app, she immediately felt out of her league. Fortunately, Allie Langwald, the High School Instructional Coach at Hope of Detroit Academy, wasn’t deterred when she didn’t find an immediate solution. Soon Langwald discovered Zoho Creator, and the software – combined with Zoho’s exceptional customer support – helped Hope of Detroit students gain national recognition.

“I tried six different apps, and I had no idea what I was doing,” Langwald says. “I cried late at night, trying to figure out how I’m going to make this work for my kids.”

Langwald explains that she found Zoho by chance, and it immediately stood apart from the competition.

“I was able to talk to a live person, and set up an appointment, which was really helpful,” Langwald says. “They definitely got me a lot further than I ever thought I would get. Then our app ended up being super successful in winning the Samsung Solve for Tomorrow contest. It was crazy to go from having no clue what I was doing to winning a competition by building an app.”

Interested in learning more about Hope of Detroit Academy and how its students used Zoho Creator to advance their school and education? Keep reading for more of Langwald’s story.

What Does Hope of Detroit Academy Do?

Hope of Detroit Academy is a fully accredited multicultural charter school in Detroit, Mich., serving students from kindergarten through twelfth grade. It helps English language learners bridge the gap so they can obtain a highly qualified education. Hope of Detroit faculty strives to create global citizens who can participate and have a voice in the world. Founded in 1999, Hope of Detroit Academy has received more than $1.5 million in grants, and boasts more than 3,000 alumni with 10 consecutive years of AYP status.

What Is the Business Niche?

Hope of Detroit Academy is an elementary and secondary charter school serving more than 1,000 students in the Detroit area.

How Did the Organization Start?

While Hope of Detroit Academy saw its earliest beginnings in 1999, its education service provider, the Leona Group, was founded in 1996 when Dr. William Coats, a nationally recognized proponent of educational reform, sought to ensure every child, regardless of circumstance, has an opportunity to learn.

“He wanted to make schools for underprivileged kids because when his mother was growing up, she wasn’t allowed to continue her education after seventh grade because she was needed at home,” Langwald explains. “He was so sad for her because she was upset about being denied access to a good education, and he wanted to make sure that no kid would ever have to go through life unable to get a good education, no matter where they live.”

Initially serving kindergarten through eighth grade, Hope of Detroit Academy started educating students from a leased-out church building. Eventually, the organization was able to secure enough funding to expand into high school, located across the street from the elementary.

What Zoho Products Do You Use?

Langwald and her students used the free version of Zoho Creator to build their award-winning app.

“I Googled, ‘app creator for dummies,’ because I was so tired,” Langwald says. “I had tried so many times, and then I found Zoho on the list. I started using it, and I was able to do the things I needed to do.”

Winning Samsung’s Solve for Tomorrow contest in 2021 was a huge win for Langwald and her students, along with the entire Hope of Detroit Academy. The quest started in 2020 with a group of student athletes seeking a productive activity during pandemic closures. While school was in session, most sports activities were not. Langwald suggested the Samsung Solve for Tomorrow competition, which challenges students to solve real-world problems in their communities using science, technology, engineering, arts or math.

Langwald’s students had noticed all sorts of abandoned homes, old tires, trash and even drug paraphernalia on their daily walks to and from school. They told her how it was an unsafe route for them to travel, and they wanted to make a difference.

The students decided to build an app that would allow users to drop pins on a map of the city. So, anytime they saw an abandoned house, for example, they could drop a colored pin to mark the location, take a photo, and a report would be sent to the mayor. They assigned different colored pins to designate different types of hazards, and the pins would all appear on the app’s map.

“We dropped over 500 pins, and every time we dropped a pin, a report was sent to the mayor and the appropriate people,” Langwald says. “Then the housing commission started tearing down the abandoned houses, they started mowing all the vacant lots, and they started picking up all the illegally-dumped garbage using our app to locate where it was.”

Once a site is cleared, app users can swipe the pin, turning it green so the mayor is notified that the area was cleaned. Langwald says she has already noticed many old, abandoned houses that have been torn down, grass planted and safety restored.

“The kids are happy because they can walk to school with their siblings and not feel like something bad is going to happen,” Langwald says. “The neighborhood is so much cleaner, and it’s just a nicer place to be.”

Upon successfully building the app, Langwald and her students submitted a video entry to Samsung. A few months later, Hope of Detroit was selected as one of the competition’s national finalists – a feat which won the school $130,000 to use for technology. Upon hearing of the achievement, Ferris State University – which owns the school’s charter – matched the funds. With an extra $260,000 designated for technology, the school was able to purchase a technology makeover, offering students opportunities to learn how to code websites, learn to use app creator software and obtain other valuable skills. It even started an AI program and a drone flight club.

“The technology we used to create this app ended up giving so many more opportunities to our kids,” Langwald says. “They are so excited about everything that’s here. Now, knowing that we won, they want to learn more about technology and how they can use it to solve problems in their communities and what they can do to make everything better for their futures.”

Without a background in technology, Langwald’s biggest challenge was finding software that she could master. Before discovering Zoho Creator, she grew frustrated with several other products.

“I tried six different web creators that were supposed to be easy and painless to make an app, and they were miserable and horrible,” Langwald says. “Zoho Creator was the first one where I was able to do something, and then I started looking at ways to do more, and it was so much easier.”

How Did Zoho Help?

The fact that Zoho Creator was a user-friendly product greatly assisted Langwald in her pursuit to help her students build an app, but Zoho’s customer support made all the difference.

“Being able to talk to a real person when you had a question was helpful because none of the other apps offered that level of support – there was no human,” Langwald says. “The Zoho people were there willing to answer my questions. They were willing to simplify it for me. They made it very user-friendly when a lot of the other options just expected that you would know how to do these things.”

Langwald says she appreciated that Zoho was there every step of the way. Then the school’s physical education teacher, learning to build an app was extremely challenging for her, but she wanted to prevail for her students and grew frustrated when she couldn’t make it work.

“Then I finally found I was able to get it to work, and to see the smile on my kids’ faces… they were so excited that their idea was going to become an app. It’s actually going to work,” she says.

Hope of Detroit Academy continues to compete in Samsung’s Solve for Tomorrow, although they failed to win recognition last year. This year, Langwald’s students are focusing their project on functional literacy since almost half of their city’s population is functionally illiterate.

“We want to make an app again using Zoho, and we want to go after functional literacy, helping people bridge those gaps so they can become functional members of society and participate like everyone else,” Langwald says. “We’re really excited to roll that out.”

With the school year only recently underway, Hope of Detroit students are only starting to work on their entry. Langwald says she already called her Zoho support representative with the news and hopes to use the Zoho team as a valuable resource.

As for the students who designed the school’s award-winning app? They’ve expressed their excitement to teachers.

“They told me this is one experience that they’ll never forget for the rest of their lives,” Langwald says. “They learned how to make an app and be able to follow their dreams, and Zoho really helped them to do that.”

Realtors in the Hamilton-Burlington area say the market area saw some improvements in supply in November resulting in price drops year over year but...
Read more

Prime Minister Justin Trudeau is scheduled to make an announcement this afternoon in southwestern Ontario about electric vehicle manufacturing. Trudeau will be joined by Ontario...
Read more

Unlock The Entrepreneurial Potential Of Your Team With Employee-Ownership

A strong team of many outperforms even the most hardworking of entrepreneurs on their own. But when hiring employees, freelancers and contractors, how do...
Read more