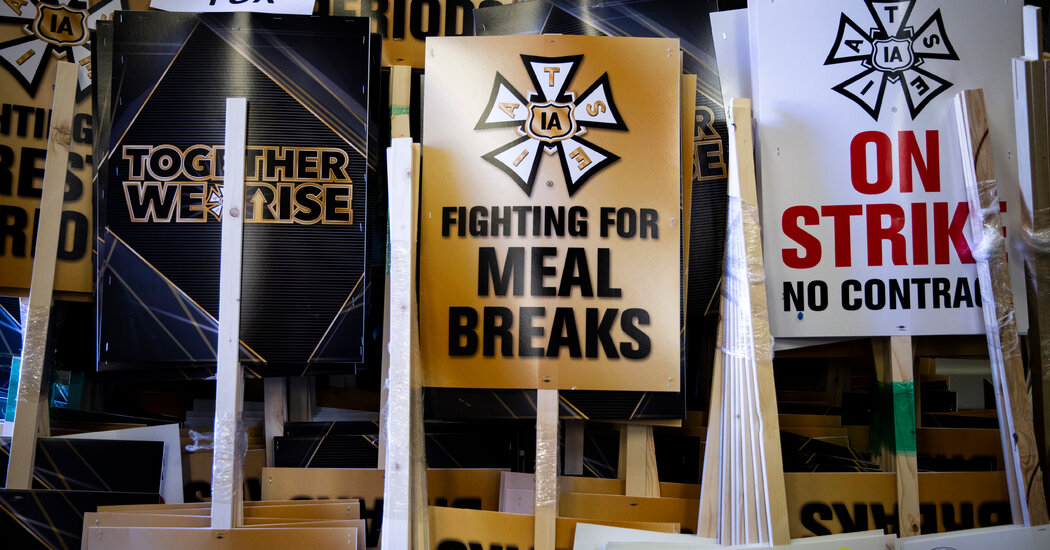 Camera operators, prop makers, lighting technicians and other members of the International Alliance of Theatrical Stage Employees ratified new contracts with Hollywood studios on Monday. But the margin was perilously narrow, with many members viewing the pact as toothless in terms of preventing long working hours — the kind of conditions recently endured on the set of “Rust,” the Alec Baldwin movie where the cinematographer was killed and the director wounded.

IATSE, as the union is known, uses an Electoral College-type system for contract ratification, in which local shops are assigned different numbers of delegates based on their size and all delegate votes are cast based on the majority vote at each local. IATSE said the combined delegate vote for the two contracts was 56 percent in favor, with 641 total votes from 36 locals.

The popular vote, however, revealed deep division: 50.3 percent of members voted yes on both contracts. About 72 percent of 63,209 eligible members cast ballots, according to the union.

Only 49.6 percent of members in Los Angeles voted yes. In other areas of the country — except the Northeast, which largely operates under a different set of unexpired contracts — the popular vote stood at 52 percent.

“The vigorous debate, high turnout and close election indicates we have an unprecedented movement-building opportunity to educate members on our collective bargaining process and drive more participation in our union,” Matthew Loeb, IATSE’s president, said in a statement.

In posts on Twitter, some outraged members demanded recounts and flung insults at Mr. Loeb and other IATSE officials.

Under the new, three-year contracts, the studios for the first time agreed to give crews a minimum of 54 hours of rest on weekends when working five-day weeks, on par with actors. The contract includes pay increases of up to 60 percent for some workers who were previously paid near minimum wage in California. Studios also agreed to fund a roughly $400 million deficit in the union’s pension and health plan without imposing premiums or increasing the cost of health coverage.

Last week, a smattering of IATSE members held a news conference in Hollywood to criticize the proposed contract — in particular a provision allowing crews to continue to work 14-hour days. The contracts provide for 10-hour “turnarounds,” or the time between leaving a set at the end of a work period and being required to return.

The shooting death last month of Halyna Hutchins, the cinematographer for “Rust,” and the wounding of Joel Souza, the film’s director, thrust concerns about crew rest into the spotlight. Hours before Mr. Baldwin fired a gun being used as a prop — he had been told the firearm was “cold,” meaning that it contained no live ammunition, according to an affidavit — a half dozen camera technicians walked off the set to protest working conditions. Their complaints included marathon work days, long commutes to the set (cutting into turnaround rest time) and delayed paychecks.

IATSE and the studios reached a tentative agreement for a new pact on Oct. 16, averting a threatened strike, which would have come at a particularly bad time for Hollywood. Studios have been scrambling to make up for lost production time during the coronavirus pandemic. Another shutdown would have left content cupboards dangerously bare — particularly at streaming services, which have become crucial to the standing of some of the companies on Wall Street.