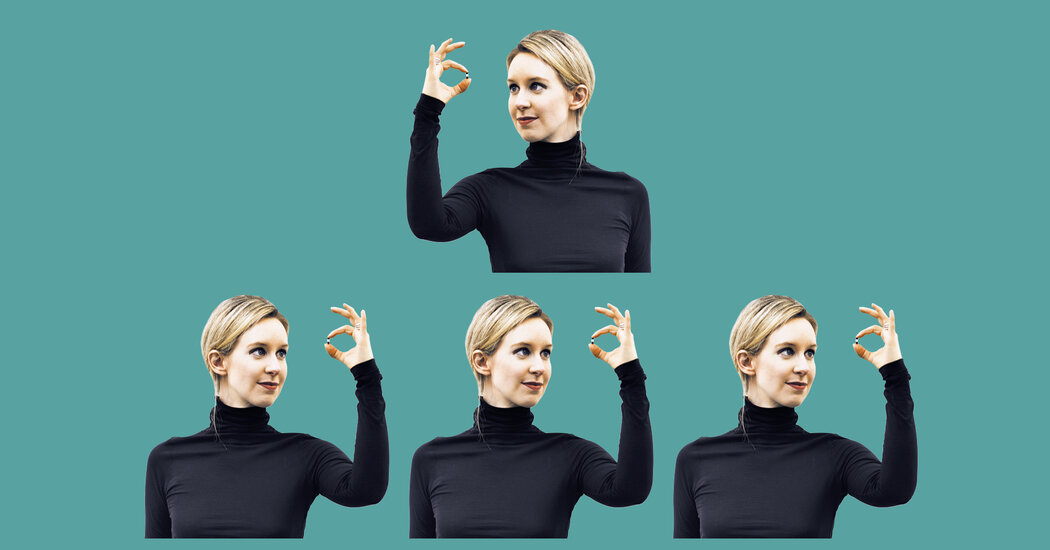 With limited series like “The Dropout,” “WeCrashed” and “Super Pumped,” the culture is saturated with ripped-from-the-headlines tales of self-immolating moguls.

“I’m not a bad guy,” the Facebook founder Mark Zuckerberg (Jesse Eisenberg) insists at the end of “The Social Network,” the 2010 film that defined the cultural response to young tech billionaires. Zuckerberg’s thoughtful lawyer (Rashida Jones), an invented character who serves largely to adjudicate Zuckerberg’s personality, assures him that she doesn’t think he’s a jerk: “You’re just trying so hard to be one.”

Twelve years later, this ambivalence toward tech titans has resolved. The new consensus is that there is indeed something wrong with these people. Consider the new Showtime limited series “Super Pumped,” which charts the rise and fall of the Uber founder Travis Kalanick (Joseph Gordon-Levitt). As Kalanick stomps across the tech scene, John Zimmer, the measured founder of rival Lyft, diagnoses Kalanick’s problem, and his superpower: “You’re not human enough.”

“Super Pumped” (based on the book by Mike Isaac, a reporter for The New York Times) arrives amid a wave of series about bad entrepreneurs — figures who exemplify the delusions of start-up hype as they lure investors to bankroll ideas that turn out to be stupid, evil or fraudulent. In Hulu’s “The Dropout,” Amanda Seyfried plays Elizabeth Holmes, the Theranos founder who dons a black turtleneck and pretends that she has developed technology that can diagnose ailments with a single drop of blood. In Apple TV+’s “WeCrashed,” Jared Leto plays Adam Neumann, the weirdly shoeless WeWork founder who hustles a $47 billion valuation for a bunch of co-working spaces that he says constitute a global consciousness-raising movement.

Even “Inventing Anna,” the Netflix series from Shonda Rhimes focusing on the SoHo grifter Anna Delvey (Julia Garner), feels sympatico. Delvey, whose real name is Anna Sorokin, floats through the millennial start-up scene with her unplaceable European accent, bumping into the pharma bro Martin Shkreli and Billy McFarland, the Fyre Festival fraudster, as she tries (but mostly fails) to convince investors that she is a German heiress launching an exclusive club she has named after herself.

These series range from the tedious (“Inventing Anna” makes Delvey’s high-wire deceptions as dull as the bus ride to Rikers Island) to the sublimely bizarre (when Seyfried confronts a mirror in smeared lipstick, she brings Joker-origin-story energy to Silicon Valley’s most notorious girlboss). Watching them together, they create a shared universe in which scamming and entrepreneurship meet in a chaotic portrait of American decline. Sprinkled through the shows are movie stars playing wealthy weirdos, maximalist title cards demystifying financial transactions, private-jet tantrums, questionable hair makeovers, vomit-marred staff parties and many self-aggrandizing comparisons to Steve Jobs.

Anna Sorokin, whose story is now revisited in Netflix’s “Inventing Anna,” was found guilty of theft of services and grand larceny in 2019.

The companies’ story lines are always spilling into each other. In “The Dropout,” Theranos partners discuss a new app that “lets you pay for a cab on your phone”; in “WeCrashed,” Neumann watches on television as Kalanick is ousted from Uber’s board; in “Inventing Anna,” Delvey’s lawyer operates out of a WeWork.

The central figures often appear like mirrored images: While Kalanick amasses cynical employees who want to break stuff, Neumann invites his deluded staff to “build tomorrow.” And as Holmes artificially lowers her voice to project a masculine presence, Delvey uses a voice-modulating app to impersonate the German manager of her nonexistent trust fund. Their arcs all resemble electrified versions of Hieronymus Bosch’s “The Garden of Earthly Delights,” where utopian dreams give way to wild sprees before devolving into ruin.

Most of these subjects are already intensely familiar. Though tales of corporate excess have long captivated the media and entertainment industries, never have the headlines been ripped as rapaciously (and as quickly) as they are now. Since Holmes’s claims were exposed as fantasy in The Wall Street Journal in 2015, for example, her downfall has been restaged in a book-length exposé, multiple podcasts, a feature-length HBO documentary, an online market of ironic fan gear, “The Dropout” and, perhaps someday, a movie starring Jennifer Lawrence, which remains in development.

“The Social Network” covered Facebook’s origins in just two hours, but this new entrepreneur class is being reprocessed through hourlong episodes that drop week after week. Even as these shows cast skepticism on speculative tech bubbles, they work to inflate a bubble of their own, as multiplying streaming services shovel cash into prestige limited series to bait viewers and knock out competitors. They feel calibrated to game the market in the same way: secure tested intellectual property on a recent scandal, recruit very famous people to impersonate the players, pace the story to a limited-series schedule (long enough to promote binge-watching, brief enough to lock in busy celebrities and justify budgets), then hope subscribers don’t cancel after the finale.

While HBO’s “Succession” has smartly imbued its bad-business story with the regenerative powers of a sitcom, toppling and resetting its chess board every season, the limited series is beholden to its inflexible arc. It tends to proceed like a morality play, with a firm resolution signaling a lesson learned. These shows process the same era in the same form through the same zeitgeist, and they come to similar conclusions. One is that the line between scammers like Delvey and titans like Kalanick is slim, and whole systems of power are implicated in their rise. As one “Inventing Anna” character puts it, speaking with the cool clarity of a Shondaland oracle: “Everyone here is running a game. Everyone here needs to score. Everyone here is hustling.”

But while “The Social Network” implies that Zuckerberg was brought low by the dizzying stakes of the start-up scene, these shows suggest that some people are drawn to that scene because they are ruthless egomaniacs. The system rewards them — “be crazier,” Masayoshi Son, the chief executive of SoftBank, advises Neumann — as long as the company valuation rises. The trouble comes only when the executive’s erratic behavior attracts negative press attention and threatens to spook the market and shake stakeholders’ fortunes.

Often the bad behavior concerns the mistreatment of women. As Tim Cook (Hank Azaria) of Apple warns Kalanick (the guy who thought it was a good idea to say “Boober” to a reporter), women are “the canary in the coal mine” of corporate dysfunction. While “The Social Network” argues that Zuckerberg started Facebook in a pique of casual (and largely exaggerated) misogyny, rampant sexism is now pitched as the tech industry’s defining quality — a weakness that threatens to topple bad men and, sometimes, lift bad women. In “The Social Network,” women are relegated to the role of crazy girlfriend or comely intern, and while this may reflect the chauvinism of Harvard and Silicon Valley, it also reinforces it. A refreshing development of these new tales is that women, too, are allowed to flourish into world-historical narcissists, often under the guise of countering that chauvinism.

Holmes rises by courting the admiration of, per one episode title, “Old White Men,” but also by positioning herself as a feminist triumph who speaks earnestly about women lifting women and, laughably, fighting the scourge of “impostor syndrome.” “WeCrashed” gives equal time to Neumann’s woo-woo wife, Rebekah Paltrow Neumann (Anne Hathaway), who announces at a company retreat that women must help men “manifest their calling in life,” then manifests her own calling through her husband’s company, firing employees with “bad energy” and starting a WeWork school for indoctrinating children into conscious entrepreneurship. And the “Super Pumped” version of Arianna Huffington is played by Uma Thurman as a suspect operator who flatters Kalanick — “Travis and I share a connection that one rarely finds in this world men have built,” she purrs — and rises higher in the company as other women sink.

Uma Thurman as Arianna Huffington in the Travis Kalanick story — that sounds like Hollywood word salad, but it’s engrossing nevertheless. Part of the draw of these shows is the curiosity gap they create when they assign a movie star to a name in the news. Though we may be overly familiar with, say, Elizabeth Holmes, we have not previously seen her story interpolated by an actor, and the Hollywoodification promises to reveal something that journalism cannot always supply: insight into what, exactly, is wrong with her. Seyfried plays Holmes as earnest, driven, vulnerable and hypercritical before she turns chilly, manipulative and despotic. I don’t know how true that portrait is, but I suspect that with an actor as perceptive as Seyfried, Holmes may come to seem more complex than she really is.

Recently the absurdity of venture capital has been dwarfed by the spectacle of cryptocurrency, and now crypto tales are being churned into content even faster than their predecessors. Within days of the arrests of Ilya Lichtenstein and Heather Morgan, dubbed the “Bonnie and Clyde of Bitcoin” and accused of a scheme to launder billions, the story had been optioned for a series. It’s being developed by Forbes Entertainment, the production arm of the financial magazine which until recently allowed Morgan to pontificate on its website as a ForbesWomen columnist, offering her “expert advice to protect a company from cybercriminals.” That’s the latest twist in the Hollywood I.P. gambit: Help build the myth, then dramatize the fall.