Here’s What Readers Told Us About Customer Service Nightmares 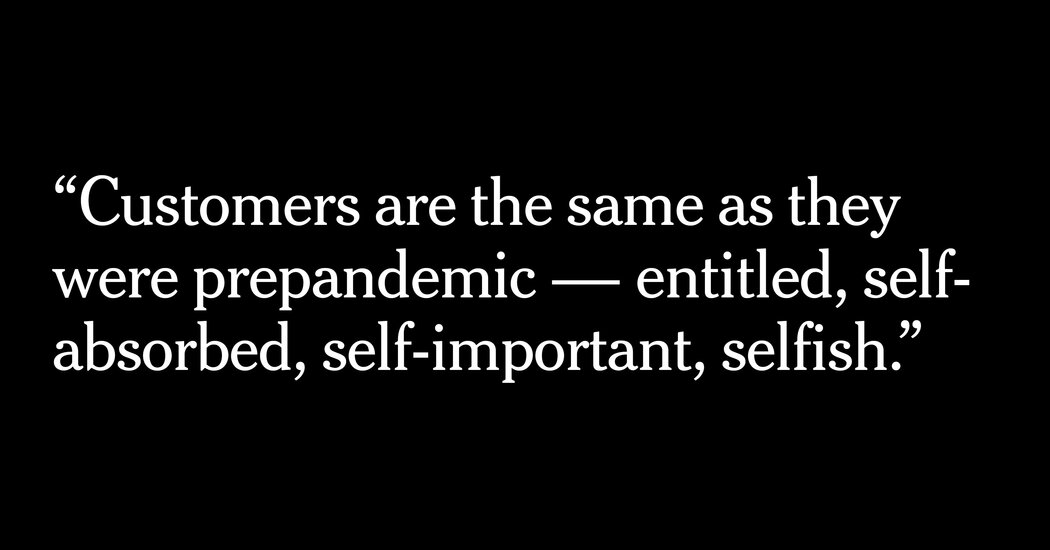 The pandemic hasn’t been easy for consumers or service workers. While consumers have faced increased prices, shortages and long delays to receive goods and services, workers have had to deal with angry clients and to fill-in for sick co-workers, all while risking their own health.

In mid-December, The New York Times asked readers to tell us about their experience as customers and employees in the service industry during the pandemic. Many readers said that, while the quality of service that they experienced might have declined, they had developed more empathy for the overworked people on the other side of the register or phone line.

People working in the service industry expressed frustration that they were often in the difficult position of enforcing masking rules with noncompliant customers, whether in a grocery store or the cabin of an airplane. For many, enduring verbal abuse has become just another aspect of the job.

And while some customers expressed admiration for U.S. Postal Service employees and retail workers, they were enraged by the technological hurdles some companies put up to reach a customer service representative. They said they found themselves in a bizarre, never-ending rigmarole with a machine. One reader said she struggled to have a deceased family member’s cellphone plan canceled, even after presenting a death certificate at a store.

Here are some of the responses we received from people on both sides of the customer and service worker exchange. Responses have been lightly edited for clarity, and some people preferred to give only their first name.

“I feel my own standards as a customer have changed. Knowing that most people in these jobs receive low pay and may be new to the job, I am kinder, more patient and have lowered my expectations as to prompt, competent service.”

“Overall, I think most customers are more tolerant, especially when they see bad behaviors from other customers. Don’t blame customer support for something that they cannot control.”

“I think service has gone down as businesses cannot find employees that delight customers. But, I do give bigger tips knowing that the person serving me is either stressed or working harder.”

“Customers are the same as they were prepandemic — entitled, self-absorbed, self-important, selfish. The difference the pandemic has brought is the excuse of using the pandemic to justify their own bad behavior. Mask-less interactions, indifference to the human being that is willing to assist them with their mundane requests. I have been on both sides of the counter with this and it certainly goes both ways.”

“Not sure I could do my job with the level of criticism that postal workers have endured over the past two years. The Postal Service is a great American service — I’m glad it’s here and happy to support it.”

“Sometimes — if you are really lucky — you get someone who is really willing to stick with you to solve your issue rather than just check the boxes of their job requirement. Apple retail employees are hands down the best. Barnes & Noble retail staff are also good.”

“I’ve been able to de-escalate most customers before they’ve reached the point of asking to speak to a manager — I think my company’s recovery options are very robust in making that possible — but you can often tell that people who come in hot are going to stay hot until they get what they want. Often, that unfortunately means resorting to personal insults.”

“Customers at supermarkets, the only places I’ve gone except outdoor, spread-out lunch places, are very different. Violent — as if they were at a school board meeting if told to mask or leave — in some cases. Everyone in line, spaced and not, is on edge. I always feel for checkers and let them know how appreciated their cool is.”

“Frankly, if we can get past the automated answering machine to an actual human, we think ourselves lucky.”