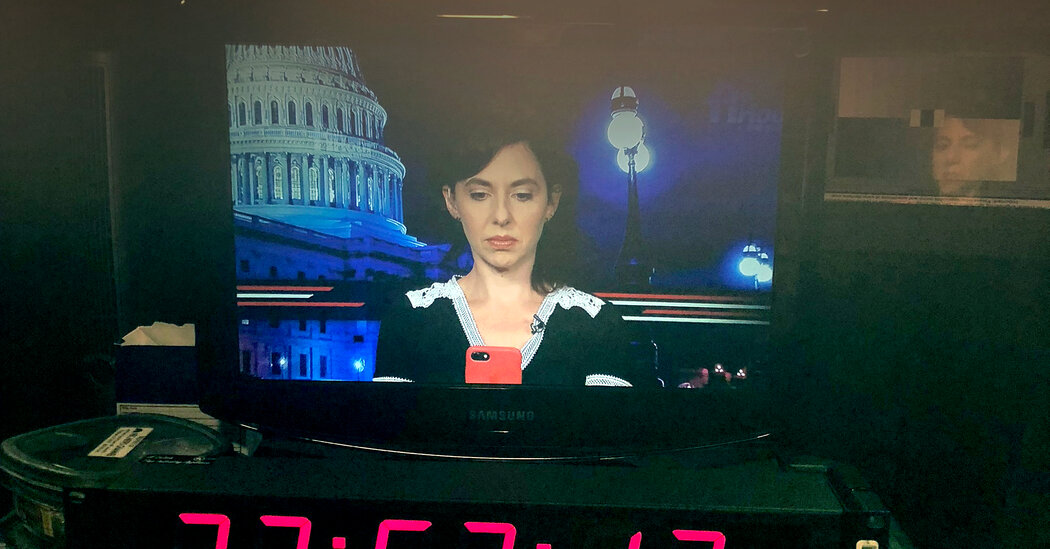 Appearing on TV news shows lets Times reporters take their work to a wider audience. But the opportunities must be handled with care.

Times Insider explains who we are and what we do, and delivers behind-the-scenes insights into how our journalism comes together.

“What do you think?”

The host looks to you. Hundreds of thousands — even millions — of television viewers await your answer. What do you say?

Annie Karni, a White House correspondent for The New York Times who is a regular guest on MSNBC, said she has been asked some version of that question often during her TV news show appearances over the past few years.

“You’re there to talk about your reporting, even if the host is pushing you to offer an opinion,” she said.

Ms. Karni is one of approximately 20 Times reporters who make regular appearances on television networks like CNN, CBS and MSNBC. Although most appearances are unpaid unless a journalist has signed a contract with a network, Ms. Karni and others see substantial pluses in the appearances.

“Sources in Washington watch, and maybe someone starts to recognize you more and is more likely to return your call on your next story,” she said.

“It’s also another way to bring the work of The Times to people watching a program who might otherwise not have seen it,” said Zolan Kanno-Youngs, a White House correspondent for The Times and a CNN contributor.

Reporters are generally asked to appear on a show a few hours in advance, Ms. Karni said. They are given topics of discussion, along with any relevant articles to read, though producers do not supply precise questions.

Before an appearance, Ms. Karni said she sometimes makes extra calls to her sources to get additional context.

Katie Benner, who covers the Justice Department for The Times and recently signed on as a contributor at MSNBC, said she makes an extra effort to consider how to contextualize any topic she discusses for an audience that may be unfamiliar with it.

“If there’s a major shooting and the Justice Department has deemed it a possible hate crime, the public should probably know what constitutes a hate crime,” she said. “Are they on the rise? Are we seeing a trend? If someone else addresses that, great. If not, I want to make sure it’s said.”

Ms. Karni said the best way for reporters to learn how to present their work for a television audience is simply to do it repeatedly, but first-time guests aren’t completely on their own. The Times’s communications department offers media training for its reporters, which can include mock interviews. One thing that Ms. Karni said surprised her when she began appearing on TV was the streamlining and repetition necessary when summarizing reporting.

“You want to come up with one or two things you want the audience to know and really emphasize those,” she said. “Even if it’s not the exact answer to the question you’re asked, it’s better than trying to think on your feet.”

Even though a reporter may be on camera for only five minutes, the time required for TV appearances is hardly brief, Ms. Karni said. In addition to getting to and from the studio (during normal times, that is), reporters must catch up on all the news of the day, not just their specific stories. That can be the most difficult part, Ms. Karni said: the ability to pivot and to be prepared to speak on any pressing topic after a 15-minute cram session on the car ride over.

But journalists have been appearing remotely since March 2020, which enables them to commit more like 10 minutes of their time rather than two hours. And reporters can make late-night appearances on shows like “Nightline” without worrying about catching a late car ride home.

“It’s been a totally new world since the pandemic,” Ms. Karni said. “I bought a ring light for my bedroom, do my own makeup, and the whole thing is much quicker.”

Ms. Benner agreed but said she missed one big perk: the hair and makeup team.

“I normally don’t really wear any makeup, but they make you look amazing,” she said. “They’re also the funniest people and always make me laugh.”

Mr. Kanno-Youngs, however, has become a little self-conscious about dialing in from his apartment. His dog stares at him from the couch, just waiting to bark; people tramp by in the hallway outside his door; and he ends up eyeing artwork in his background, wondering if it’s slanted.

“That makes me nervous,” he said. “It’s like: ‘Geez, is this painting crooked in my background? Is Room Rater going to completely expose me because I didn’t wipe the kitchen counter?’”

Aesthetics aside, Ms. Benner pointed out one critical rule to her appearances. “If, because of your schedule, you have to choose between reporting and being on TV, you should always choose reporting,” she said.

But while Times journalists can spend months — or even years — reporting a single story, an appearance on a news show is, by comparison, over in a heartbeat.

“There’s always a moment right after the host finishes and they go to the next guest,” Ms. Karni said. “You’re like, ‘Oh, wait, I have one more thing I want to say — come back!’”