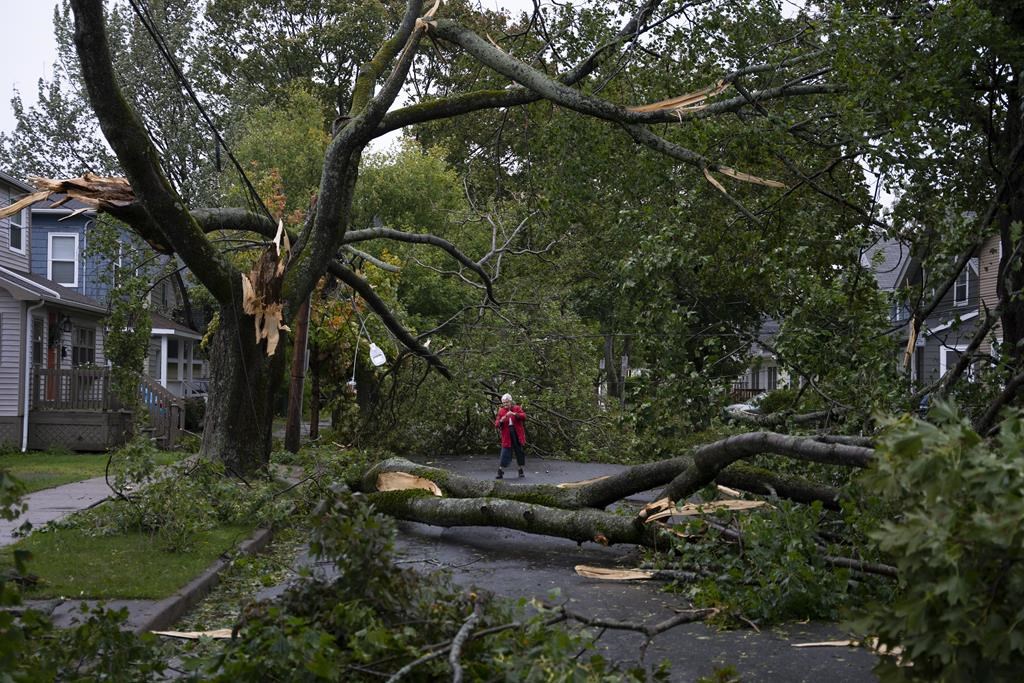 Carole Melanson, of Shediac, N.B., was sheltering with a friend on Friday night as Fiona’s wrath arrived.

“We lost power through the night so it was very dark. It was hard to see anything,” she said. “It was definitely interesting and scary at sometimes. The noise, the wind, the howling, the crashing of things, certain things coming off houses and flying around.”

The breakwater and cement slabs have been pulled away from the land. The water carried large boulders that used to provide a buffer.

In the village of Cap-Pelé, Sandy Beach Campground experienced the worst flooding it had ever seen.

The campground manager, Cindy Bourque, said they anticipated some flooding but didn’t expect the amount of water they received.

“There are some trailers that had received one or two feet of water within the trailers,” said Bourque.

“Some trailers actually — the water did grab them or it could have been the wind as well grabbed them and literally moved them spots from where they were originally standing. We have decks that also went from one end of the campground to the other end completely.”

The campground was ordered to evacuate on Friday, which it had never done before. But in true Maritime fashion, neighbours helped each other.

Corry-Lynn Edmond’s trailer was entirely encased in water and believed to be a total loss.

“Our trailer in the back is under water. We do have quite a bit of damage. Our deck was 100 feet away,” Edmond said.

This is Tony Edmund’s trailer. He and his wife say it’s a total loss. Even on Sunday, water remained just a few feet back.

Also, those picnic tables? They don’t belong there. People have them scattered across the park all pushed to the far corner of Sandy Beach. pic.twitter.com/SVrkahXqzl

For people who have spent years in Sandy Beach, it was a devastating sight.

“Really for Sandy Beach and everybody else it’s been a disaster,” said fellow resident Monique Young. “There are so many of them that have lost their campers that it is heartbreaking.”

Realtors in the Hamilton-Burlington area say the market area saw some improvements in supply in November resulting in price drops year over year but...
Read more