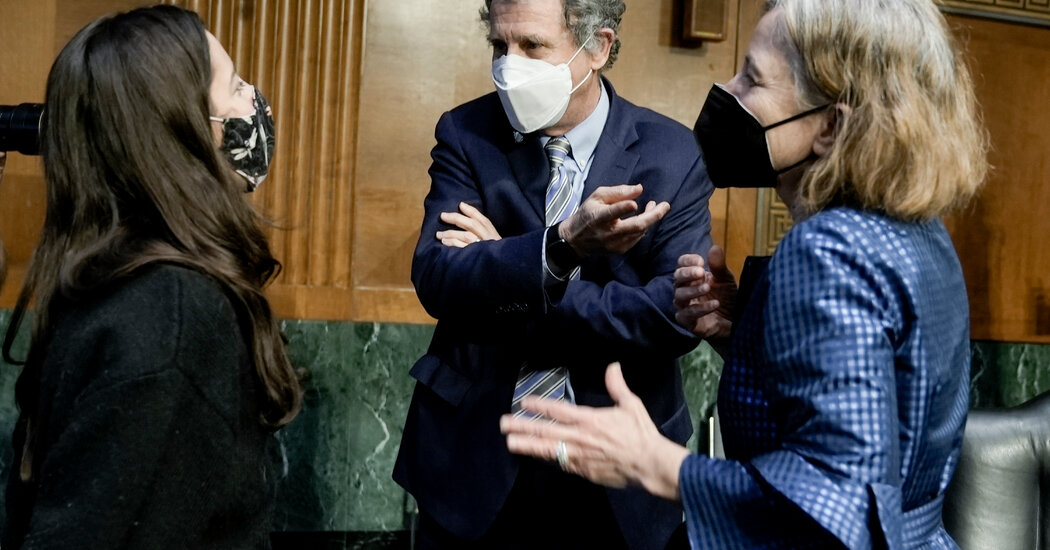 Three of President Biden’s nominees to the Federal Reserve committed to lawmakers that, if confirmed to their posts, they would not work in financial services for four years after leaving the Fed.

The pledge comes amid growing concern about the revolving door between Washington and Wall Street.

The three potential Fed governors in question — the economists Lisa D. Cook and Philip N. Jefferson and a longtime government official and lawyer, Sarah Bloom Raskin — said they would “commit not to seek employment or compensation” from any financial services company after leaving the board, which oversees the largest banks.

Their promises came at the urging of Senator Elizabeth Warren, the Massachusetts Democrat who has criticized the so-called revolving door between government and finance. Fed officials regularly go to work for Wall Street after leaving the institution, making the commitment notable.

“These are the strongest ethics standards ever agreed to by Federal Reserve Board nominees,” Ms. Warren said in a statement on Wednesday. “U.S. Senators and the American people can be confident that these public servants will make sound economic policy decisions in the public’s best interest.”

Republicans have been questioning Ms. Raskin’s nomination by highlighting her stint on the board of directors for a financial technology company, Reserve Trust.

During her confirmation hearing before the Senate Committee on Banking, Housing and Urban Affairs last week, senators questioned whether she had used her previous positions at the Fed and Treasury to help secure the account. Ms. Raskin did not confirm or deny whether she had been in touch with the company’s local Fed bank while she sat on its board.

The Federal Reserve Bank of Kansas City, which approved the master account, has said that it “did not deviate from its review process in evaluating this request.”

Ms. Raskin, in her response, said she did “not recall any communications I made to help Reserve Trust obtain a master account. Had I done so, I would have abided by all applicable ethics rules in such communications.”

Amanda Thompson, the communications director for Republicans on the Banking Committee, called those responses a “case of selective amnesia.”

The White House has continued to stand behind its nominees. Christopher Meagher, a spokesman for the White House, called the Republican questioning “smears” and said that they “continue to fall flat in the face of scrutiny and facts.”

Dr. Cook, Dr. Jefferson and Ms. Raskin are up for confirmation alongside Jerome H. Powell — who Mr. Biden renominated to be Fed chair — and Lael Brainard, a Fed governor who is the Biden administration’s pick for vice chair.

Senator Sherrod Brown, Democrat of Ohio and the chairman of the Banking Committee, said last week that all five candidates would face a key committee vote on Feb. 15.