Fashion Is Overselling Circularity And Recycling—But There Is Hope 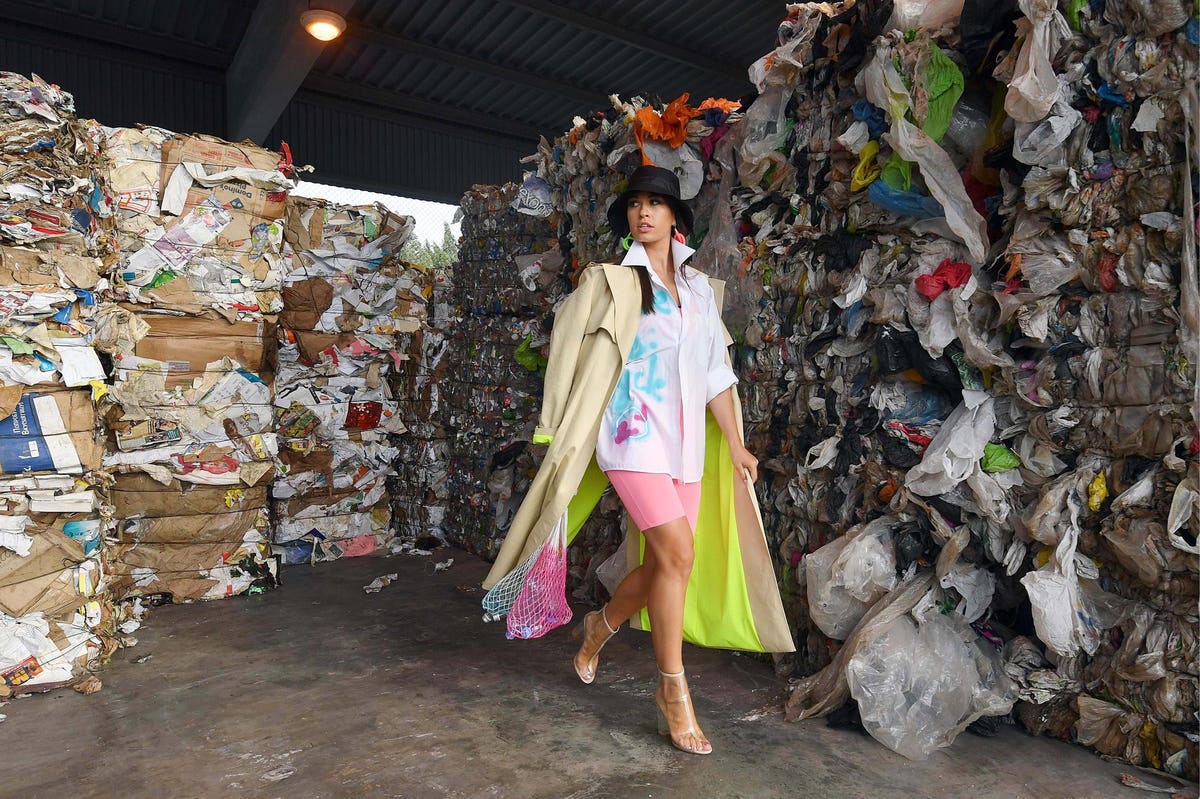 Since August’s IPCC climate report declared a ‘code red’ for humanity it’s becoming more difficult to write about sustainable fashion. Who wants to read about a recycled plastic sneaker when science is bellowing “decarbonise—NOW!”

But a covert sustainability barrier has morphed from a decade of (somewhat misguided) sustainable fashion initiatives that warrants examination.  The barrier grew, I contend, from a collective focus on the wrong levers for mitigating climate change.  Before addressing that though, how much greenhouse gas does fashion emit?

Fashion contributes approximately 8% to global emissions, but as population and consumption grow, this figure is expected to increase by 45% come 2030.  Simultaneously, an industry-wide science-based approach would require an 80% emissions cut by 2050 to remain below 2 degrees Celsius warming. Compounding fashion’s continual rise in emissions is ecological damage, biodiversity loss and wastewater pollution from textile production processes.  These interrelated global impacts are not clearly quantified.

To assess where the industry’s focus should be to best mitigate climate change, I have spent the past four months digging into stakeholder priorities, pouring through environmental science research and comparing sustainability pledges of global brands.  I have spoken to dozens of experts and read countless reports: I have been well, and truly, schooled.

Is the ‘solution’ the problem?

To elaborate, recycling and circularity are arguably the most potent and publicly successful environmental initiatives in the sustainability toolkit, but they offer far less environmental benefit than we think. This has created an illusion that the industry is becoming more sustainable, when the opposite is true.

Despite powerful consumer sway (and the personal satisfaction it gives us when we partake), recycling limps in at number 42 on a list of 82 possible actions to mitigate climate change, according to Project Drawdown.  Additionally, the above-referenced Quantis research concludes that implementation of circular (recycled) fibers would “achieve an approximate 10% industry-wide emission reduction within the broader apparel value chain” and a circular economy target alone would “simply not achieve the industry-wide emission target”.

Fiber recycling’s potential is limited by many factors, including fragmented infrastructure, downgrading of recycled materials, rapid growth of fashion consumption, and the vested interest of petrochemical giants (amongst others) in maintaining the status quo on virgin fiber production.  But does that mean recycling should be ignored in favour of adding our decarbonisation bellows to that of the scientific community?  Definitely not (although bellow too).

The key here is to openly and honestly admit the capacity recycling has to mitigate climate change, and how this potential changes when its limitations are addressed—including those stated in the previous paragraph.  Fashion’s overselling of recycling and circularity masks the vast work still to be done on recycling innovation and scaling. But there is good news. This article was inspired by significant expansion in textile recycling infrastructure and improvement in recycled material quality that could see an improvement in its impact mitigation ranking.  And as I learned in the following interview with Renewcell, it is a mistake to view recycling benefits in emission terms only—independent of ecology and resource extraction.

Renewcell is a fiber-to-fiber recycling company with a difference. Founded in Sweden in 2017, they join Spinnova and Infinited Fiber Company (IFC) in a surge towards rapid expansion of ‘chemical’ recycling of textile and garment waste.  Renewcell differs in that their only waste-input is textiles, while Spinnova and IFC also process wood and agro-waste. Renewcell turns cotton and viscose textiles into recycled pulp, which they supply to textile mills in place of wood pulp from the forestry industry. This pulp is then used to make new cotton-like material.  Like the fiber-to-fiber recyclers mentioned above, Renewcell’s idea is to extract maximum (and ongoing) value from cellulose-rich waste, without reducing the fiber quality, so that it can alleviate dependency on virgin sources.

The global cotton industry produces 25 million tonnes per year, at vast land, chemical and water cost.  Renewcell believes they can meet some of this demand.  Their biggest supplier is Bank & Vogue, who own and operate the vintage fashion retail chain Beyond Retro.  During an interview with Renewcell’s Chief Growth officer, Harald Cavalli-Björkman, he revealed they recently secured 30,000 tonnes of cotton-rich garment waste from Bank & Vogue’s sorting facility in India.  Additionally, they obtain pre-consumer textile offcuts from mills in Turkey, India and Bangladesh.  Following their IPO last year (which raised $60M from investors including Capital Group and H&M) they are transforming a disused wood pulp factory in Sweden into a production facility with 60,000 tonnes annual capacity. 50,000 tonnes is already accounted for, says Cavalli-Björkman: 40,000 tonnes will go to one of the world’s largest mills—Tangshan Sanyou in China, and 10,000 will go to H&M.

There is clearly demand, but what about capacity?  What volume of waste is available to feed the Renewcell pulp plant?  Is it enough to make a dent in global cotton demand? And what is the environmental impact of Renewcell’s recycled fibers (called Circulose) compared to wood-origin viscose, or virgin cotton?

First, examining the impact of Circulose production, Cavalli-Björkman says they used the Life Cycle Assessment Comparing Ten Sources of Man Made Cellulose Fibers (MMCF) by SCS, commissioned by Stella McCartney.  A third party assessment of Circulose was conducted using this methodology and demonstrated that Circulose had a net negative impact of -2kg Co2e per kg of fiber.  Cavalli-Björkman says this is attributed largely to Renewcell’s avoidance of tree logging for raw material (which has long term impacts on carbon sequestration, even if the trees are replanted).

Regarding capacity, Cavalli-Björkman says there is around 7 million tonnes of cotton-rich waste collected each year – compared to the 25 million tonnes of new cotton fiber demanded every year.  What is the scope for expansion of waste collection, I wonder, and what is the projected capacity for pulp production in years to come?  Cavalli-Björkman says that Renewcell has the resources to hit 120,000 tonnes of production per year, and aims to expand to 360,000 tonnes by 2030, funded by company revenue.  “[We have] $80M, plus 70M loans which gets us to cash flow positivity, enabling us to fund [our expansion] through the balance sheet” he explained.

The company is following the Offtake model that has seen great success in the technology sector. “Battery manufacturer Northvolt were founded on the strength of a $14BN contract with Volkswagen)” he says, along with SSAB ‘fossil-free steel’ (producing for Volvo) and “McDonalds signing a deal with Beyond Meat.” Reflecting on the success of this model across industries, the Chief Growth officer says “Companies are seeing their [sustainability] targets for 2030 and 2050 and realising there is going to be scarcity” of the most sustainable materials.  This is also true for fashion, with H&M, adidas and others committing to replace virgin materials with recycled ones within the decade.  Offtake models in fashion could secure the money needed to develop essential global recycling infrastructure, whilst guaranteeing material supply to brands helping startups get off the ground.

Capacity building is Renewcell’s biggest target, alongside global facility expansion, but Cavalli-Björkman cautioned against establishing coal-powered facilities abroad in favour of 100% renewable energy-powered facilities already operating in Sweden. Currently, they have no evidence that coal-powered processing of waste near sorting sites would be favourable to shipping the waste to Sweden.  During our discussion, the path is laid to grow Renewcell capacity to 500,000 tonnes per year, but global cotton demand is 700 times that figure – bringing back in to focus the current limitation of circularity in stemming environmental impacts.

Aside from this, however, it also raises the question of whether parallel cotton optimisation could turn the tide on the fiber’s global impact. Is there scope to reduce industry emissions within cotton farming practices?  Those questions are best tackled in another article (out soon), but they do highlight that the circularity conversation must not be held to the exclusion of the, albeit less buzzy, emissions reduction one.

Probing this subject further with Cavalli-Björkman, he admits: “We are very concerned with ourselves being used as any type of excuse for not pursuing all the changes [needed in] other aspects of the value chain—some would call that greenwashing.” Perhaps underlining the focus of the industry further, he added: “The company is not a substitute for extending the lifetime use of a garment or instituting circular business models”.  And it is certainly not a substitute for replacing coal with renewable energy sources in textile and garment manufacturing hubs.

This lands the circularity discussion in the right frame, in my view, as a fragment of a much bigger sustainability strategy that follows science-based targets for decarbonising the supply chain, optimising resource use, eliminating waste and toxic chemicals, and of course, recycling.