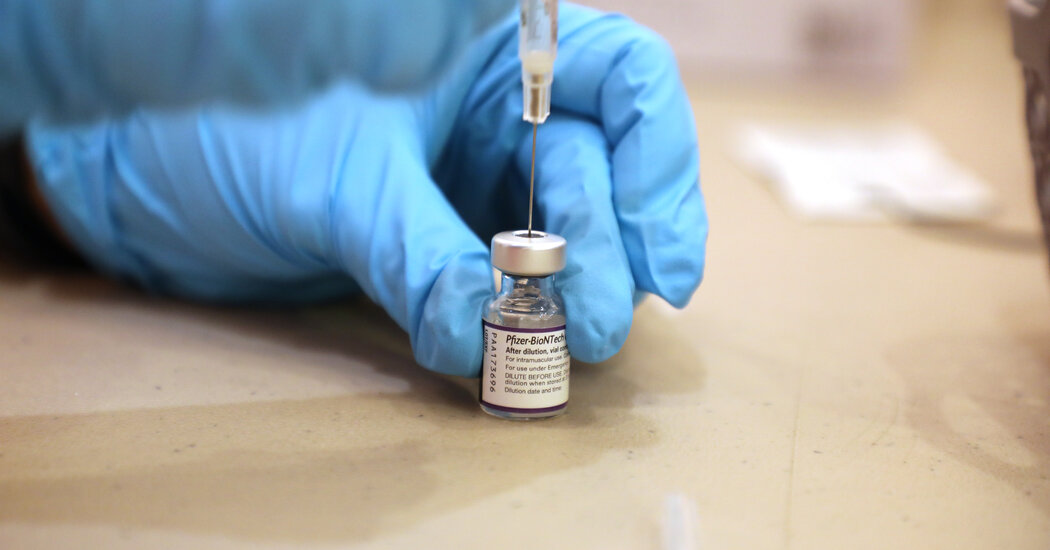 The timing of the meetings later this month suggests that the agency plans to move quickly to decide both issues.

The Food and Drug Administration on Friday scheduled three days of public meetings with its panel of independent vaccine experts for later this month, as the agency prepares to make high-profile decisions on whether to authorize emergency use of the Pfizer-BioNTech vaccine for children ages 5 to 11 and booster shots for adult recipients of the Moderna and Johnson & Johnson vaccines.

The F.D.A. typically issues its decisions within a few days of advisory committee meetings, during which members discuss safety and efficacy data. The timing of the upcoming meetings indicates that the agency intends to move quickly to decide whether to authorize both the booster and children’s shots.

The committee will meet on Oct. 14 and 15 to discuss booster doses, and is tentatively scheduled to discuss Pfizer’s pediatric vaccine on Oct. 26, the agency said.

“It’s critical that as many eligible individuals as possible get vaccinated as soon as possible,” Dr. Peter Marks, the agency’s top vaccine regulator, said in a statement.

He added that “the available data make clear that protection against symptomatic Covid-19 in certain populations begins to decrease over time, so it’s important to evaluate the information on the use of booster doses in various populations.”

The decision to have the committee discuss the evidence for Moderna and Johnson & Johnson booster shots two weeks before it does so for Pfizer’s children’s vaccine appears to reflect the F.D.A.’s priorities and the availability of data. But the agency’s decisions on those emergency use authorizations could come in quick succession.

Pfizer and BioNTech have yet to formally ask the F.D.A. to authorize emergency use of their vaccine for pediatric doses; they are expected to do so next week, according to people familiar with the companies’ plans. If regulators grant that request, it could help protect as many as 28 million children and ease the anxiety of parents across the nation. Dr. Scott Gottlieb, a Pfizer board member, has said the F.D.A. could decide as early as Halloween.

Children rarely become severely ill from the coronavirus, but the Delta variant drove nearly 30,000 of them into hospitals in August. Over the course of the pandemic, at least 125 children ages 5 to 11 have died from Covid, and nearly 1.7 million others in that age group have been infected with the virus.

They account for 5 percent of Covid cases and 9 percent of the nation’s population, according to the Centers for Disease Control and Prevention.

Pfizer’s vaccine has already been authorized for children 12 to 15 on an emergency basis, and is fully approved for those 16 and older. Moderna has also sought emergency authorization to offer its vaccine to adolescents, but regulators have yet to rule on that request.

Clearance of Pfizer-BioNTech’s pediatric dose depends not just on the strength of the clinical trial data, but on whether the companies can prove to the F.D.A. that they can properly manufacture a new pediatric formulation. Dr. Janet Woodcock, the F.D.A.’s acting commissioner, said again on Friday that regulators would thoroughly review safety and efficacy data before ruling.

“We know from our vast experience with other pediatric vaccines that children are not small adults,” she said in a statement.

It may turn out that the decision on whether to approve Pfizer’s vaccine for children is more straightforward, however, than the question of booster shots for Moderna and Johnson & Johnson recipients.

Last month, the F.D.A. authorized a booster shot for many recipients of the Pfizer-BioNTech vaccine six months after their second shot, and the Centers for Disease Control and Prevention recommended its use. But those actions followed fraught meetings of the advisory committees for both agencies. In the end, the government decided to offer a third shot only for those 65 and older and those who live in long-term care facilities. It is also offering booster injections to adults with underlying medical conditions and those who are at higher risk of exposure to the virus because of their jobs or institutional settings — a broad category that includes health care workers and prisoners.

Along with deciding whether to authorize boosters for Moderna and Johnson & Johnson recipients, the F.D.A. is also weighing whether people should be allowed to get a booster shot of a different vaccine than the one they originally received. Researchers with the National Institutes of Health have been conducting a so-called mix-and-match study in an effort to answer that question.

Separately on Friday, the Biden administration provided new details on a rule it announced last month requiring federal workers to get vaccinated against the coronavirus. The administration said in a memo that agencies could start enforcing that requirement on Nov. 9. “Employees who refuse to be vaccinated or provide proof of vaccination are subject to disciplinary measures, up to and including removal or termination from federal service,” the memo said.