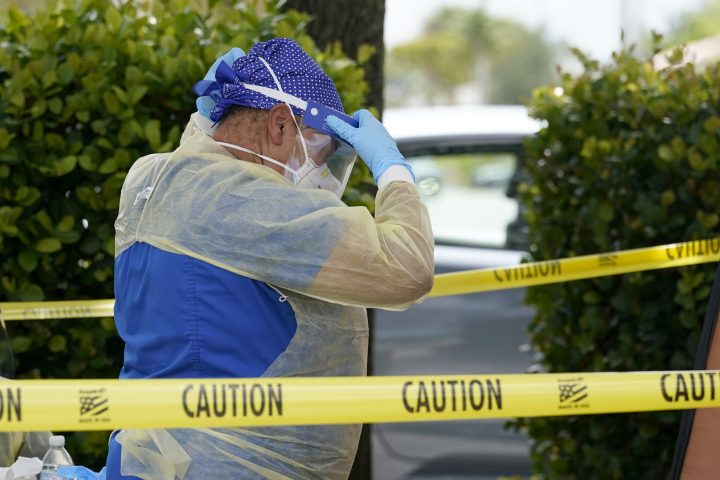 Seventy-seven-year-old Rousko Valtchev is recovering after he said he was violently attacked inside his apartment in the Central Village in Edmonton’s Queen Mary Park last week.

Valtchev said two men approached his ground-level apartment suite. One blocked his exterior door. The other came inside, robbed him and hit him repeatedly.

This break-in is not the only recent one at this residential building, which houses mostly seniors and people with disabilities.

Another man in his late 60s, who was too afraid to speak on camera, said he was also attacked.

“There were three home invasions, mine being the last one,” Central Village apartments tenant Eileen Radke said.

Radke also lives on the ground floor with her 79-year-old mother. She said last Monday, she came face to face with an intruder.

“I heard a noise, I came out, this man had sliced a hole in my screen and entered, and I walked into the room and saw him, and I didn’t know what to do other than scream,” Radke said.

Eventually, the man left and she called police. She put up a sign where the man entered that read: “You’re on camera,” and it scared the same man off when days later he returned but didn’t enter.

“Having someone come into your home and stand there with a nefarious purpose is terrifying. I just think if he tried to do something different, I might not even be here,” Radke said.

Radke said she has contacted the property management company several times about numerous safety measures she believes could have prevented these attacks but said nothing has been done.

Global News has also reached out to the company but did not receive a response.

“I just feel that it’s shameful that seniors in the prime of their life who have challenges with finances, housing and health have to go through being targeted by thieves because they think we are an easy target,” Radke said.