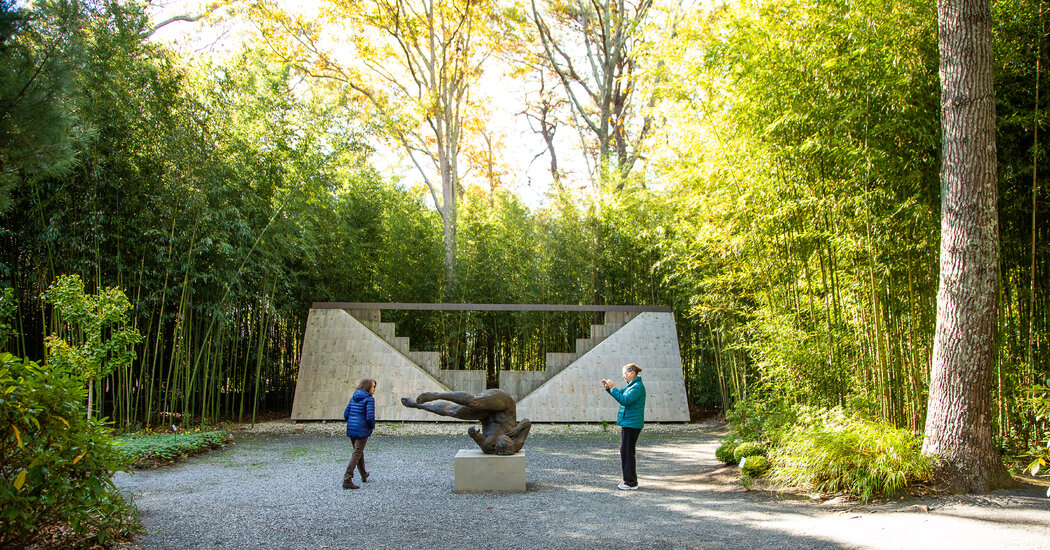 Some patrons of the LongHouse Reserve are upset that its veteran director was let go, but the board says it needed new leadership to expand the garden into a museum with a broader mission.

With its clipped hornbeams, lush borders and meandering paths, the LongHouse Reserve is a 16-acre sanctuary on Long Island’s fabled East End, a tranquil respite where visitors enjoy, not just quiet garden views, but sculpture by the likes of Willem de Kooning and Sol LeWitt.

Created by Jack Lenor Larsen, an internationally known textile designer, the reserve in East Hampton functioned for decades as both Larsen’s home as well as an attraction operated by a veteran executive director and supervised by a volunteer board.

But Larsen died last December at the age of 93, and this fall, the harmony of the retreat he created has been shattered by bitterness and recriminations.

Much of the upset stems from the sudden firing in September of Matko Tomicic, the director who had shepherded the reserve for 26 years. The LongHouse board gave little explanation for the change at the time, and more than 30 donors, many of them major supporters, have said they are withholding further gifts.

Several donors said they have removed LongHouse from their wills. One board member resigned in October but has not given a reason for her departure. An ex officio member of the board resigned in protest.

“I was astonished,” said Marcia Wilson, a donor and former trustee who has suspended her gifts. “Flabbergasted. Everyone had nothing but praise for Matko. I still don’t understand the logic.”

Some of the donors are also upset because they say Larsen changed a trust agreement seven weeks before he died to reduce his bequest to the organization. Last month, a donor filed a complaint with the New York State Attorney General’s Office, asserting that several board members had not fulfilled their fiduciary responsibilities to LongHouse because, the complaint said, they had actively supported changes to the agreement that reduced the bequest to LongHouse.

Supporters of the board say the decision to replace the director was motivated by an expansion of LongHouse’s mission. They say the institution will soon become not just a garden and sculpture reserve, but a full-time museum, one that incorporates Larsen’s home as a site for exhibitions. For that, the trustees decided they wanted a curator with broader experience.

An interim director, named in October, is Carrie Rebora Barratt, a former deputy director of the Metropolitan Museum of Art who later led the New York Botanical Garden as its president for two years, ending in 2020.

Karen A. Monroe, the lawyer who incorporated LongHouse in 1991 as a nonprofit, the year before it opened to the public, blamed Tomicic for encouraging the dissent. “Only some donors are unhappy,” she said.

“That is not by a stretch of the imagination, the majority of them,” she continued. “There’s always a couple of them, what do they call it, the ‘noisy minority’?”

Tomicic declined to comment. “I don’t want any trouble for me or my family,” he said.

The board’s defenders say it was Larsen’s prerogative to decide how he wanted to distribute his assets. They also say the institution is in a good financial position despite the potential cutback in gifts, and that donations are running ahead of last year because some existing donors have increased their support and new benefactors have stepped forward.

“Despite messages from a few upset donors, we remain confident, financially solid and grateful to our supporters,” the board said in a statement.

Though the way forward for LongHouse now seems more complicated, Larsen’s legacy as a textile designer is clear. His textiles grace interiors that included Frank Lloyd Wright’s Fallingwater and his work is in the permanent collections of the Museum of Modern Art and the Victoria and Albert Museum.

In 1975, he bought land in East Hampton to create a microcosm that reflected his designs, global travels and art collection. Today, it includes the house where he had lived and grounds filled with roughly 60 contemporary sculptures, a combination of pieces on loan and permanent works, including Buckminster Fuller’s “Fly’s Eye Dome” and Yoko Ono’s giant, monochromatic chess game, “Play It by Trust.”

Tomicic, 56, who studied at the University of Zagreb in Croatia, started at LongHouse in 1996 as executive director and was paid $194,075 in 2019, according to the institution’s most recent tax returns. He had previously worked as a personal assistant to Henry Geldzahler, the Met curator and former New York City cultural affairs commissioner.

During his years at LongHouse, he built personal relationships with board members and staff, which is why there is an emotional cast to the dispute now engulfing the sculpture garden. When Dianne Benson, one of the board members who voted to replace Tomicic, got married last year, it had been Tomicic who had walked her down the aisle.

“This is not an ‘et tu Brute’ moment,” Benson said in regards to her vote. “My personal feelings and what is best for LongHouse are two entirely different things.”

Some staff were also upset by the news that Tomicic had been let go, according to Joanne Kahn, who worked part-time in the gift shop and said she later resigned as a result.

An arborist, Ray Smith, said he had donated specimen trees and his company’s services to LongHouse for 18 years, work that he said would have cost the institution well over $900,000.

“After what’s happened,” Smith said. “Anything they need, they’ll have to pay for.”

Susie Gelman who, with her husband, Michael Gelman, said they have given $100,000 to LongHouse since 2012, said they were stunned.

“I really don’t see how my husband and I can continue supporting LongHouse,” Gelman wrote in an email. “It pains me deeply.”

Some of the donors who say they are withholding their gifts say they are concerned that Tomicic’s tense relationship with Peter Olsen, 68, a trustee and Larsen’s companion of 30 years, who lived with him, played a role in Tomicic’s departure.

The board has denied that. It has acknowledged that it was not initially forthcoming about what exactly had precipitated its decision to remove Tomicic, but has said that its reticence to reveal details earlier this fall in the face of criticism was an attempt to be professional and discreet. In an Oct. 19 letter to the institution’s members, the board’s co-presidents said that the “silence about the change in leadership was meant to be respectful to all the parties,” who “agreed to part ways.”

More recently, in an email to The New York Times, the board expanded on its explanation and said it understood the commotion as a signal of how deeply its members regard the institution. “We ask for patience and in return promise to be more forthcoming and open,” the board wrote.

The change in directors, it said, was based on LongHouse’s need to transition from “one man’s residence with limited public visitation to the grounds, to a more fully public institution.” One of the first priorities of its plan is to convert Larsen’s 13,000-square-foot home into a museum, the board said, and to do that it felt LongHouse needed “new leadership with commensurate skills and experience to help professionalize and sustain” it.

The board described Barratt, the interim director who had, in her time at the Met, helped oversee the renovation of the American Wing and Islamic galleries, as having “extensive experience in museum and public garden leadership.”

The complaint filed with the attorney general’s office argues that LongHouse will be significantly affected by the changes in the trust agreement that were made shortly before Larsen’s death. The complaint says that under a trust agreement Larsen made in April 2020, the bulk of his estate, including his Park Avenue apartment, was to go to LongHouse when he died.

But the agreement, according to the complaint, was amended in November 2020, just before Larsen’s death, to substantially reduce the gift to LongHouse by allotting additional money to a trust that will pay Olsen a stipend of $120,000 a year. Olsen was also given lifetime use of the apartment with its maintenance fees covered.

The board said it could not comment on the complaint because it has not seen a copy of it, but it released a statement to present its perspective on the changes to the trust agreement.
“The majority of Jack’s estate goes to LongHouse,” the statement said. “What is provided to Peter also reverts to LongHouse on his demise.”

The complaint says that several board members campaigned for the changes that would help Olsen, at the expense of LongHouse.

“How can you be on the board of LongHouse and not stand up for LongHouse and let monies that were initially directed to LongHouse go elsewhere?” said Wilson, one donor who has suspended her gifts.

The board, responding to such concerns, said in a statement: “In all of these matters, the Board acted ethically and in the best interests of LongHouse after careful deliberation and in fulfillment of its fiduciary duty.”

Olsen declined to comment beyond saying that he fully supports the board’s actions and plans, “which I believe to be consistent with Jack’s vision.”

The complaint to the attorney general’s office expresses concern that Larsen approved these changes during a period when his health and mental acuity were compromised, just after he had been released from the hospital after breaking a femur in a fall. It says one draft of the changes was shown to Larsen while he was still in the intensive care unit and that the final draft was signed six days after his discharge from that unit.

Other friends suggest such concerns are ill-founded. “Although his physical condition was deeply deteriorating,” said Roseline Koener, an artist in Westhampton who visited Larsen, her friend, several times after he left the hospital, “he always kept his mind.”