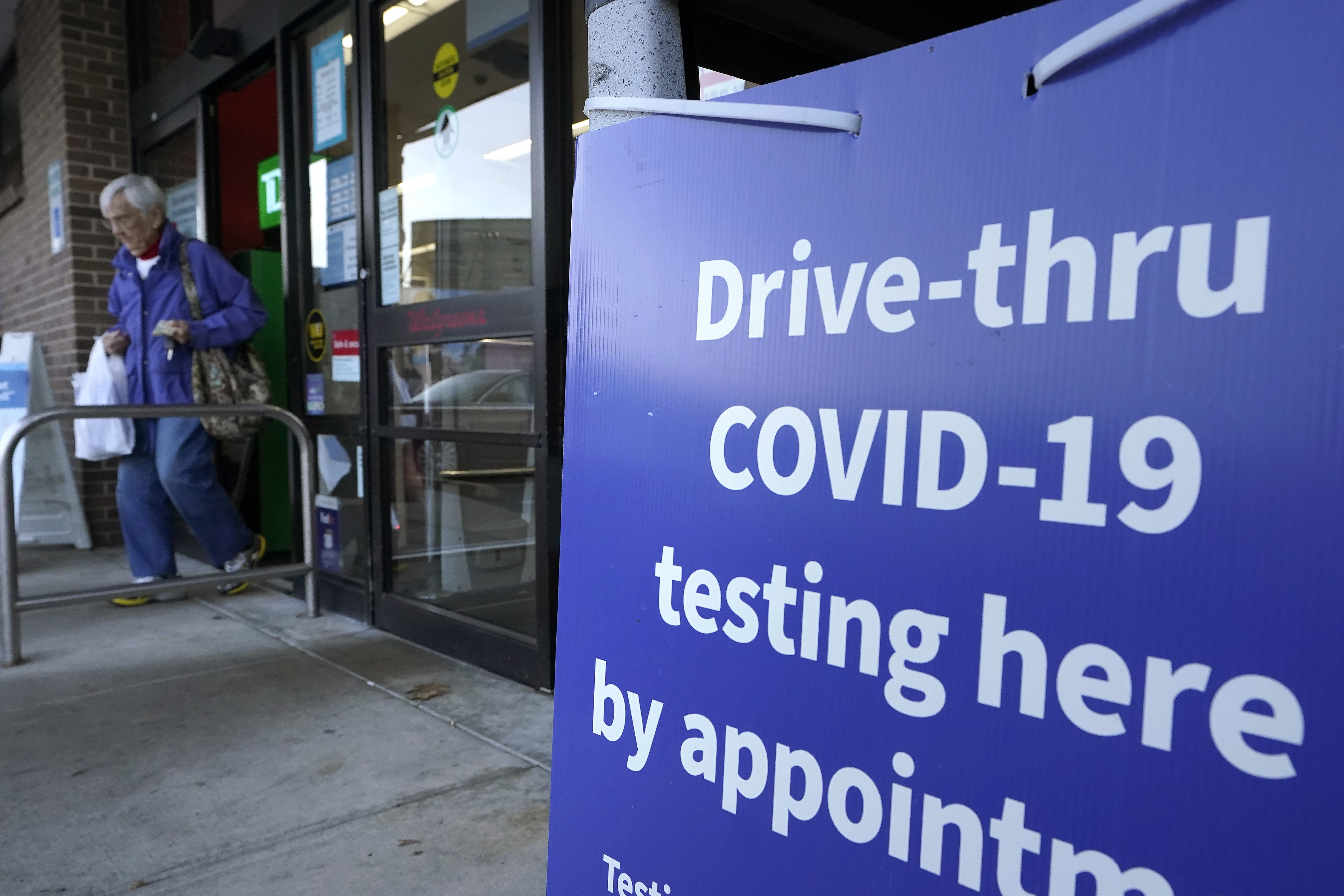 Saturday’s daily case record was the fourth in a row for the region after 335 cases were reported on Friday, 263 on Thursday and 228 on Wednesday.

Because of the recent explosion in new cases, the region’s seven-day moving average sits at 281.1, roughly 5.16 times higher than the average of 54.4 recorded two weeks earlier on Dec. 13.

However, due to testing backlogs and a dearth of available testing appointments, the number of active cases in London-Middlesex is likely higher.

The most recent death was reported Dec. 16, involving a man in his 90s not associated with a long-term care or retirement home. He was unvaccinated.

Announcement on Ontario schools coming ‘in the next couple days,’ Doug Ford says

As a result, the health unit stated last week that anyone developing any kind of respiratory symptoms should treat it like COVID-19 and self-isolate. Other members of the household should follow suit.

Information on local variants of concern can be found on the health unit’s summary of COVID-19 cases on the Middlesex-London page and the “Case Status” tab.

London Health Sciences Centre has paused reporting over the holiday period and updated case counts on Tuesday for the first time since Thursday.

While patient numbers were steady, cases among LHSC staff have surged as of Tuesday, to 104, up by 50 from Thursday.

A statement from LHSC said the positive staff cases are reflective of the widespread transmission of the COVID-19 virus in our community and due to an outbreak.

Senior leadership is working diligently to review strategic plans to ensure delivery of essential services is not interrupted, a statement said.

Hospital staff say there are not any known service disruptions due to the number of staff testing positive.

At St. Joseph’s Health Care London, 20 health-care workers were positive with COVID-19 as of the organization’s last update on Friday, up from 17 on Thursday.

Of those, one staff case was linked to an outbreak at Parkwood Institute’s main building.

One new institutional outbreak has been reported Tuesday. There are 10 outbreaks at local long-term care and retirement homes, according to the health unit:

At local schools, no new outbreaks have been declared. As of Tuesday, outbreaks remain active at the following 14 schools:

At child-care and early years settings, three outbreaks are active, with the most recent declared Thursday:

The number of active COVID-19 cases involving local schools has shrunk significantly since Friday, according to health unit data.

As of Monday, nine cases were active at local schools, down from at least 66 on Friday. The health unit notes its tally “lists schools … with one or more cases of COVID-19 in the last 10 days.”

Cases were also active at child-care and early-years centres:

Information on school and child-care centre outbreaks can be found in the outbreaks section.

The health unit says at least 600 cases have been reported since September involving elementary and secondary schools, as well as child-care and early-years centres.

In comparison, 470 cases were reported at elementary and secondary schools and at child-care and early-years centres between September 2020 and August 2021.

As of Dec. 25, the most recent data available, 82.1 per cent of residents five and older had received two doses of the COVID-19 vaccine, while 87.6 had received at least one dose.

As of Dec. 18, , the most recent data available, 19.7 per cent of people have received a third dose.

Children five to 11, who have been vaccine-eligible since Nov. 26, had a 44.8 per cent vaccination rate for first doses as of Dec. 25, while 3.5 per cent had received a second dose.

The health unit said it is prioritizing its supply of Pfizer vaccine for those aged 12 to 29. Those 30 and older will receive the Moderna vaccine.

Appointments can be booked online. Open slots fill up very quickly. Telephone booking is unavailable until Tuesday, and will also be unavailable on Jan. 3, 2022.

Unvaccinated residents, who make up only 12 per cent of the local population, made up 40.7 per cent of the region’s 26 hospitalizations over the last six weeks, according to the health unit.

Roughly 72.9 per cent of cases in that time period involved fully vaccinated individuals, while 19.8 per cent were unvaccinated.

The health unit notes that people who are vaccinated can still get COVID-19, however, those individuals “become less sick than individuals with COVID-19 who were not vaccinated, and are much less likely to require hospitalization or die.”

Of the nine COVID-19-related deaths reported in the last six weeks, four individuals were unvaccinated, four were fully vaccinated and one was partially vaccinated.

On the health unit’s website, residents can find information on pop-up clinics, mass vaccination clinics and pharmacies, as well as guidance for anyone vaccinated outside of the province or country, transportation support for those in need and more.

Anyone looking to be tested for COVID-19 can find information about the locations of testing sites on the health unit’s website.

Ontario Health Minister Christine Elliott said there were 8,825 new COVID-19 cases on Tuesday, a lower count compared with the rest of the week. The provincial case total now stands at 715,405.

Over the last three days, there were 9,418 new infections on Monday, 9,826 reported on Sunday and a record-breaking 10,412 new cases on Saturday. The seven-day average has now reached 8,318.

For comparison, last Tuesday saw 3,453 new cases and the previous Tuesday saw 1,429 new cases. Tuesdays typically have lower case counts due to testing from the weekend.

Despite the recent rise in cases, the number of people in ICUs due to COVID-19 has remained relatively stable, but is now on a slow rise.

Elliott says 90.7 per cent of Ontarians aged 12 and older have had one vaccine dose, while 88 per cent have received at least two.

No COVID-19 update was available on Tuesday from Southwestern Public Health.

On Friday, the health unit reported:

The death, reported on Friday, involved a woman in her 70s from Elgin and was the 13th COVID-19-related death reported in the region in December and the third that week.

The health unit automatically closes all cases 10 days after a positive result, regardless of their outcome.

On Friday, 13 people were hospitalized with COVID-19, with five in the ICU. No details were available about their vaccination status.

4:41
Beyond the border: When will travel return to normal for Canadians desperate to get away?

Beyond the border: When will travel return to normal for Canadians desperate to get away?

An outbreak at Caressant Care Bonnie Place in St. Thomas declared Nov. 28 was ongoing on Friday. It involves 11 resident cases and nine staff cases. Two deaths are associated with the outbreak.

More information on school cases can be found on the websites of the Thames Valley District School Board and the London District Catholic School Board.

As of Dec. 23, 76.0 per cent of those aged five and older in the region had received two doses of the vaccine, while 81 per cent have had at least one dose.

Information on where and how to get vaccinated can be found on the health unit’s website.

SWPH is not currently accepting calls for vaccine appointments “until we get through our current backlog of voicemails.” The health unit encouraged people to join its Same Day Vaccination List, which offers any leftover doses due to cancellations or no-shows.

No COVID-19 update was available from Huron Perth Public Health as of early Tuesday afternoon.

Among the 343 active cases on Friday, 87 were in Stratford, 64 were in Huron East, 34 were in North Perth, 23 were in Central Huron and 20 were in St. Marys. Full case counts by the municipality can be found on the health unit’s dashboard.

Five people were hospitalized as a result of COVID-19 as of Monday, with three patients still considered active cases.

HPPH had 11 active outbreaks listed on Monday involving 10 schools and one workplace. The most recent school outbreak was declared on Dec. 23, at Listowel Christian School.

As of Dec. 23, 82.5 per cent of residents aged five and older have had at least one COVID-19 vaccine dose while 77.6 per cent are fully vaccinated. Third-dose coverage stands at 21.4 per cent.

The region’s test positivity rate was 3.8 per cent for the week of Dec. 12.

Information on how and where to get a vaccine can be found on the health unit’s website.

A brief COVID-19 update was released by Lambton Public Health on Tuesday. The health unit’s next detailed update is set to come Wednesday.

On Tuesday, the health unit reported:

The three deaths all involved people who were hospitalized, one in their 50s and one each in their 60s and 80s. All died in hospital between Dec. 23 and 27. Details on their vaccine status were not released.

As of Friday, there were 14 COVID-19 patients in the care of Bluewater Health. No update was provided Monday.

No further information was released as part of the health unit’s brief update.

1:40
COVID-19: Flights cancelled in US as Omicron surge wreaks havoc on holiday travel

COVID-19: Flights cancelled in US as Omicron surge wreaks havoc on holiday travel

LPH reported 10 active outbreaks as of Thursday, eight of which were at unidentified workplaces:

Those who are able to get vaccinated on short notice are encouraged to sign up for Lambton Public Health’s daily Vaccine Standby List.

— with files from Matthew Trevithick, Gabby Rodrigues, Jacquelyn LeBel and The Canadian Press