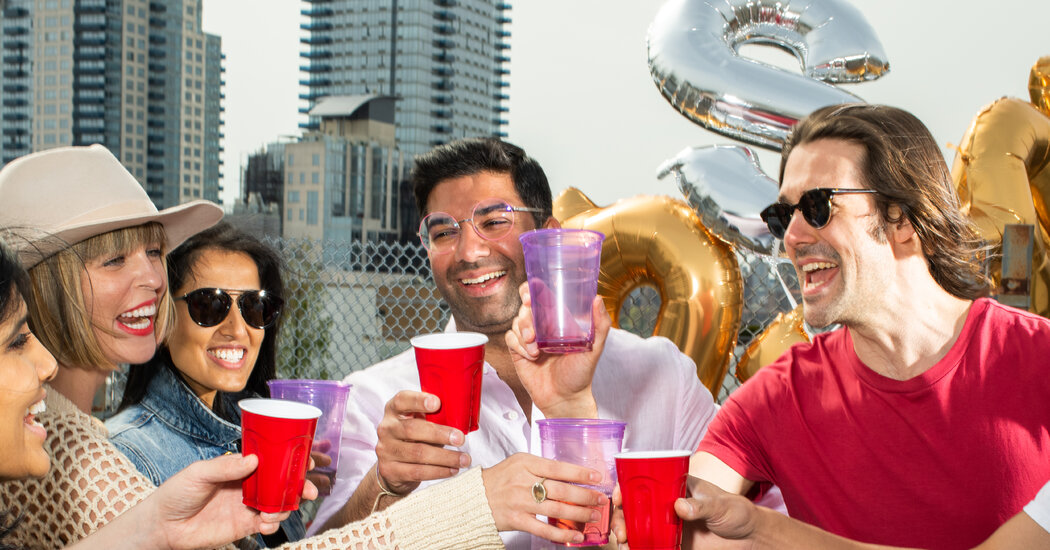 Their friends are having babies. They’re starting companies. So why not throw a “business shower” to celebrate that life change?

Sid Singh, 36, was joking recently with a friend that everyone he knew seemed to be having their third baby while he was bringing something entirely different into the world. He had just quit his consulting job to build a financial coaching company. It dawned on him that he could have a baby shower for his new endeavor.

“It’s a big shift for someone in their 30s to quit their job and restart their life,” said Mr. Singh, who lives in Brooklyn. “It’s probably one of the most momentous things you can do.”

In November, long before he had investors, a public relations budget or a stream of clients for the company he called Ready.Steady.Money, Mr. Singh gathered about 30 friends at an outdoor Italian restaurant in the Williamsburg area of Brooklyn. Over pizza and beer, he explained his vision and asked for support. The event went so well he held another shower in April on a rooftop in Williamsburg, with gold balloons in the shape of dollar signs and many toasts over bottles of rosé.

“Some of my friends were like, ‘Send me your deck’ or ‘I know people who would be great for it,’” he said. “I also had about 15 friends sign up for the program.”

Across the United States, especially in New York City, entrepreneurs are appropriating the baby shower, an event previously reserved for expectant parents, usually mothers. The idea is that if building a business is just as comprehensive (and expensive!) as having a baby, why not build in the same kind of communal support?

Some business showers include games, decorations and catering. Some founders even ask for gifts, providing links to business registry websites that have also become popular. Business showers generally differ from launch parties because they occur at the very early stages of a start-up, sometimes when the business is still just gestating as an idea.

“I would say the beauty of a business shower is it’s kind of a new concept, and it’s kind of whatever you want to make of it,” said Dulma Altan, founder of Makelane, a master class for female founders. It offers a free virtual kit called Startup Stork to help people plan business showers. Over 1,300 have been downloaded in 2021.

Some invitees don’t love the idea of these “business showers.” But investors seem to. Having the wherewithal to throw yourself a party is a promising sign.

“Investors appreciate someone who has gone through the effort of being scrappy and doing whatever it takes to start your company,” Ms. Altan said. “It shows you are resourceful. It shows you can rally people around your brand.”

“Hopefully,” Mr. Singh said, “it shows that I have a sense of humor and can think a little bit more creatively around traditional ideas of entrepreneurship.”

Female founders, in particular, are attracted to the idea of a business shower because it helps them formally celebrate something that is not a life cycle event.

“We are no longer living in a world where the biggest milestones, especially for a woman, are getting married and having a baby,” Ms. Altan said. “We are overdue to have the conversation about how we celebrate women.”

Indeed, Caitlin Kelly, 36, who lives in New York City, was building her new business, Vivid + Co, a company that is using technology to help businesses more effectively engage with the media, when she found out she was pregnant.

“I remember when I first started telling people I was pregnant, I had never been congratulated like this for anything in my life,” she said. “I know people were coming from a place of love and excitement, but for me, launching the business was that for me.”

Not wanting her to abandon celebrating one growing endeavor for another, her mentor suggested she combine a baby shower with a party for her business. Ms. Kelly had the invitations read: “It’s just business, baby.”

The event took place on a Saturday in May. A small group of family and friends were invited to the first half of the festivities, which resembled a more traditional baby shower with gift opening and a competition to guess when the baby would arrive. The bigger party was held in the evening and included clients, investors and employees. Caterers passed around mini steak frites and avocado toasts, while a bartender served cocktails and wine. Ms. Kelly gave a speech about the business.

“I don’t want anyone in my company to feel like my baby is a separate part of my life that I don’t want to share with them,” Ms. Kelly said. “People understand that life is complex. Everybody has a lot of stuff going on.”

For other founders, having a business shower is a much needed opportunity to ask for gifts.

Thkisha Sanogo, 41, remembers how helpful it was to receive presents before the births of all three of her children, now ages 9, 11 and 13. “You have so many decisions you have to make and things you have to buy, it’s overwhelming,” she said. “But if you know your family and friends are there to support you, it makes it easier.”

So in 2019, when she launched MyTAASK, an office management software company, she had an all-out baby shower in a co-working space. There was homemade gumbo, games including “guess the tagline of my company” and a maven of honor who helped decorate the room in the company’s colors.

There was also a gift registry.

Using Business Gift Registry, a website started in 2019, Ms. Sanogo, who lives in New York City, registered for items she needed for her start-up. She received subscriptions for Calendly, event scheduling software and gift cards for Staples. Others paid registration fees for conferences she hopes to attend, like the Atlanta Black Tech Week, or contributed to the cost of airline tickets for meetings. “I got about $10,000 worth of gifts,” she said.

She also received $5,000 in cash gifts. “I leveraged another $5,000 by going back to investors with it and saying: ‘I was able to raise this amount of money already. Do you mind supporting us?’”

The Business Gift Registry has had 25 percent growth in the second quarter of the year, said Zuley Clarke, its founder, who is also based in New York City. “It’s hard for founders to ask people for help, but I am seeing more people willing to do it,” she said.

Founders taking this leap have faced some opposition.

“Some people didn’t get why I had a registry for my business,” Ms. Sanogo said. “Some people saw it as a handout. They believed I should be tough and take the burden on myself.”

“To those people, I said, ‘I would appreciate you being open minded,’” she said. “But I will say I got much more warm reception than negative reception.”

He laughed it off, but he did explain to his friends why he was doing this. “People need to understand I am basically committing my entire life to this,” he said. “I am taking the biggest risk I can.”

Tom Brady, who won a record seven Super Bowls for New England and Tampa, has announced his retirement. Brady – the most successful quarterback in...
Read more