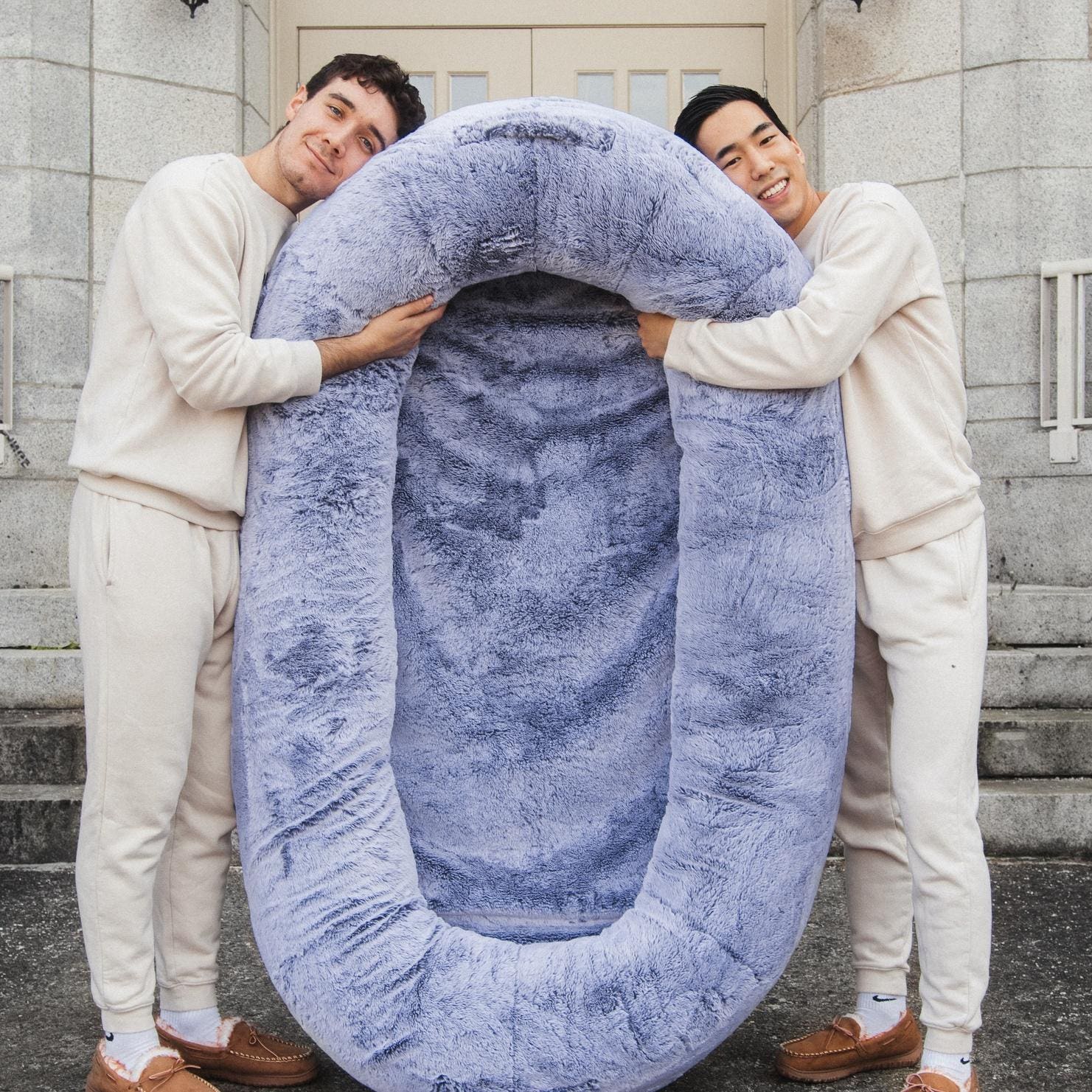 Yuki Kinoshita and Noah Silverman were classmates at the University of British Columbia’s Vancouver School of Economics when they discovered in freshman year that they shared a passion for both entrepreneurship and…napping.

“Noah and I are big nappers,” says Kinoshita. “In college, we’d each find 25 minutes a day for a nap somewhere.”

But there was one problem. Cozy places to nap were hard to come by. Dorm-room mattresses are notoriously uncomfortable.

Coveting the dog bed in which they saw a large pooch curled up at a local coffee shop, they decided there was no sense reinventing the wheel. They set to work creating a human-sized prototype of The Plufl—which they dub “the world’s first dog bed for people”— with the help of a local seamstress—who used pillow stuffing from Ikea and foam from a local foam shop—and a product designer who had worked for a cat-bed company. Collaborating with pros helped them ensure the product would be comfortable for customers of all sizes.

They completed their prototype in September 2021. Launching a pre-order campaign on the crowdfunding site Kickstarter in April 2022, they raised $290,657 from 799 backers, more than 10x their $25,000 goal. “Everyone was telling us they wanted the product,” says Kinoshita.

To find a manufacturer, they researched weighted-blanket makers in North America and winnowed down the list to the factory that could produce the best-quality products. The two founders, currently operating from the basement of Silverman’s parents’ house in Seattle, were planning to fly to Kentucky to retrieve a batch of Plufls from their warehouse and personally deliver orders to early supporters as far north as Canada when Kinoshita spoke with me several weeks back.

Thanks to a series of viral TikTok videos they introduced (here’s a sample), $20,000-$30,000 worth of paid Facebook and Google Search ads, and an appearance on Shark Tank in October 2022, the business took off quickly. The entrepreneurs crossed $1 million in revenue around Black Friday, according to Kinoshita.

The beds are 68 inches long and 38 inches wide but, made of orthopedic foam, weigh less than 20 pounds. Despite their relatively light weight, shipping has been a substantial cost in today’s business environment.

“We made a mistake on our first crowdfunding run,” says Kinoshita. “We opted for boxes a few inches too big and got hit with an extra $10 per box in extra shipping charges. We subsidized that cost. Lesson learned.”

So far, many customers for The Plufl are millennials and pet owners, Kinoshita says. Some are parents looking for a novelty gift for their children. But new audiences are emerging, including people with sensory issues who like the soft fur.

Some are pet owners. When Kinoshita and I spoke, he was staying at a hotel in Beverly Hills, where he was in town to deliver the dog beds to social media influencers in the “dog-influencer” community, who are also interested in the beds. “People in the dog-influencer community are very passionate about their pets,” he says.

But it’s still too soon to tell whom the primary customers will be. “We’re selling at high velocity now,” says Kinoshita. “A lot of people haven’t tried the product yet.”

Genevieve Cragg is pleased to see charges laid in the tragic tugboat incident in 2021 that claimed two lives, including her son Charley’s. “It’s not...
Read more

Three companies based in California will pay a total of $530,000 to settle allegations that they violated Paycheck Protection Program (PPP) rules.Settlement Reached in...
Read more

The Burnaby Urban Search and Rescue Team is heading to Turkey to help in the aftermath of the deadly earthquakes that devastated Turkey and...
Read more