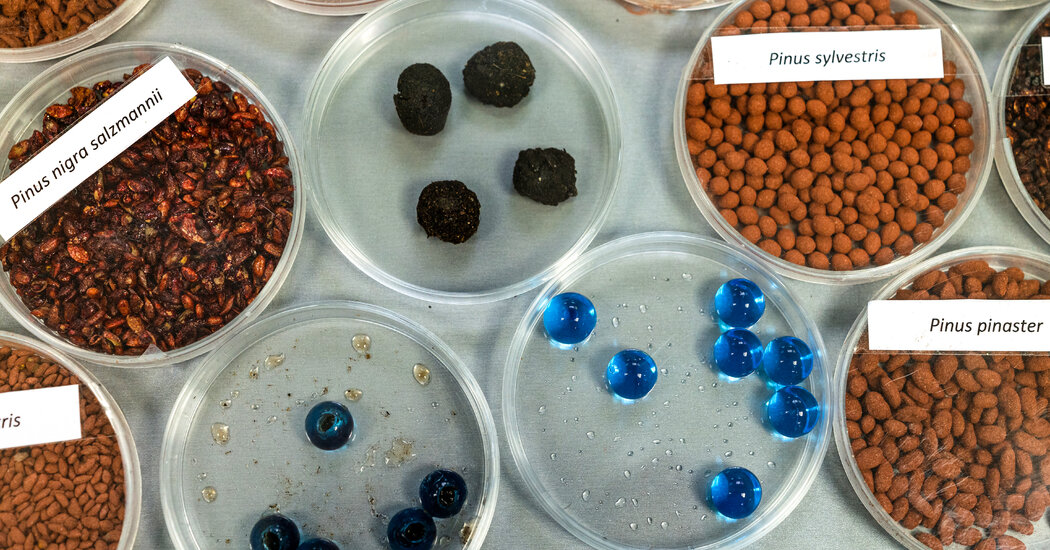 A start-up in Spain is one of several around the globe betting on that possibility.

This article is part of a special report on Climate Solutions, which looks at efforts around the world to make a difference.

With experience in improving systems for restaurant chains, supermarkets and for the department store El Corte Inglés, he imagined his know-how could be applied to the task of reversing deforestation.

“I knew that if reforestation could be made efficient and profitable, the world would have a lot more trees,” he said.

Taking time out from work, he bought a box of Empress tree seeds — a fast-growing species, capable of reaching 20 feet in one year — and flew back to his hometown in Spain determined to learn to plant trees and put his idea into practice.

Mr. Sesma, 38, is among a growing group of world citizens who are not only concerned about the future of the planet but are trying to find innovative solutions to save it. Thanks in part to the influence of the young environmental activist Greta Thunberg and initiatives such as Prince William’s Earthshot Prize, they are getting more attention.

But it wasn’t always the case.

At the beginning, only one person believed in Mr. Sesma’s scheme — a Cistercian monk who tends to the orchards at the Monasterio de la Oliva, close to Mr. Sesma’s family home.

On a recent morning, Friar Enrique Carrasco, 83, pushed a wheelbarrow around the monastery’s vegetable plot. Dressed in blue overalls rather than a cassock, he explained how he had taught Mr. Sesma to nurture and plant his Colombian seeds on a field that lay fallow within the monastery’s grounds.

Together, Mr. Sesma and Friar Carrasco watched the seeds grow into saplings and then into trees so tall the Spanish government’s State Meteorological Agency complained they were overshadowing a nearby meteorological station.

There was another problem. The seeds were too invasive a species to be compatible with Mr. Sesma’s dreams of biodiverse reforestation. But he wasn’t deterred.

Now, the three-year-old start-up he co-founded, CO2 Revolution, is using big data analysis and sophisticated drone technology to sprinkle — over inaccessible deforested terrain — millions of lab-enhanced seeds for trees that are native to Spain’s forests and suited to recreating lost ecosystems.

It is a challenge. According to the Ministry for the Ecological Transition, 95,000 hectares of forests — almost 0.35 percent of Spain’s total surface area — are devastated by more than 11,000 wildfires every year. Traditional reforesting methods are slow and costly because disaster zones are often inaccessible or inhospitable to machinery.

With governments around the world having set a goal of netting zero — that is, balancing emissions with removal of greenhouse gases — by 2050, forests will be at the center of discussions at the COP26 climate summit in Glasgow over the next few days.

Marc Palahí, chief executive of the European Forest Institute, hopes the talks will focus on policies to scale up global reforestation by attracting investment in a new bio-economy. He said he believed that sustainably produced wood products — such as biopharmaceuticals, bio-textiles and construction materials — could provide over a trillion dollars’ worth of business opportunities and jobs.

In a phone interview, he agreed that “drones are a big help in remote areas.” But key to meeting global reforestation targets, he said, is sustainable forest management.

“Planting trees is not as difficult as managing them over the next few decades,” Dr. Palahí said.

When Mr. Sesma and his co-founder Javier Sánchez set up CO2 Revolution in February 2018, their goal was simple enough: plant trees to remove carbon dioxide from the atmosphere.

The company has three lines of business. It offers consulting services to businesses keen to measure and reduce their emissions. Clients can also mitigate their carbon footprint by hiring CO2 Revolution to plant on degraded land, using a mix of modern machinery and traditional methods and often involving local communities. In the third line of business, both more revolutionary and challenging, CO2 Revolution sows entire forests with cost-efficient drone technology. Then it sells carbon credits.

Things moved slowly at first. Mr. Sánchez, 33, who gave up his job as a sales manager at a German supermarket company to join forces with Mr. Sesma, said, “It was such an innovative idea, that people saw it as surreal.”

During those first months, the entrepreneurs met in cafes and threw their savings into their company. They hired machinery to encapsulate seeds with nutrients to help them germinate. They fitted drones with tailor-made dispensers. And they sought permissions from landowners and the Spanish authorities to sow.

But on their first attempt at aerial reforestation, only a tiny percentage of the seeds took root: some landed on stones; others rolled down slopes; those that did nestle into the soil were eaten by mice and rabbits.

Still, it got them noticed. In October 2018, CO2 Revolution was named one of the 100 best start-ups in the world in a competition organized by the innovation platform, South Summit.

Soon after, CO2 Revolution landed its first big client, the multinational corporation, LG Electronics Iberia, which hired them to sow trees on burned land outside Madrid. An agreement was also signed to use LG’s screen technology for improved drone flight precision.

The client list began to grow and investors, such as the Regional Government of Navarra, were attracted.

Mr. Sesma and Mr. Sánchez brought on board a handpicked group of microbiologists, engineers and software programmers.

On a recent morning, in his sun-drenched lab in central Spain, a forestry engineer, Jaime Olaizola, gestured toward a stack of plastic dishes containing samples of pine and cedar seeds.

Dr. Olaizola, 47, who specializes in researching micro-organisms in the soil, explained that the seeds, which he calls iseeds, are designed to anticipate problems they will encounter when dropped into the wild. Their clay coating is the key. It contains a potent mix: plant extracts to dissuade rodents; dried hydrogel to retain humidity; fungi to boost defenses; and Bohemian truffle to capture nutrients and stimulate root development.

Once the seeds grow into seedlings, photosynthesis kicks in and nature takes over.

Andrew Heald, director of NGPTA, a forest restoration company, is wary. He agrees that while drones may reforest the planet faster than humans, many seeds must be scattered for just one to germinate.

His expectation, based on experiments in his lab, is for 50 percent of this year’s air-sown iseeds to grow into trees. He will not know for sure until the November to April seeding season is over.

Similar initiatives have cropped up across the globe. A Canadian start-up, Flash Forest, has developed a mechanical device that shoots seedpods from drones deep into the soil. In Australia, Dendra Systems is using aerial seeding techniques to restore koala forests.

Stéphane Hallaire’s Paris-based company, Reforest’Action, has used rudimentary tools — shovels and spades — to plant 17 million trees in 40 countries over the last decade. Mr. Hallaire said using drones was a viable method for capturing CO2 in countries with vast unpopulated areas, like Canada or China. But he said he favored involving local communities and empowering a new generation of entrepreneurs to develop a more sustainable form of reforestation.

“The trees need to improve people’s living conditions so that they are not cut down,” he said.

In keeping with the European Union pledge to plant an extra three billion trees within its member states before 2030, Mr. Sesma and Mr. Sánchez said they would be satisfied when there was one extra tree planted for every person on the planet, every year.

An ambitious goal, but Mr. Sánchez said, not unattainable: “With technologies like ours, it is possible.”