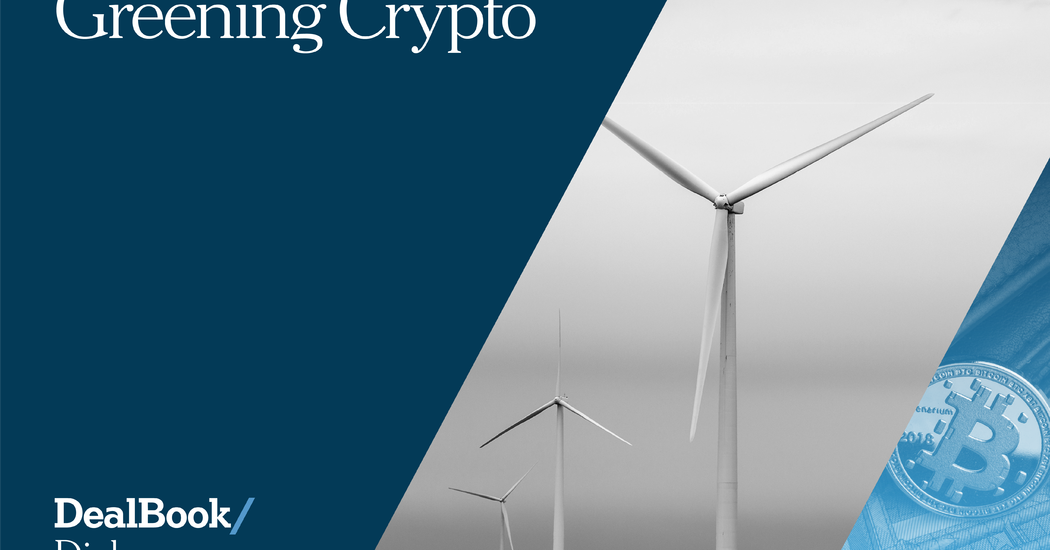 The cryptocurrency industry is growing quickly, as are concerns about its environmental impact. The original and most popular crypto, Bitcoin, is energy-intensive by design, “mined” by millions of high-powered computers around the world.

That puts enthusiasts in a tough position. They say crypto tokens will power a decentralized internet, changing the economics of banking, finance, gaming, shopping, entertainment and even human interaction.

But if crypto, already worth $2 trillion, is the future, this industry — like any other — can’t afford to ignore climate change and must embrace sustainability. Ether, the second-most popular cryptocurrency, uses a lot of power, like Bitcoin, but its developers are planning a transition to a mining method that is more friendly to the environment.

Below are edited passages from the discussion. You can listen to the full debate in the audio player above.

Much of crypto’s environmental impact comes from the energy used by computers to generate new digital tokens, via a process called “proof of work.” This requires a lot of processing power: By some measures, the server farms that compete to generate new Bitcoins use as much electricity annually as a small country, like Chile or Belgium.

DealBook: Why does crypto mining use so much energy?

De Vries: Mining is creating new blocks for the Bitcoin blockchain. Those transactions will return rewards, paid in Bitcoin. The energy consumption is in the part where you are trying to complete these blocks for the blockchain. You have about three million machines around the world participating in a massive game of ‘guess the number,’ generating 140 quintillion guesses every second of the day, nonstop. Then, they get to create the next part for the blockchain, but that’s the energy consuming part. And not every cryptocurrency needs that.

Given newer cryptocurrencies that use less energy, is Bitcoin mining already outdated?

Breitman: I started a competing project, but I think it’s telling for the purposes of our discussion that basically no cryptocurrency that has launched in the last four or five years has used proof of work, and that’s because it’s antiquated technology. I would argue that the associated energy costs, some are justified because of the goal of what they do. But I would qualify that. Using a technology that creates an unnecessary amount of tax on the environment — which, as someone who believes in man-made climate change, I’m very inclined to not endorse.

Bitcoin as a battery

Green energy goes to waste if it’s not used when generated. Batteries that can store renewable power for when the sun isn’t shining or wind isn’t blowing are the holy grail of the energy industry. For now, these don’t exist at the necessary scale. But some see a way that Bitcoin could function as another sort of “battery.” It could store the value of renewable energy by converting intermittently available local solar and wind power into a globally traded digital asset with unlimited shelf life.

Another way Bitcoin mining can be made more sustainable, some argue, is to use “stranded” or wasted energy, for example capturing the power of flare gas at oil patches to mint digital money.

Can crypto mining be made sustainable?

Prager: When you have an electrical grid, you want that grid to become increasingly more sustainable. Have a lot more renewables. These are intermittent energy supply choices — hydro, solar and wind, which are all great, which we will be sourcing for our mining capacity. You want to have a load that is constant, which enables the grid to be robust. You have this load that is Bitcoin mining all the time, but that load could go away. It could be shut off in the 200 hours a year when there are supply strains. So it’s good for the grid. That’s good for everyone.

Does the metaphor of Bitcoin as a battery make sense?

Breitman: A one-way battery isn’t a battery. There’s Bitcoin mining in Texas. There was a crisis there and people were freezing. Why weren’t they able to use the energy stored in that Bitcoin battery? That’s not a battery.

How else can Bitcoin help with wasted energy?

Prager: At the end of the day, there is a massive amount of electricity in our country that is simply stranded or wasted. So again, context. You need spinning reserves here. You need flexible baseload facilities to be able to develop the grid if everyone wants sustainability, and I certainly do. That is what zero carbon emission Bitcoin mining does.

Does using excess energy to mine crypto make it more sustainable?

De Vries: Bitcoin uses a lot of energy, but if it’s a use of energy that would otherwise be going to waste then it’s not really a problem. And that’s a lot of the so-called stranded assets. But in a lot of cases those assets happen to be fossil fuel. China recently banned Bitcoin mining because these Bitcoin miners were ultimately responsible for the revival of coal mines. We are seeing similar examples in the U.S. and New York, where a gas plant was revived from mining Bitcoin.

An often-overlooked factor in the environmental cost of crypto is the mining hardware, which becomes outdated quickly and generates toxic electronic waste.

Why is the equipment used for mining an environmental concern?

De Vries: Bitcoin miners are trying to make more profitable equipment all the time, and those machines are improving at a rapid rate. They are older generations pretty quickly and they are so specialized. That’s not just about carbon emissions, but also pushing up I.T. equipment waste. It’s also toxic materials. That’s water pollution, and parts in the incinerator at some point, and that no amount of renewables can ever fix.

Are there other hardware issues?

De Vries: Mining requires highly specialized equipment. As soon as the Bitcoin price runs up, what happens is the money that goes to Bitcoin mining goes up. They have a big incentive to add more machines. As soon as that goes up, they, first of all, impact that global semiconductor supply chain. You could instead have made a chip for maybe a personal computer or electric vehicle or anything else. It is hard to quantify what the consequences are of that.

Two forms of regulation are likely when it comes to crypto’s environmental cost, Mr. Prager said. The first type would require more transparency about the carbon costs of running a crypto business, and the second would impose some sort of carbon tax. “We think at the end of the day that people who choose to run businesses that use fossil fuels will have higher costs than people who have businesses that don’t use fossil fuels,” he said.

Environmental and economic justice organizations are pressing for these types of requirements. This week, more than 70 nonprofits, including Sierra Club, the Open Markets Institute and the Action Center on Race and the Economy, urged Congress to factor crypto’s energy use into any new rules for the sector. “As you explore legislative and regulatory responses to ensure investor protection in the industry, it is critical that you also consider the financial stability risks that climate change presents,” they wrote in a letter to congressional leaders.

But the wheels of government turn slowly and crypto is developing very quickly, so it will likely be up to the industry to embrace sustainability with the same intensity as it has innovation.

We hope you can join us for our next DealBook Dialogue call on “The Business of Longevity.” On Oct. 12 at 1 p.m. Eastern, David Sinclair, a Harvard researcher and biotech company founder, will discuss the billions of dollars being invested into the idea of immortality and the realities of altering the aging process. R.S.V.P. here.

What do you think? How can crypto be made more sustainable? Let us know: dealbook@nytimes.com.