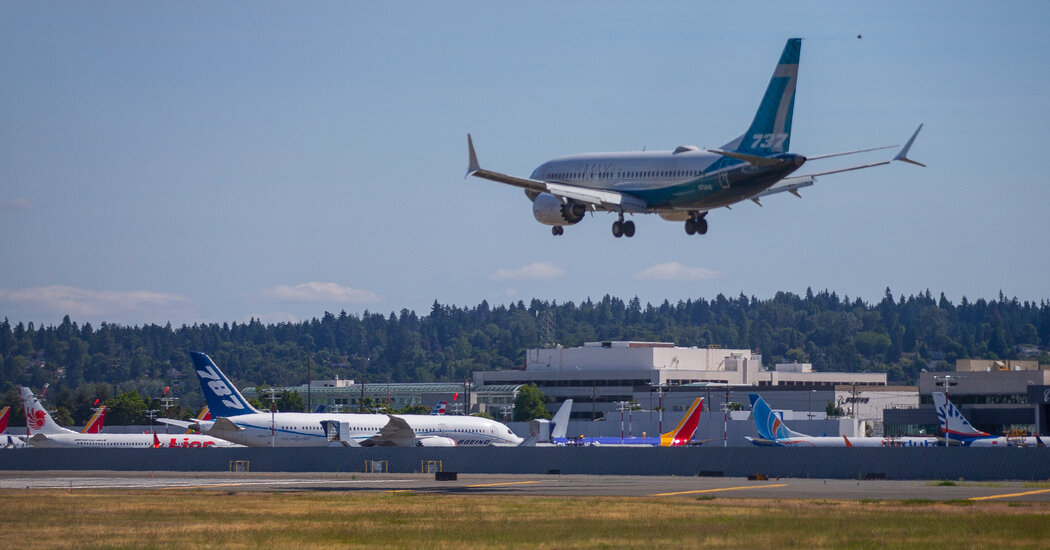 A group of current and former Boeing directors has agreed to settle a shareholder lawsuit over a pair of fatal crashes that led to the global grounding of the company’s 737 Max jetliner for nearly two years.

Under the proposed settlement, announced Friday, Boeing would make safety and oversight changes, including the creation of an ombudsman program through which employees would be able to raise workplace concerns. The company would also add a board member with expertise in aviation, engineering or product safety oversight, and the defendants would pay $237.5 million to Boeing — benefiting the shareholders — through the directors’ insurers. The directors being sued denied any wrongdoing.

The lawsuit was filed in a Delaware court last year by the New York State comptroller, Thomas P. DiNapoli, who oversees the pension fund for state employees, and by the Fire and Police Pension Association of Colorado. They accused Boeing’s board of failing to adequately oversee the company, allowing lapses that led to crashes of the Max in Indonesia and Ethiopia, killing 346 people.

“This settlement will send an important message that directors cannot shortchange public safety and other mission-critical risks,” Mr. DiNapoli said in a statement.

Aviation authorities around the world banned the Max from flight in March 2019 until late last year, when the Federal Aviation Administration approved it again. Since then, the plane has carried out tens of thousands of flights without incident. The episode cost Boeing billions of dollars, damaged its reputation and attracted scrutiny from lawmakers.

In a statement, Boeing said it had taken steps to improve aviation safety since the two crashes, including a number of organizational changes and other reforms. This year, the company also added two new board members with significant aviation experience: Lt. Gen. Stayce Harris, an experienced pilot, and David Joyce, the former chief executive of the engine maker GE Aviation.

“Today’s proposed settlement builds on those actions with additional oversight and governance reforms that will further advance safety and quality in the work that we do,” the company said.

The settlement, reported earlier by The Wall Street Journal, is subject to court approval.

Last month, a federal grand jury indicted a former top Boeing pilot in connection with statements he and the company had made about the Max, and, in January, Boeing reached a separate $2.5 billion settlement with federal authorities over the debacle.

The Service Employees’ International Union (SEIU) in Saskatchewan has launched a petition calling for safer parking conditions after several nurses reported being harassed on...
Read more