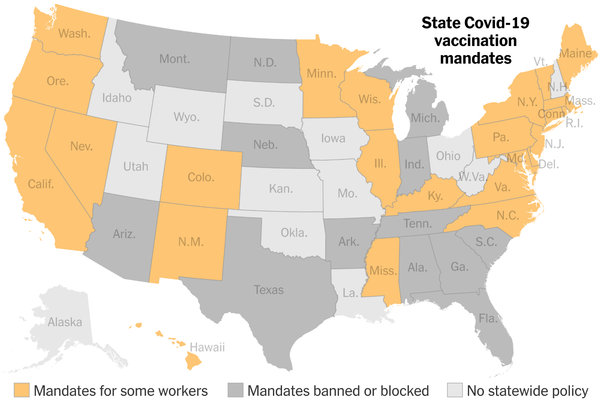 The decision, by a split three-judge panel, overturned a ruling that had blocked a Biden administration rule requiring companies with 100 or more employees to mandate vaccinations or testing for workers.

A federal appeals panel on Friday reinstated a Biden administration rule requiring larger companies to mandate that their workers get vaccinated against the coronavirus or submit to weekly testing by early January.

The decision, by a split three-judge panel of the U.S. Court of Appeals for the Sixth Circuit in Cincinnati, overturned a ruling last month by its counterpart in New Orleans, the Fifth Circuit, that had blocked the government from carrying out the rule.

The contested rule, issued by the Department of Labor’s Occupational Safety and Health Administration, or OSHA, has faced a wave of lawsuits from businesses and Republican-controlled states. Several challengers immediately said they planned to file or already had filed emergency motions with the Supreme Court to block the rule.

“The record establishes that Covid-19 has continued to spread, mutate, kill and block the safe return of American workers to their jobs,” wrote Judge Jane B. Stranch. “To protect workers, OSHA can and must be able to respond to dangers as they evolve.”

The White House welcomed the decision.

“The OSHA vaccination or testing rule will ensure businesses enact measures that will protect their employees,” Kevin Munoz, a White House spokesman, said in a statement. “Especially as the U.S. faces the highly transmissible Omicron variant, it’s critical we move forward with vaccination requirements and protections for workers with the urgency needed in this moment.”

A New York Times analysis shows that thousands of public employees in every state are subject to federal, state or city vaccine mandates — but these requirements have not provided a significant boost to overall vaccination rates.

The National Retail Federation, one of the trade groups suing against the mandate, said it would “consider additional legal options. We will also continue to prepare our members to comply with this onerous mandate.”

President Biden announced in September that his administration would develop the rule as one of several steps to try to increase immunization rates and curtail the pandemic, which has killed more than 800,000 Americans so far. Other mandates applied to federal employees and federal contractors.

The rule for large employers, which OSHA issued last month, forces such companies to require vaccinations by Jan. 4 and to require unvaccinated employees to wear masks indoors.

Employers also are allowed to give their workers the option to be tested weekly instead of getting the vaccine, though they are not required to do so unless the worker has an exemption for medical or religious reasons. The rule makes an exception for employees who do not come into close contact with other people at their jobs, such as those who work at home or exclusively outdoors.

The administration estimated that 22 million people would get vaccinated and that 250,000 hospitalizations would be prevented because of the rule, which applies to more than 84 million workers.

Under a 1970 law, OSHA has the authority to pass a so-called emergency temporary standard, imposing new rules for workplace safety, provided it can show that workers are exposed to a “grave danger” and that the rule is necessary.

The Fifth Circuit panel ruled last month that the agency had exceeded that authority, blocking the government from carrying out the mandate. But the case was then reassigned to the Sixth Circuit, which was randomly chosen to consolidate numerous challenges against the rule that had been filed around the country.

In dissolving the Fifth Circuit’s block on Friday, the majority of the Sixth Circuit panel said that the agency had sufficiently demonstrated that measures against the coronavirus pandemic meet the standard laid out by Congress in the 1970 law that created the agency.

“OSHA has demonstrated the pervasive danger that Covid-19 poses to workers — unvaccinated workers in particular — in their workplaces,” Judge Stranch wrote, adding that the possibility of new variants cited by the agency when it issued the rule “has borne out with the Omicron variant.”

The majority opinion also rejected a constitutional challenge to the rule.

Judge Stranch, an Obama appointee, was joined by Judge Julia Smith Gibbons, who was appointed by President George W. Bush. In a brief concurring opinion, Judge Gibbons signaled that as a matter of judicial restraint the courts should defer to OSHA’s expertise.

“Reasonable minds may disagree on OSHA’s approach to the pandemic, but we do not substitute our judgment for that of OSHA, which has been tasked by Congress with policymaking responsibilities,” she wrote, adding: “Beyond constitutional limitations, the work of an agency, often scientific and technical in nature, is outside our expertise.”

But Judge Joan L. Larsen, a Trump appointee, dissented, arguing — as had the Fifth Circuit panel before her — that the agency had exceeded its legal authority.

A new U.S. surge. The C.D.C said that the Omicron variant’s rapid spread in the U.S. may portend a surge in infections as soon as January, but cases are already spiking, leading offices to cancel holiday parties, Broadway performances to be shuttered and college finals to be moved online.

The Omicron variant. The new Covid variant has been detected in dozens of countries. While Omicron appears to be able to partially evade antibodies, it could be less severe than other forms of the virus, and new laboratory studies indicate that vaccines, and especially boosters, may offer protection against severe disease.

Biden’s vaccine mandate. A federal appeals panel on Dec. 17 reinstated a Biden administration rule requiring larger companies to mandate that their workers get vaccinated against Covid-19 or submit to weekly testing by Jan. 4. A day later, the Labor Department said that it would delay that deadline until Feb. 9.

Pfizer vaccine in younger children. The company said that a low dose of its coronavirus vaccine did not produce an adequate immune response in 2- to 5-year-olds in ongoing clinical trials. The setback threatens to keep the vaccine from younger children for longer than many had hoped.

All of the judges on the Fifth Circuit panel that had blocked the rule were conservative Republican appointees.

Challengers to the decision could appeal directly to the Supreme Court, which is controlled by a conservative bloc of six Republican appointees. (The Supreme Court this month refused to block New York’s requirement that health care workers be vaccinated against the coronavirus even when they cite religious objections.)

Challengers could also appeal to the full U.S. Court of Appeals for the Sixth Circuit. Of its 16 sitting judges, five were appointed by Democrats and 11 were appointed by Republicans. (However, one of the Republican appointees, Judge Helene N. White, was originally a nominee of a Democratic president, Bill Clinton, before being renominated by a Republican one, George W. Bush, as part of a political deal.)

Conditions on the ground are rapidly changing, with new cases surging, apparently because of the more-infectious Omicron variant. The Justice Department last month warned that keeping the mandate from coming into effect “would likely cost dozens or even hundreds of lives per day, in addition to large numbers of hospitalizations, other serious health effects and tremendous costs.”

The OSHA rule, alongside a separate requirement for federal contractors, has helped drive a number of large companies to announce a form of vaccine mandate, including Procter & Gamble, IBM and American Airlines. Others, like Tyson Foods and Google, introduced mandates on their own, in the face of the rising risk of the Delta variant.

But while some companies welcomed the OSHA requirement as a cover to move forward, others have resisted, citing concerns about exacerbating an already-challenging labor shortage. Some of the largest private employers, including Walmart and JPMorgan Chase, have yet to outline a broad mandate for all employees.

The Biden administration’s rule requiring vaccinations for federal contractors and their employees remains held up in litigation, and a number of employers, including Boeing, Amtrak, General Electric and Union Pacific, have suspended their vaccine requirements.

A recent poll of 543 companies by the consulting firm Willis Towers Watson found that 57 percent of firms either required or planned to require Covid-19 vaccinations. That included 32 percent that planned to mandate vaccines only if the OSHA rule takes effect. Seven percent said they planned to carry it out regardless of the outcome.

The US Small Business Administration (SBA) has announced the six recipients of the ‘Boots to Business Instructor of the Year’ award.SBA Awards Instructor of...
Read more