Biden Promised to Fix Home Care for Seniors. Much More Help May Be Needed. 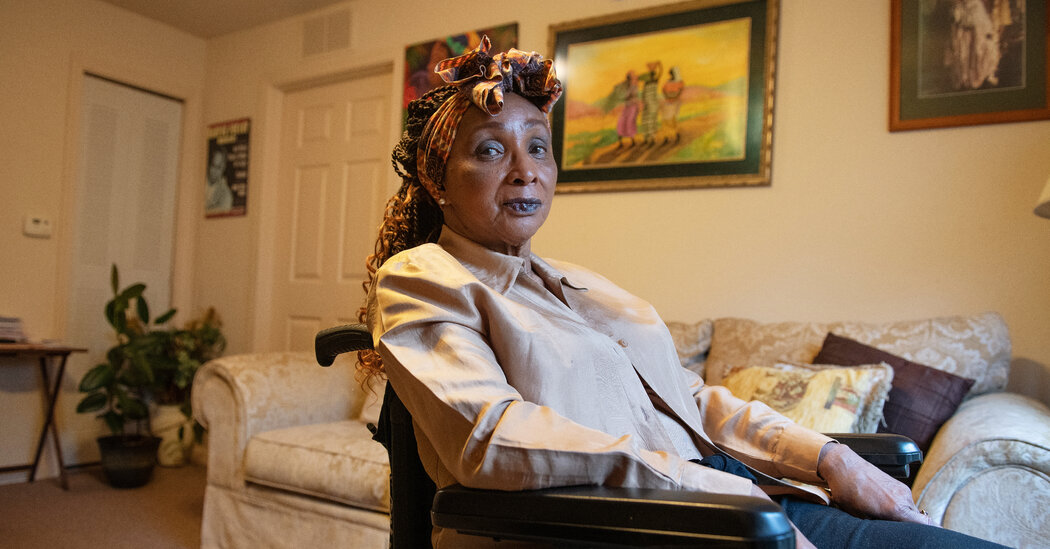 The latest Democratic proposal would funnel $150 billion toward subsidized home and community-based care. Experts worry that may not be enough to ease the severe shortage of workers.

Spinal surgery four years ago left Alene Shaheed in a wheelchair and dependent on short daily visits from home health aides to help her get around.

But her support system fell apart this year during the prolonged coronavirus pandemic, and her routine care became unpredictable. Four agencies serving her hometown, Jacksonville, Fla., failed to provide aides regularly, due to severe shortages of the low-wage workers.

“If no one comes for three days, I don’t get a bath for three days,” said the 76-year-old. “I don’t have anyone to fix meals, so I’m eating ramen noodles until someone gets there.”

About 800,000 people are on waiting lists to receive subsidized home care. For millions of Americans, finding reliable and affordable assistance to stay at home — instead of moving into a nursing home, where Covid-19 killed tens of thousands of people — has never seemed more urgent.

Expanding home and community-based services is part of the legislative package that President Biden and Democrats have proposed. At this stage of negotiations in Congress, the amount for such programs under Medicaid — partly to increase the historically low wages of home care workers — has been reduced to $150 billion from $400 billion over eight years.

“We’re going to expand services for seniors so families can get help from well-trained, well-paid professionals to help them take care of their parents at home — to cook a meal for them, to get their groceries for them, to help them get around, to help them live in their own home with the dignity they deserve to be afforded,” Mr. Biden said on Thursday.

Will the amount in the current plan be enough? Supporters say the new health care money would shift Medicaid’s decades-long bias away from nursing home care. Many experts doubt promises that this round of funding can fix a system as broken as home care, especially as the growing retirement of the boomer generation requires more assistance to stay independent and strains health care funding.

“You have to be very realistic about the amount of need you have in the system right now,” said David Grabowski, a professor of health care policy at Harvard Medical School. The $150 billion does represent a significant influx of funds, but there are limits, he said: “Once you start to do the math, the dollars don’t go as far as you’d like.”

States are required to use Medicaid funds to cover nursing home care, but states have considerable leeway under federal regulations to decide how much should be allocated to provide home and community-based services.

People who need help with tasks like feeding themselves, getting dressed or taking medication must often qualify for a Medicaid waiver to get home care. Medicaid, a federal-state program that is the primary source of coverage for long-term care, spends about $114 billion a year on these home and community-based services, representing well over half of the overall spending on long-term care. About 2.5 million people received waivers in 2018, according to the latest data available in a report by the Kaiser Family Foundation.

Medicare, the federal insurance program for older and disabled adults, does not cover long-term care and it limits the kind of home care people can receive.

It’s well known that demand far outstrips supply for home care for those who want to live independently. Some people may have private insurance or pay for the care themselves.

Under Medicaid, the waiting lists for older and disabled Americans wanting home care keep growing because states cap enrollment. Most people on the lists live in states that did not expand Medicaid, according to a Kaiser analysis.

Benefits for home care also vary widely from state to state. For example, someone in Pennsylvania is eligible for about $50,000 a year under Medicaid for home or community services, while someone in Iowa may get only $21,000.

The lack of funding “really forces older adults into institutions,” said Amber Christ, an attorney with Justice in Aging, a nonprofit group. The new congressional package, she said, means that “we have an opportunity to flip the script.”

She and other advocates plan to push for additional money. “We’re going to keep working to increase funding because more is needed to ensure all aging adults and people with disabilities have the option to receive the care they need at home,” she said in an email.

Increasing wages for home health workers has been a contentious provision for Republicans, who see it as a giveaway to unions and would limit states’ flexibility in spending new funds.

Without detailed legislative language, calculating how the proposed $150 billion in the Democrats’ proposal will be spent is still guesswork.

Jonathan Gruber, a health economist at M.I.T., said the lower figure would provide home services for perhaps one million more people and create about 400,000 new jobs. That could include jobs for caretakers like family members who are unpaid but unable to go to work.

But if the amount gets cut further — and negotiations on the bill are far from over — supporters warn that states may be less willing to expand services.

“We need a big investment,” said Nicole T. Jorwic, senior director of public policy at The Arc, an advocacy group for people with physical and developmental disabilities. The bill has to provide at least $150 billion so “states will see the value and worth of taking it up,” she said.

Even that level of funding might not eliminate the waiting lists, but “it will help take people off,” she said.

Under the American Rescue Plan Act passed by Congress this year, all states made use of temporary funds allocated to shore up home and community-based services, Ms. Jorwic said.

Still, the issue of wages in a pandemic economy where people are shunning lower-rung jobs bodes ill for the home health industry, whose workers have long been paid far less than others in service industries. Some businesses now pay $15 an hour or more, luring away those in underpaying jobs and leaving the vulnerable without reliable help.

About 70 percent of long-term care workers earn less than $30,000 a year, according to Kaiser, and they are more likely to live in poverty. “It’s the same person who is aging into poverty and who is going to get pushed into a nursing home,” said Ms. Christ of Justice in Aging.

While details are sparse, the proposed legislation would require states to prove that the funds were funneled toward higher wages. “This would be the first time that there was a large federal investment to increase wages,” Ms. Jorwic said.

Higher wages are critical to finding more aides for those like Ms. Shaheed in Florida. “They’re no longer able to find anyone willing to come in for the low wages they are paying,” she said. “Nobody is going to come and help me for $10 an hour.”

For those who have had to wait to qualify for financial aid for home care, the difference is palpable.

People like Stephen Grammer, who has cerebral palsy, were warned since childhood that they faced institutionalization if home care could not be routinely provided.

In his 20s, Mr. Grammer spent nearly a decade in a nursing home after his mother became ill. He chafed at the restrictions imposed on him while he was living with older adults with Alzheimer’s. If he left the premises, he had to be back by midnight or it would count against the 18 nights a year he was allowed to be outside.

“When I had to use the restroom, I would press the call button, and many times the workers would come and turn off my call light and would walk away even though I had to go to the bathroom,” he said by email.

Mr. Grammer, who uses an electric wheelchair and advocates for disabled individuals these days, eventually qualified for a Medicaid waiver and another state program that provides housing. Now at 41, he lives on his own in Roanoke, Va., and someone comes in 16 hours a day from 6 a.m. to 2 p.m. and from 4 p.m. to midnight.

“I have the freedom to come and go as I please,” Mr. Grammer said.

City of Penticton, B.C. asking residents to fill out survey on public transit

BC Transit and the City of Penticton, B.C., are asking for feedback from residents on how to restructure the city’s public transit system. It’s been...
Read more