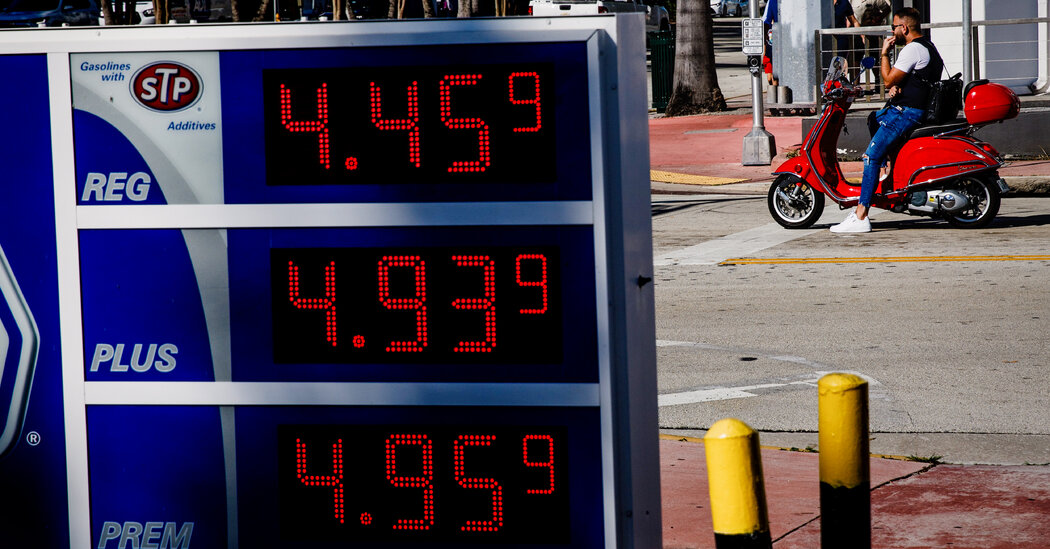 Global stocks dipped on Monday as U.S. officials discussed an oil cutoff, and gas prices hit a national average above $4, up more than 10 percent in a week.

WASHINGTON — President Biden came under pressure on Monday to ban Russian oil imports into the United States, forcing the administration to consider action that could further punish President Vladimir V. Putin of Russia but exacerbate high gas prices that are hurting consumers at home.

On Monday, a bipartisan group of American lawmakers agreed to move ahead with legislation that would ban Russian energy imports in the United States and suspend normal trade relations with Russia and Belarus. Some European countries, which are highly dependent on Russian energy, have expressed a willingness to reduce their reliance on those imports.

Jen Psaki, the White House press secretary, said that “no decision has been made at this point by the president about a ban on importing oil from Russia,” adding that discussions were “ongoing internally” and with European allies.

“I would note what the president is most focused on is ensuring we are continuing to take steps to deliver punishing economic consequences while taking all actions necessary to limit the impact of prices at the gas pump,” she said.

Global stocks slid on Monday amid worries of an oil ban and escalating Russian attacks on Ukraine. It was Wall Street’s worst day in more than a year.

The S&P 500 fell 3 percent, its sharpest daily decline since October 2020. The Nasdaq composite dropped 3.6 percent and is now 20 percent off its November record, entering territory known on Wall Street as a bear market, denoting a serious downturn.

The Biden administration, along with its global allies, has already imposed sweeping financial, trade and technology sanctions on Russia, but Western countries have deliberately carved out its energy sector, with top U.S. officials saying it would be unwise to disrupt global supplies given how heavily Europe relies on Russian oil and gas. Some officials also view the move as potentially enriching Mr. Putin by driving up gas prices. The average price in the United States reached a national average of $4.07 per gallon on Monday, up more than 10 percent from a week ago.

At his State of the Union speech last week, Mr. Biden talked about the economy’s strength but noted that high gas prices, along with rapid inflation, are hurting consumers. Those dynamics pose a political problem for the president, whose approval rating has suffered amid voter concerns about his handling of the economy.

Mr. Biden spoke with the leaders of Britain, France and Germany by video on Monday, and the four “affirmed their determination to continue raising the costs on Russia for its unprovoked and unjustified invasion of Ukraine,” according to a White House statement.

But that cross-border cooperation could stop with oil. Chancellor Olaf Scholz of Germany said his country could not simply turn off the spigot.

“Europe has deliberately exempted energy supplies from Russia from sanctions,” he said in a statement on Monday. “At the moment, Europe’s supply of energy for heat generation, mobility, power supply and industry cannot be secured in any other way.”

Biden administration officials say the immediate discussions over Russian energy are focused on banning domestic oil imports rather than carrying out wider sanctions that would cut off purchases by other countries. That could lessen the economic shock to oil markets given the United States does not import much Russian crude.

Last fall, it imported about 700,000 barrels per day from Russia, less than 10 percent of its total oil imports, U.S. officials said. By contrast, Europe imported 4.5 million barrels per day from Russia, about one-third of its total imports. The United States can easily find a way to make up for any loss of Russian oil, while Europe would have a harder time doing so, analysts said.

But any disruption in the flow of oil could further rattle global markets, including oil prices, which have surged because of the uncertainty over Mr. Putin’s invasion of Ukraine. Brent crude, the global benchmark, ended Monday up about 4.3 percent to $123.21 a barrel, but earlier it had climbed as high as $139 a barrel. The price of oil has soared about 26 percent over the past week as the conflict has intensified.

In a sign of how concerned the administration is about the uncertainties around global energy flow, American officials have been discussing the possibility of increasing supply or distribution with oil-producing nations, including Saudi Arabia and Venezuela, which is a partner of Russia and has been subject to broad U.S. sanctions for years.

President Nicolás Maduro of Venezuela said on Monday at a meeting with his council of vice presidents and military command that Venezuela had the capacity to produce more than three million barrels of crude oil per day “if necessary for the stability of the world.”

Mr. Biden, in a speech more than one week before Mr. Putin’s invasion of Ukraine, said that a conflict involving Russia could affect American consumers. “I will not pretend this will be painless,” he said on Feb. 15. “There could be impact on our energy prices, so we are taking active steps to alleviate the pressure on our own energy markets and offset rising prices.”

It is unclear how much pain an import ban would actually inflict on Russia. Moscow could try to make up for import bans by arranging to sell more oil to other customers, including China.

China is Russia’s most powerful strategic partner, and it has supported Moscow’s grievances against the United States and NATO during the war in Ukraine. On Monday, the Chinese foreign minister, Wang Yi, said at a news conference in Beijing that “no matter how perilous the international landscape, we will maintain our strategic focus and promote the development of a comprehensive China-Russia partnership in the new era.”

Yet China would have leverage to bargain down the purchase price, so Russia might still face a shortfall in revenue.

Alexander Gabuev, a senior fellow at the Carnegie Moscow Center, said the impact of any import bans or energy sanctions on Russia — and perhaps on Mr. Putin’s policies — “depends on how broad it is.” He added that a wide cutoff of sales “will have a significant impact because that will diminish Russia’s hard currency earnings.”

A third round of talks. Ukrainian and Russian delegations met for another negotiating session and agreed to try again to open humanitarian corridors for civilians leaving Ukrainian cities under attack, but made no progress on ending the war.

The key cities. Russian artillery struck residential areas in Mykolaiv but Ukrainian forces said they maintained control after another day of fierce fighting. In Kyiv, a Ukrainian commander claimed that two Russian planes were shot down. Here’s where the fighting stands in other cities.

“It’ll be reflected not only in the cash flow of the state budget, but also in the exchange rate.” Mr. Gabuev said. “You won’t have the hard cash to support the ruble.”

If the United States eventually imposes sanctions that keep Russia from selling its oil, Washington would need to ensure there is a robust global supply of oil. Some analysts ask whether the Biden administration would lift energy sanctions on Iran if the United States, Iran and other nations reached agreement on a new deal to restrict Tehran’s nuclear program. But U.S. officials say there would be no lifting of the sanctions.

“The economic impact depends on how much oil is being taken off the market and on what terms,” said Rachel Ziemba, an adjunct senior fellow at the Center for a New American Security.

Economists have been trying to assess the implications. Goldman Sachs analysts estimate that if oil prices reach $150 per barrel, it would shave off half of a percentage point from economic growth in the United States this year, as higher gas prices eat into consumer spending. They warn that the prospect of more inflation when prices are already rising at the fastest pace in 40 years could increase the odds that workers will demand higher wages, leading to a so-called wage-price spiral.

Economists at Capital Economics wrote in a report on Monday that a wide ban on Russian energy could cause Russia’s economy to contract by as much as 25 percent, but the global fallout would be significant. The pace of inflation in advanced economies could double, and the eurozone could fall into recession.

“As Russia is a large supplier of energy to European industry, a collapse in Russian energy trade would precipitate power rationing in parts of Europe, which in turn would rupture supply chains and could stoke additional inflationary pressure globally,” Caroline Bain, chief commodities economist at Capital Economics, said.

GasBuddy, which tracks gasoline prices, predicts that gasoline prices in the United States could soon hit an average of $4.50 a gallon, with prices reaching as high as $6 in California.

“There are few words to describe the unprecedented rise in gasoline prices over the last week, with massive spikes coast to coast in both gasoline and diesel prices, as oil prices jump to their highest since 2008,” said Patrick De Haan, GasBuddy’s head of petroleum analysis. “As we lose a major global producer under the weight of deserving bipartisan sanctions for invading a sovereign country, the cost is high.”

Republicans and Democrats have worked in lock step to ratchet up pressure on the White House to prohibit the importation of Russian energy products. Speaker Nancy Pelosi, Democrat of California, has repeatedly endorsed the move, telling reporters last week: “I’m all for that. Ban it.”

Some Democrats have privately expressed concern that Republicans may use any hike in gas prices as a political cudgel against them ahead of the midterm elections. But most have concluded that a ban on Russian oil is an important step.