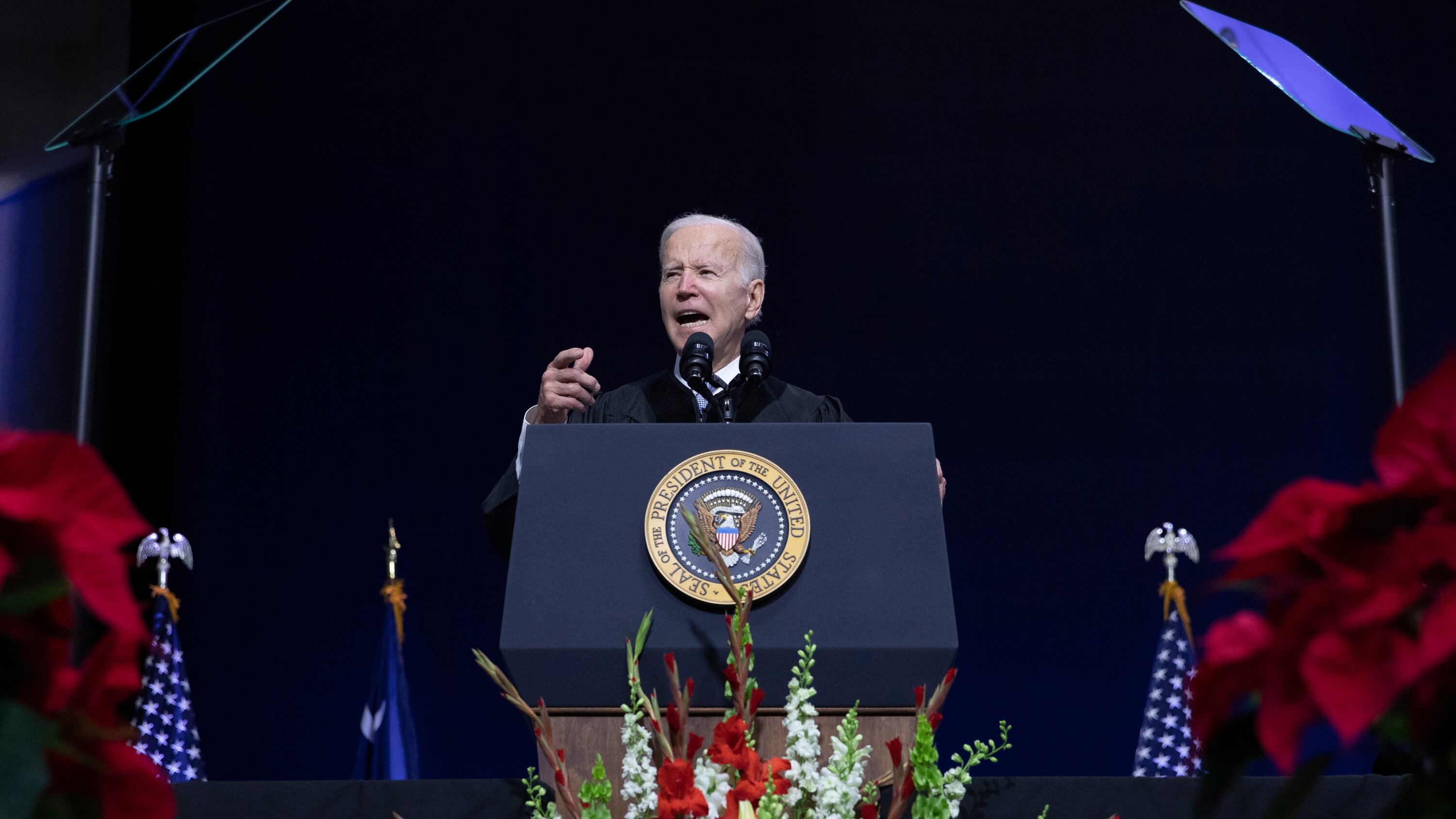 The president spoke amid his struggle to pass a bill that would give $10 billion to colleges and universities that historically serve Black, tribal and other minority students.

ORANGEBURG, S.C. — President Biden saluted a class of graduates at South Carolina State University on Friday and presented a diploma to one of the school’s most prominent alumni, Representative James E. Clyburn, whose endorsement helped save Mr. Biden’s presidential bid in 2020.

But his appearance at a historically Black university was largely an ode to the Black voters who have nurtured his political career, a denunciation of racism and a vow to pass a wide range of legislation to help Black communities — legislation that has largely stalled near the end of Mr. Biden’s first year in office.

Chief among those bills is an effort to expand voting rights, like a bill recently blocked by Senate Republicans that would have restored parts of the landmark Voting Rights Act, in the face of efforts by Republican-led states around the country to restrict access to voting. Democrats have pressed for Senate action on that legislation by year’s end, but have yet to find agreement on any plan that could bypass a Republican filibuster.

Mr. Biden promised to find a path forward for the effort, though he did not detail how. “We have to protect that sacred right to vote, for God’s sake,” he said.

He added, “We’re going to keep up the fight until we get it done.”

Mr. Biden used the speech to champion provisions in one of the biggest victories of his presidency, an infrastructure bill he signed into law this fall, including money to replace lead water pipes that poison Black children, to create jobs for Black engineers and to bring high-speed internet to every community in the country.

He also acknowledged that he had not delivered on other promises he made to Black voters, who were a pillar of his victories in the Democratic primaries and the general election.

He told the more than 75 graduates and their families that “the fight’s not over!” on legislation to overhaul policing in the United States. Bipartisan negotiations on a policing bill, led in part by Senator Tim Scott, Republican of South Carolina, collapsed in September with both parties declaring that their differences were too wide to bridge.

Mr. Biden vowed to pass a sprawling $2.2 trillion collection of spending programs and tax cuts that he is struggling to push through the Senate. The spending bill, known as the Build Back Better Act and focused on climate change and a variety of social programs, carries what would be a $10 billion infusion for colleges and institutions that historically serve Black, tribal and other minority communities. Leaders of historically Black colleges and universities urged congressional leaders to approve that spending in a letter last month, calling it “a significant down payment on investment in an American future full of talented citizens who are not inhibited by where they come from or what they look like.”

Mr. Biden has already pared back his initial ambitions to invest in those schools and other higher education students and institutions, in order to help whittle down the cost of the bill to appease centrist Democrats like Senator Joe Manchin III of West Virginia. The slimmed-down package met further setbacks this week, as Mr. Biden was unable to secure Mr. Manchin’s support after a pair of phone calls to discuss the senator’s concerns with its spending levels and potential to stoke higher inflation.

Still, Mr. Biden told the graduates that his administration — which includes the first vice president who is a graduate of a historically Black college, Kamala Harris — had already invested billions of dollars in historically Black colleges and universities and would deliver billions more. “I’m committed to doing everything I can to make real the promise of America for all Americans, for all of you,” he said.

The crowds that greeted Mr. Biden’s motorcade from Columbia, S.C., to the South Carolina State campus included pockets of protesters and supporters of former President Donald J. Trump, who won South Carolina in 2020 while losing the election to Mr. Biden. Inside the small arena that housed the commencement, where the vast majority of graduates and attendees were Black, Mr. Biden found a friendlier audience. “Go Joe!” someone shouted as he took the stage.

The appearance of a sitting president at a fall commencement ceremony was entirely the work of Mr. Clyburn, who graduated from South Carolina State in 1961 but did not walk across a stage to receive his diploma. He had been invited by the school to do so this year, to celebrate the 60th anniversary of earning his diploma, and to deliver the keynote address. But Mr. Clyburn had a better idea, he told the graduates.

He called Cedric Richmond, the director of Mr. Biden’s Office of Public Engagement, to tell him he would be marching with the graduating class to receive his diploma — and he wanted help securing the speaker.

“I told him,” Mr. Clyburn said, “I think it would be great to get my degree from the president of the United States, Joe Biden.”

Mr. Clyburn urged graduates to thank their parents and other supporters of their college journeys. He also preached resilience, telling how he had lost three bids for Congress before he finally won his seat.

Mr. Biden painted a similar picture, telling the crowd how he had been “shellacked” in the first two contests in the 2020 campaign and was struggling in the third, South Carolina, before Mr. Clyburn offered his endorsement.

He told graduates that he owed his first Senate victory to students from the historically Black Delaware State University, who organized for him.

“You’re inheriting an incredible tradition,” he said, “graduating from this university.”