Biden Insists He Can Do More With Less on the Economy 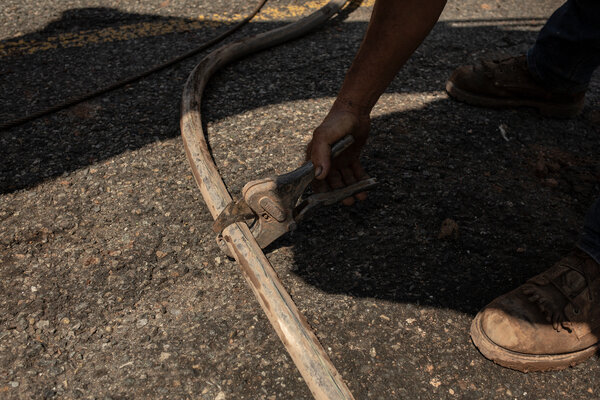 The president’s aides say they have found ways to replace lead pipes, wire homes for broadband and build charging hubs for electric cars, for less money than initially proposed.

President Biden and his team have entered a “do more with less” phase of his economic agenda, dictated by the political realities of a closely divided Congress.

The American Jobs Plan that Mr. Biden unveiled in March included $330 billion in new spending that the administration promised would replace every lead drinking pipe in America, connect every home to high-speed internet and build 500,000 charging stations for electric cars and trucks.

The compromise agreement that Mr. Biden struck with centrist senators last month would still accomplish all of those goals, White House officials insist — even though it spends only about 40 percent of what Mr. Biden initially proposed for broadband, electric vehicles and water infrastructure.

Biden aides say they have found creative ways to stretch federal dollars, often by leveraging private investment, in order to maintain the president’s top goals for his economic program. But they have had to scrap other targets as a result, and Mr. Biden is now barreling toward another round of potentially difficult compromises, this time forced by moderates in his own party, over the second half of his agenda, known as the American Families Plan.

In a speech on Wednesday, Mr. Biden gave no hint that he was scaling back his ambitions.

“It’s time that we have to think bigger and we have to act bolder,” Mr. Biden said at a community college in suburban Chicago, his latest stop in a tour to rally support for his agenda.

Using sweeping rhetoric, the president compared his ambitions to those of former President Ronald Reagan, who presided over an economic boom during his eight-year tenure.

In 1984, “Ronald Reagan was telling us it was an American morning,” Mr. Biden said, referring to Mr. Reagan’s re-election campaign ad that bragged that it was “morning in America” because of his policies.

“This is going to be an American century,” Mr. Biden said.

But first, there will have to be compromise. The negotiations ahead will pose a challenge to the expansive vision Mr. Biden laid out to overhaul the American economy, with new and costly government interventions to lift advanced industries and train and support the workers of the future. His objective in the weeks to come will be to pack as much of that agenda as possible into a pair of bills that are unlikely to spend as much as he wants, with his economic legacy hanging on the choices he and congressional leaders make.

Administration officials say Mr. Biden will continue to prioritize large and unifying national goals, including the extension of an enlarged tax credit for parents, the creation of America’s first federally funded paid leave program for workers and a government guarantee of four additional years of public education via preschool and community college.

“The president is fully committed to delivering on the full ambition of the jobs plan and the families plan,” Brian Deese, the director of the White House National Economic Council, said in an interview, in which he called the bipartisan infrastructure deal a “historic investment.”

In order to reach a $579 billion consensus framework with a group of senators that included five Republicans, Mr. Biden agreed to drop entire planks of the first half of his agenda, the jobs plan, including housing and home health care. He also lost about a third of his proposed spending in areas like roads, bridges and broadband.

Some of those dropped items could resurface in a second economic package that Mr. Biden is negotiating: a plan to bundle as much as possible of the remainder of the president’s $4 trillion agenda into a bill passed entirely with Democratic votes. Along with housing and health care, that bill could include Mr. Biden’s proposals for child care, education and poverty, along with some additional efforts to reduce the emissions that cause climate change.

But not all of the trimmed money will end up in that bill.

Mr. Biden has promised Senate negotiators he will not push for additional spending in the partisan bill in specific areas like broadband and water pipes that were addressed in the bipartisan deal. Centrist Democrats in the Senate, including Joe Manchin III of West Virginia and Jon Tester of Montana, are likely to agree to only some of Mr. Biden’s proposed spending programs in the partisan bill, in large part because they oppose parts of Mr. Biden’s plans to tax corporations and high earners in order to offset the cost of new spending.

Mr. Biden has repeatedly said he had to make difficult choices on physical infrastructure and settle for a deal that falls well short of his ambitions. But he has also cast the bipartisan deal as the nation’s largest increase in infrastructure spending since President Dwight D. Eisenhower created the interstate highway system, claiming that it would create “millions” of new jobs — without providing any White House estimates to back that up — and that it would achieve many of the same goals as his far more expensive original plan.

In some cases, Mr. Biden has narrowed his ambitions to focus on the highest priorities of his agenda — like removing lead pipes that poison children and stunt their academic development. Administration officials say the bipartisan deal will allow them to work through far less of the nation’s road maintenance backlog than Mr. Biden’s plan would have. The administration also agreed to reduce funding for an effort to help communities of color that were disrupted by past infrastructure efforts, like Black neighborhoods in New Orleans and Syracuse, from $20 billion in Mr. Biden’s plan to $1 billion in the bipartisan bill.

In other areas, the White House overhauled its entire funding approach to try to keep its goals.

The American Jobs Plan would have spent $174 billion to help the United States support a rapid acceleration in electric vehicle production and usage, including the 500,000 charging stations that have been a favorite Biden talking point going back to the presidential campaign.

The bipartisan agreement contains less than one-tenth as much spending on electric vehicles, which many Republicans say do not fit the traditional definition of infrastructure. White House officials say there is $7.5 billion in the agreement for federal grants to build charging stations across the country, and another $7.5 billion in a new financing tool that will generate loans and public-private partnerships to support charging stations.

“We can’t afford to water the policies down any further,” they added.

The compromise plan similarly reduces the broadband funding Mr. Biden proposed, to $65 billion from $100 billion. Aides say that will still be enough money to wire every home in the country for high-speed internet, citing estimates from the Federal Communications Commission and the Federal Reserve Bank of Richmond, though they concede the effort could take longer than anticipated in Mr. Biden’s original plan.

Some outside experts say the money will not be enough to reach the most difficult-to-wire homes in the country. “It will not bridge the digital divide alone,” said Adie Tomer, a fellow at the Brookings Metropolitan Policy Program who leads the Metropolitan Infrastructure Initiative.

It could be more difficult for Mr. Biden to wring efficiencies out of his families plan, which includes $1.8 trillion in spending and tax cuts focused on what administration officials call “human infrastructure.” The plan includes federal funding for workers to take paid leave to care for themselves or a family member, universal prekindergarten for 3- and 4-year-olds, two free years of community college and the extension of an expanded tax credit for parents that is meant to fight child poverty.

If Mr. Biden is forced to trim that spending to appease Democratic centrists, he will face difficult choices. He could eliminate certain efforts entirely, or reduce their reach — for example, by guaranteeing free prekindergarten only to children of low- and middle-income families.

He could also take a time-honored route in Washington when it comes to the tax credits in his plan, including the child poverty effort: Mr. Biden’s legislation could create or extend those credits for only a year or two, then count on a future Congress to make them permanent.

How to Start a Business— An Entrepreneur’s Startup Guide

Aspiring entrepreneurs may need help to develop great business ideas, especially when it seems everyone has already taken all the good ones. Still, it’s...
Read more