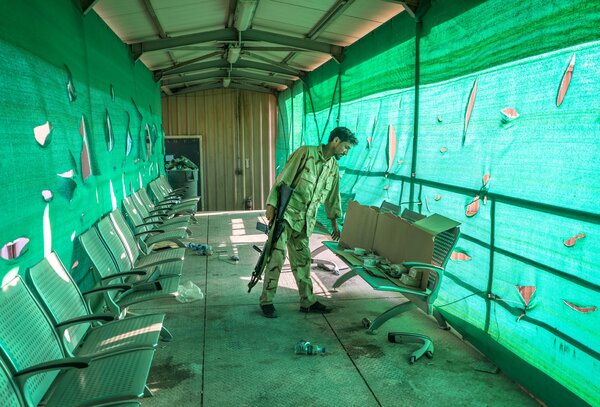 The president insisted that the United States had done more than enough to empower the Afghan police and military to secure the future of their people.

WASHINGTON — President Biden vigorously defended his decision to end America’s 20-year war in Afghanistan on Thursday, asserting that the United States can no longer afford the human cost or strategic distraction of a conflict that he said had strayed far from its initial mission.

Speaking after the withdrawal of nearly all U.S. combat forces and as the Taliban surge across the country, Mr. Biden, often in blunt and defensive tones, spoke directly to critics of his order to bring an end to American participation in a conflict born from the terrorist attacks of Sept. 11, 2001. He said the United States would formally end its military mission at the end of August.

“Let me ask those who want us to stay: How many more?” Mr. Biden said in remarks in the East Room of the White House. “How many thousands more American daughters and sons are you willing to risk? And how long would you have them stay?”

Mr. Biden said he was not declaring “mission accomplished,” but he made clear that the future of the country — including the fate of the current government and concerns about the rights of women and girls — was no longer in the hands of the American military.

Responding to questions from reporters about his decision to bring the war to a close, Mr. Biden grew testy as he rejected the likelihood that Americans would have to flee from Kabul as they did from Saigon in 1975. He insisted that the United States had done more than enough to empower the Afghan police and military to secure the future of their people.

But he conceded that their success would depend on whether they had the political will and the military might.

Pressed on whether the broader objectives of the two-decade effort had failed, Mr. Biden said, “The mission hasn’t failed — yet.”

The president also insisted that the United States had not abandoned the thousands of Afghans who served as translators or provided other assistance to the American military. Responding to critics who argue his administration is not moving quickly enough to protect them, Mr. Biden said evacuations were underway and promised those Afghans that there was “a home for you in the United States, if you so choose. We will stand with you, just as you stood with us.”

John F. Kirby, a Pentagon spokesman, said the military was looking at relocating Afghan interpreters and their families to U.S. territories, American military installations outside the United States, and in other countries outside of Afghanistan.

The war began two decades ago, the president argued, not to rebuild a distant nation but to prevent terror attacks like the one on Sept. 11, 2001 and to bring Osama bin Laden to justice. In essence, Mr. Biden said the longest war in United States history should have ended a decade ago, when Bin Laden was killed.

“We did not go to Afghanistan to nation-build,” he said. “And it’s the right and the responsibility of Afghan people alone to decide their future and how they want to run their country.”

Mr. Biden delivered his remarks even as the democratic government in Kabul teeters under a Taliban siege that has displaced tens of thousands of Afghan civilians and allowed the insurgent group to capture much of the country.

The rapid American withdrawal, he said, was a matter of safety.

“Our military commanders advised me that once I made the decision to end the war, we needed to move swiftly to conduct the main elements of the drawdown,” Mr. Biden said. “And in this context, speed is safety.”

In an effort to provide limited reassurance to the Afghan government, he said the American mission to help defend the country would continue through Aug. 31, though most combat troops have already left, leaving a force of under 1,000 to defend the American embassy and the country’s airport.

At another time in the country’s history, Mr. Biden’s speech, and the final withdrawal of troops from Afghanistan, might have roiled politics in the United States.

But at a moment when Americans are still fighting Covid, searching for a way out of 18 months of economic disruption, and struggling with racial tension and political division, there is almost no debate about the wisdom of the drawdown among Democrats and Republicans in Congress. Polls show that large numbers of Americans in both parties support leaving Afghanistan.

For years, Mr. Biden, in wanting to withdraw from Afghanistan, was on the losing side of the debate. In 2009, while serving as vice president, he argued for a minimal force, only to be overruled as President Barack Obama ordered a surge of forces, then a rapid drawdown. But a dozen years later, as president, he has found his moment.

Progressives who once warmed to the idea of educating Afghan girls and women are now more interested in rebuilding America than Afghanistan. Conservatives have largely given up on former President George W. Bush’s pledge to spread democracy around the world and instead embraced former President Donald J. Trump’s “America First” opposition to what he saw as endless wars.

In his remarks on Thursday, and in his answers to questions, Mr. Biden delivered a presidential version of “I told you so” about the war.

Now, he said, the experience of two decades of war reveals that “just one more year of fighting in Afghanistan is not a solution, but a recipe for being there indefinitely.”

America’s allies have accepted Mr. Biden’s decision. On Thursday, Prime Minister Boris Johnson of Britain announced the end of his country’s mission in Afghanistan, echoing Mr. Biden’s assessment that it was time for an end to the global military effort.

The president’s speech, which came just days after U.S. forces pulled out of Bagram Air Base, the operations center of the 20-year war, was the latest acknowledgment that the United States could not alter the country’s course.

But questions remain about whether his promise that the United States would retain an “over the horizon” capability to back up the Afghan forces amounts to a real security guarantee. Any operation would almost certainly need approval from Defense Secretary Lloyd J. Austin III or Mr. Biden himself.

“No nation has ever unified Afghanistan, no nation. Empires have gone there and not done it,” Mr. Biden said in a reference to the British occupation of the country in the 19th century and the Soviet effort to gain control three decades ago. Both efforts failed, and Mr. Biden was, in essence, adding the United States to the list.

In February 2020, the Trump administration announced an agreement with the Taliban that they advertised as a pathway to peace. But it hinged on a power-sharing agreement between the Taliban and the Afghan government that never materialized. And now, the situation on the ground is deteriorating so rapidly that the Taliban’s territorial gains grow by the day.

Tens of thousands of civilians have been displaced, provincial capitals are under siege and in some cases, Afghan troops have fled into neighboring Tajikistan. A third wave of the coronavirus has also pushed the country’s impoverished health care system to the brink.

Peace talks in Qatar between the Taliban and the Afghan government have all but stalled, despite occasional meetings between both sides.

The Afghan government is increasingly isolated. President Ashraf Ghani has shuffled his security cabinet with hopes that a new military strategy could help protect the country’s most important cities. Kabul, the country’s capital, is dealing with rolling power outages and growing lines at the passport office, highlighting the Taliban’s growing proximity.

In a nod to the ongoing instability, Mr. Biden said he intended for the United States to remain engaged in diplomatic efforts and to support the Afghan government with money and supplies even after all U.S. troops have left.

“We will continue to provide civilian and humanitarian assistance, including speaking out for the rights of women and girls,” he said. “I intend to maintain our diplomatic presence in Afghanistan.”

But since the United States officially began its withdrawal in May, Afghan troops have surrendered in the hundreds, forfeiting troves of U.S.-supplied equipment.

On Wednesday, Taliban forces entered a key city in the country’s northwest, freeing more than 100 prisoners there and nearly taking the capital of Badghis Province — Qala-e-Naw — until Afghan commandos and air support pushed the insurgents to its periphery.

The Taliban seem intent on pushing for an outright military victory. And no matter what the accord negotiated 17 months ago said about power sharing, the Taliban now present themselves as a comparable governing body as they seize territory and revive their hard-line Islamist rules.

Still, Mr. Biden said on Thursday that he did not believe a Taliban takeover of the government was inevitable and he bristled when a reporter asked if he trusted the Taliban.

“That’s a silly question,” he snapped. “Do I trust the Taliban? No. But I trust the capacity of the Afghan military, who is better trained, better equipped and more competent in terms of conducting war.”

Many other important issues remain unresolved. The administration is still working out plans to help maintain from afar the Afghan Air Force and the military’s Black Hawk helicopter fleet.

The Afghan Air Force, in particular, is heavily reliant on American and other foreign contractors for repairs, maintenance, fueling, training and other jobs necessary to keep it operating. About 200 of the original 18,000 Pentagon contractors remain in the country. Most contractors departed along with the American military, leaving a void that U.S. and Afghan leaders say could be crippling to Afghan forces as they face the Taliban alone.