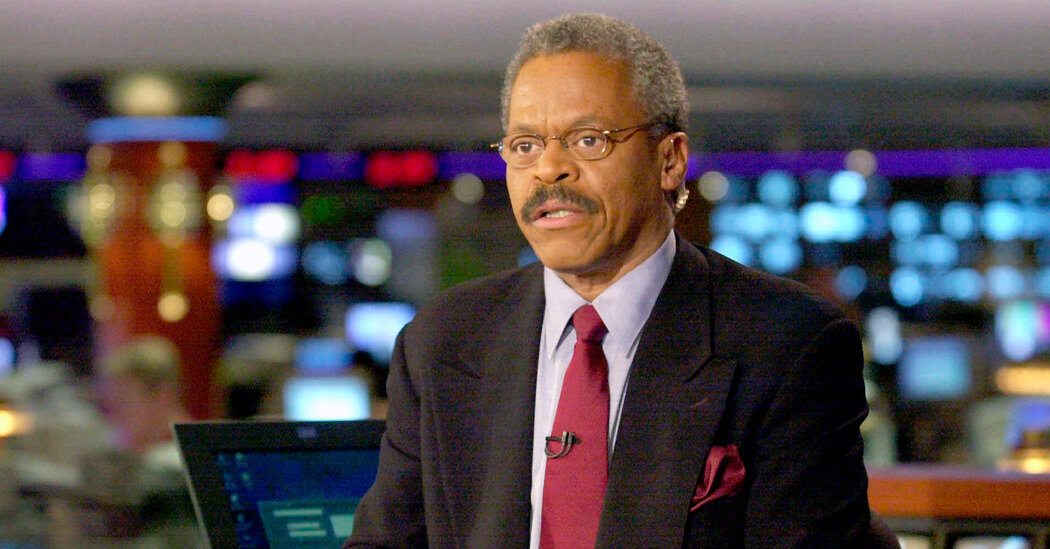 He covered the Gulf War, anchored convention coverage and asked a revealing question of Gov. Michael Dukakis during a presidential debate in 1988.

Bernard Shaw, CNN’s lead prime-time anchor for 20 years, who was also known for his steely coverage from Tiananmen Square in Beijing during the Chinese government’s crackdown on protesters in 1989 and from Baghdad at the start of the Persian Gulf war two years later, died on Wednesday. He was 82.

The death, at a Washington hospital, was confirmed in a statement by Chris Licht, CNN’s chairman and chief executive. The cause was pneumonia.

When the Gulf War began in January 1991, Mr. Shaw was watching from the balcony of his room at the Al-Rashid Hotel as airstrikes and antiaircraft fire filled the air in Iraq’s capital city.

“Whoa! The skies over Baghdad have been illuminated,” he said. “We’re seeing flashes going off all over the sky.” Sam Feist, CNN’s Washington bureau chief, said in a phone interview, “He was really the world’s eyes to history.”

Two years earlier, when he was anchoring CNN’s coverage from Tiananmen Square, he informed viewers that the Chinese government was about to cut off live transmission of the network’s coverage before signing off.

Known for his steadying influence at the anchor desk and from the field, Mr. Shaw had worked at CBS News and ABC News before he left the comfort of broadcast news to take a career gamble by joining Ted Turner’s fledgling Cable News Network in 1980.

He was one of the first Black anchors of a network evening news program, following Max Robinson, who became a co-anchor of ABC News’s “World News Tonight” in 1978.

Wolf Blitzer, a CNN anchor, recalled that Mr. Shaw, who worked with his reporting colleagues, Peter Arnett and John Holliman, remained in Baghdad for several days despite the danger of the assignment. “When he came back, I told him how nervous we were and that he was risking his life for all of us,” Mr. Blitzer said, “and he said, “It was a huge news story, so we stayed.’”

Lisa Napoli, the author of “Up All Night: Ted Turner, CNN, and the Birth of 24-Hour News” (2020), wrote in an email that when CNN started, “Shaw defined CNN to a tiny audience,” but “he showed the networks that the concept of an all-news channel was a force.”

One of Mr. Shaw’s most dramatic and controversial moments at CNN came when he moderated a presidential debate in 1988 between Gov. Michael Dukakis of Massachusetts and Vice President George H.W. Bush.

Mr. Shaw began the debate on the issue of capital punishment, asking a blunt hypothetical question involving Mr. Dukakis’s wife: “Governor, if Kitty Dukakis were raped and murdered, would you favor an irrevocable death penalty for the killer?”

“No, I don’t, Bernard,” Mr. Dukakis answered dispassionately, without referring to his wife, but focused on his position on the issue. “And I think you know that I’ve opposed the death penalty during all of my life.”

The question angered many Democrats as tasteless, Mrs. Dukakis herself called it “outrageous,” and some observers said the governor’s impassive response cost at him at the polls. But Mr. Shaw told The Washington Post soon afterward that he had posed it to Mr. Dukakis “as a stethoscope to find out what he was feeling on this issue.”

“Bush,” he said, “had been beating Dukakis severely about the head and shoulders, charging he was soft on crime.”

Bernard Shaw was born on May 22, 1940 in Chicago. His father, Edgar, was a railroad worker and house painter, and his mother, Camilla (Murphy) Shaw, was a housekeeper. Bernard had an early fascination with the news business: His father brought home four newspapers a day; he idolized the CBS News correspondent Edward R. Murrow; and as a teenager he found his way into the 1956 Democratic National Convention in Chicago.

“When I looked up at the anchor booths,” he told Time magazine, “I knew I was looking at the altar.”

In 1961, while he was serving a four-year stint in the Marines, he was stationed in Hawaii and learned that Walter Cronkite, the CBS News broadcaster, was working on a story in Honolulu. He left messages for Mr. Cronkite that led to a meeting in the hotel lobby.

After graduating from the University of Illinois, Chicago, with a bachelor’s degree in history in 1966, Mr. Shaw worked for local radio and television stations in Chicago until 1971, when CBS News hired him as a political reporter. His assignments included the Watergate scandal. He moved to ABC News in 1977 and became its Latin American correspondent, covering the mass murder and suicide of the Jonestown cult in Guyana.

At CNN, Mr. Shaw became one of the most prominent journalists hired to fulfill Mr. Turner’s daunting challenge: to quickly establish the credibility of a 24-hour start-up in a news business that was then known primarily for CBS, NBC and ABC’s half-hour evening news programs.

In a tribute to Mr. Shaw when he retired in 2001, Judy Woodruff, who anchored the “Inside Politics” program on CNN with him and is now a news anchor with PBS, said he had a “a manner and a voice that makes every word believable; the coolest demeanor in the hottest situations; the cut-to-the-quick interviewing style; and, at his core, a powerful combination of journalistic integrity and pure instinct.”

His judiciousness came into play in the aftermath of the attempted assassination of President Ronald Reagan in 1981, when CBS and ABC erroneously reported the death of James Brady, Mr. Reagan’s press secretary, who had been wounded in the shooting. Mr. Shaw refused to make a similar announcement because the information that CNN had received was secondhand. Mr. Brady survived the shooting (and died in 2014).

Mr. Shaw was in Beijing in 1989 covering the anti-government protests in Tiananmen Square when martial law was declared in parts of the city, leaving the CNN contingent 58 minutes before the network would be taken off the air.

“And at the final moment, before the plug was pulled, we were able, after much browbeating and negotiating back and forth with the Chinese, to give Bernie a chance to sign off and close this whole operation down,” Mike Chinoy, the Beijing bureau chief at the time, said in the retirement tribute to Mr. Shaw.

In signing off, Mr. Shaw told viewers: “In my 26 years in this business, I have never seen anything like this. For all of the hard working men and women of CNN, goodbye from Beijing.”

Until his retirement Mr. Shaw continued to anchor from Washington and from locations of major news stories, like Oklahoma City, where he spent two weeks in 1995 after the terrorist bombing of the Alfred P. Murrah Federal Building there that killed 168 people.

He is survived by his wife, Linda (Allston) Shaw; a daughter, Anil; and a son, Amar.

In 2014, when he was interviewed by NPR, Mr. Shaw said that in covering major stories he strove to control his emotions, as he did in Baghdad.

“People are depending on you for accuracy, dispassionate descriptions of what’s happening,” he said. “And it would be a disservice to the consumers of news — be they readers, listeners or viewers — for me to become emotional and to get carried away.”

Corey Conners and Taylor Pendrith made Canadian history twice at the Presidents Cup and, although they’re disappointed in the result, they’re ready for more. It...
Read more