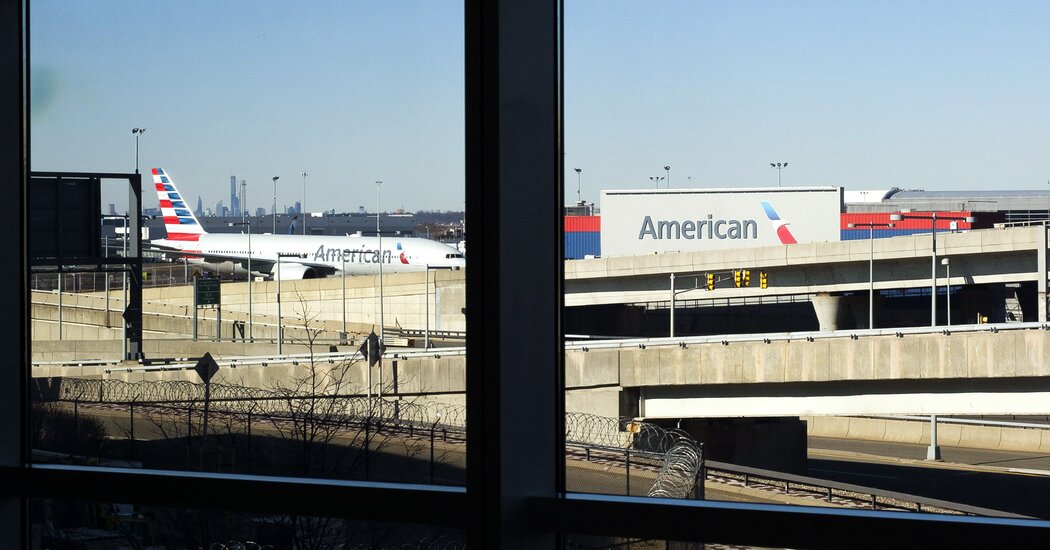 The chief executive of American Airlines called the violent encounter on a California-bound flight from New York last week “one of the worst displays of unruly behavior we’ve ever witnessed.”

An American Airlines flight attendant who was struck on her nose by a passenger last week sustained a concussion and had to be taken by stretcher from the plane after it was diverted to Denver, where the passenger was taken into custody, according to a criminal complaint filed in U.S. District Court in Colorado.

The passenger, Brian Hsu, 20, of Irvine, Calif., was charged with assault and interference with a flight crew, according to the criminal complaint.

The flight attendant was taken to a hospital after the flight, American Airlines Flight 976 from New York City to Santa Ana, Calif., was diverted to Denver International Airport on Wednesday.

Doctors found that the flight attendant had a concussion, according to the filing from an F.B.I. agent who investigated the case. She underwent a CT scan, but doctors were “unable to determine if her nose was fractured because of the swelling,” the filing said.

According to statements that passengers who witnessed the episode made to the F.B.I. agent, the flight attendant asked Mr. Hsu to stay away from the bathroom, and Mr. Hsu “punched her in the face with sufficient force to cause her to hit the lavatory door.” Another witness described the passenger “striking her with his fist in a way that appeared practiced or trained.”

After the flight attendant was struck, another flight attendant repeatedly asked Mr. Hsu to sit in his seat, according to the filing. Mr. Hsu did not initially comply but finally sat down, and then, one witness told the authorities, Mr. Hsu was restrained with tape and later “plastic bonds.”

Mr. Hsu told the authorities a different account. He said that he was returning to California from New York after having brain surgery in Rhode Island to “reconstruct portions of his skull” after he was assaulted in New York City in fall 2020 and sustained a skull injury, according to the filing.

Mr. Hsu said he got up from his seat on the plane to use the restroom and stretch. While he was stretching, Mr. Hsu said, he accidentally bumped the flight attendant, and she began swinging at him with her hands, the filing said. Mr. Hsu said that he “backed up towards his seat and raised his hands defensively” and that she “hit her nose against the palm of his right hand.”

Mr. Hsu told the authorities that he sometimes experiences a “mental ‘fog’” and that “he became scared because an impact to his head in its current state could cause him severe injury or death,” according to the complaint.

The flight attendant told the authorities that she had told Mr. Hsu he could not use the bathroom because the pilot had turned on the plane’s “fasten seatbelt” signs, and that he needed to return to his seat, according to the filing.

Mr. Hsu then “charged at her, flailing his arms,” the complaint said.

A federal public defender assigned to represent Mr. Hsu did not immediately respond to requests for comment on Monday night.

In a video message posted on Instagram, Doug Parker, the chief executive of American Airlines, called the encounter “one of the worst displays of unruly behavior we’ve ever witnessed.”

Mr. Hsu will never be allowed to fly again with American Airlines, Mr. Parker said in the video message, adding that such altercations are “happening far too often.”

“This type of behavior has to stop,” he said.

The episode is one of thousands that have occurred this year, according to the Federal Aviation Administration. Through Oct. 26, the F.A.A. had recorded more than 4,900 reports of unruly passengers this year, in addition to more than 3,500 face mask-related incident reports.

In a statement on Oct. 28, the Association of Professional Flight Attendants said that barring the passenger from future American Airlines flights “does not address the root problem,” and called for the F.A.A. and the Department of Transportation to implement a “no-fly” list to include all airlines.

In a statement in September, Steve Dickson, the F.A.A. administrator, said the number of incidents had dropped after the agency instituted a “zero-tolerance” policy toward unruly passengers; the policy opts for directly issuing fines instead of warning letters.

“Our work is having an impact and the trend is moving in the right direction,” Mr. Dickson said. “But we need the progress to continue. This remains a serious safety threat, and one incident is one too many.”