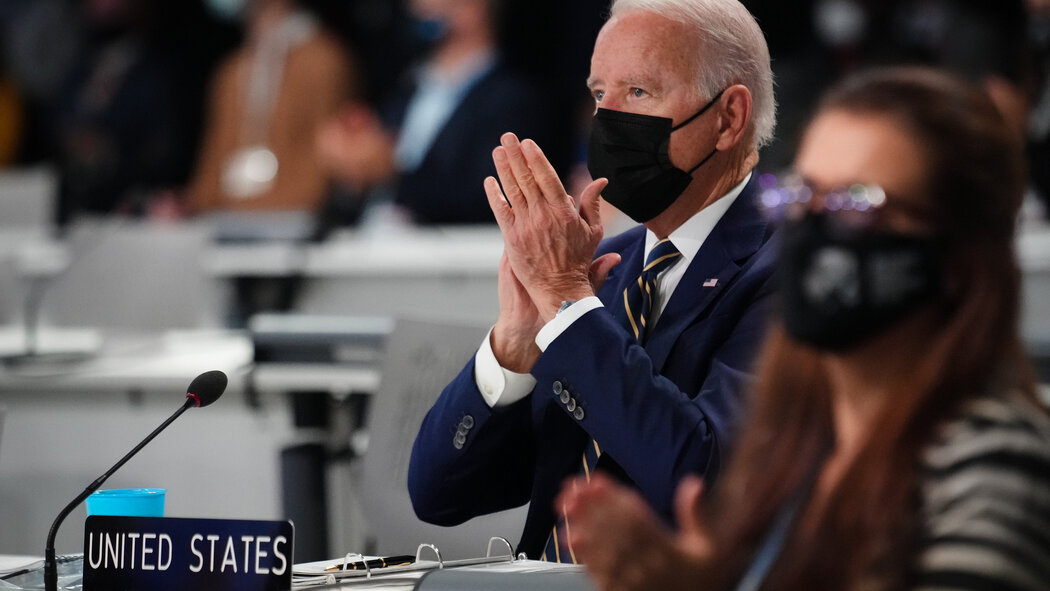 The opening day of a climate summit was heavy on dire warnings and light on substantive proposals as leaders in Glasgow met to discuss a warming world.

The gathering, called in the hope that the world could at last agree on meaningful steps to put a rapidly warming planet back on course, is scheduled to last nearly two weeks, but it took only hours for the first bumps to appear.

Long-running fault lines in the global debate over who should be the most responsible for cutting emissions emerged in the opening speeches of the assembled heads of state. So did barbs aimed at two major greenhouse gas emitters, China and Russia, whose leaders did not attend. And so did the tensions between the globe’s rich and poor, as less-developed countries demanded more aid and swifter action from wealthier ones.

For his part, President Biden apologized Monday for former President Donald J. Trump’s hostility toward the global warming fight, saying it had “put us sort of behind the eight ball.”

His administration, under pressure at home and abroad over its climate plans, was set to announce a series of new initiatives on Tuesday. The most significant: a plan to heavily regulate methane, a potent greenhouse gas that spews from oil and natural gas operations and can warm the atmosphere 80 times faster than carbon dioxide in the short term.

But it is clear that much more will need to be done.

Addressing leaders of the more than 120 countries represented at the summit on Monday, the United Nations secretary general, António Guterres, said the effects of a warming planet were being felt “from the ocean depths to the mountaintops.”

“Enough of burning and drilling and mining our way deeper,” Mr. Guterres said. “We are digging our own graves.”

Oceans are hotter than ever, parts of the Amazon rain forest emit more carbon than they absorb, and over the last decade about four billion people were affected by events related to the changing climate. In the past year alone, deadly floods hit Germany and China, heat waves killed nearly 200 people in the Pacific Northwest and so-called zombie wildfires raged in the Arctic.

Prime Minister Boris Johnson of Britain compared the race to stop global warming to a spy thriller, warning that “a red digital clock ticks down remorselessly to a detonation that will end human life as we know it.”

“We are in roughly the same position, my fellow global leaders, as James Bond today,” Mr. Johnson said. “The tragedy is this is not a movie, and the doomsday device is real.”

But for all the dire warnings Monday, there was little in the way of specific proposals about how to reduce emissions in the immediate future.

India, which has contributed relatively little to the world’s emissions thus far but looms as a growing source of them, announced new targets that will keep coal at the heart of its power sector for at least a decade. Prime Minister Narendra Modi said India would also increase its 2030 target for using renewable energy, such as solar power.

Mr. Biden urged countries to cooperate in the fight, emphasizing the potential creation of millions of jobs worldwide related to lower-emission technologies.

“We’re still falling short,” Mr. Biden said. “There is no more time to hang back or sit on the fence or argue amongst ourselves. This is a challenge of our collective lifetime.”

The underlying tension of the summit is the stark disconnect between what the leaders of the biggest global warmers have so far promised and what scientists and civic leaders say must be done.

There is also a disconnect between what has been promised and what has been actually delivered. Leaders of developing countries reminded the summit, for example, that poorer nations have yet to receive the $100 billion in annual climate aid by 2020 that was once pledged.

Several leaders, among them Sheikh Hasina, the prime minister of Bangladesh, and Gaston Browne, the prime minister of Antigua and Barbuda, pressed forcefully for a discussion of loss and damage. They are, in effect, demanding reparations of a sort for countries that bear little responsibility for the emissions warming the earth — but are already suffering the effects.

Late on Monday, leaders from more than 100 countries, including Brazil and China, did pledge to end deforestation by 2030, and a suite of measures is intended to channel that goal into action. Governments committed $12 billion and private companies $7 billion to protect and restore forests in a variety of ways, including $1.7 billion for Indigenous peoples.

But experts say the commitments countries have made to reduce emissions are nowhere close to what is necessary. And there remains a question about whether even those limited commitments can be met.

In the United States, Mr. Biden is struggling to deliver on his ambitious climate targets. He spent much of Monday talking up his “Build Back Better” climate and social policy proposals. But in fact his administration had already been forced to abandon the centerpiece policy of that bill — a measure that would incentivize the power sector to shift from fossil fuels to renewable energy — because of objections by Senator Joe Manchin III of coal-reliant West Virginia.

Mr. Biden scaled back his bill and proposed instead spending $550 billion in tax credits for renewable energy, electric vehicles and other efforts to fight climate change. That would have helped get the United States halfway to Mr. Biden’s goal of cutting emissions up to 52 percent from 2005 by the end of the decade.

Mr. Biden’s domestic struggles have not gone unnoticed by leaders and activists all over the world, especially in light of the U.S. history of abandoning global climate efforts, most notably the Paris accords, which the Obama administration signed, the Trump administration abandoned and the Biden administration rejoined.

“You know, the U.S. lost five years,” Mohamed Nasheed, the former president of the Maldives, said in an interview.

Mr. Biden addressed the issue directly at the summit.

“I guess I shouldn’t apologize,” he said, “but I do apologize for the fact the United States, in the last administration, pulled out of the Paris Accords and put us sort of behind the eight ball.”

Mr. Nasheed, whose low-lying island nation in the Indian Ocean is existentially threatened by climate change-driven sea level rise, said Mr. Biden had a higher bar to meet because of the Trump administration’s actions.

“They’ve come back again, but their ambition must be much higher,” Mr. Nasheed said. “The United States is the richest country on the planet. They of course have emitted more carbon than anyone else. And there’s a historical responsibility, therefore, to make it right.”

Activists from the United States, too, denounced Mr. Biden’s speech.

Varshini Prakash, executive director of the Sunrise Movement, a youth-led climate change nonprofit, called the president’s exhortation to other nations to cut emissions “humiliating” given his failure to pass climate legislation at home.

Mr. Biden tried to cast the United States as a leader, and his aides sought to turn international climate ire toward China. Briefing reporters on Air Force One, his national security adviser, Jake Sullivan, called the Chinese “significant outliers” and said Beijing had “an obligation to step up to greater ambition as we go forward.”

The absence at the summit of leaders from Russia and China cast doubts on how united the world can be in the struggle.

China, the world’s largest greenhouse gas emitter, proposed a new emissions target that is largely indistinguishable from one it made six years ago. Russia has not made any new pledges to draw down climate pollution this decade.

“I do hope they understand,” she said. “The president wants to pass it very soon, and I think he expects it.”