Asphalt Industry Is a Big Winner in Infrastructure Plan 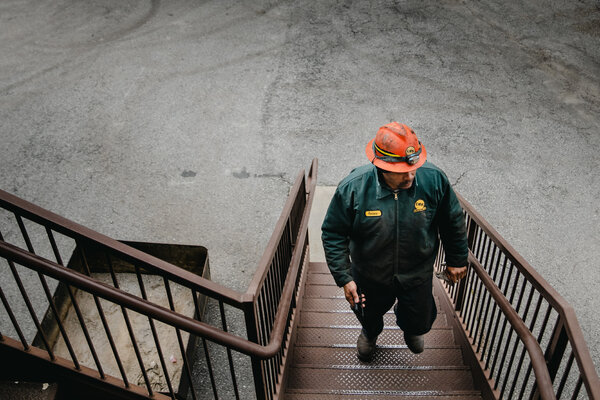 In the middle of the infrastructure bill negotiations last year, with the pandemic still limiting in-person meetings, the lobbyist Martin T. Whitmer Jr. found a creative way to get in front of lawmakers with a message from his client, the asphalt industry: He pulled a pair of collapsible lawn chairs out of his trunk and invited lawmakers to meet with him in a park near the Capitol.

“You just have to have the face to face on some stuff, and that really, really helped,” Mr. Whitmer said.

The strategy appears to have paid off. Within the $1 trillion of spending authorized by the infrastructure legislation that President Biden signed in November, the asphalt industry may ultimately receive the biggest share. And while roads were always likely to be a key focus of the legislation, the lobbying effort provided the industry a chance to promote what it cast as its environmental consciousness, making funding it more palatable to lawmakers who were concerned about road building fueling climate change.

The infrastructure package allocates at least $350 billion over five years to highways and bridges, according to the Eno Center for Transportation, a nonprofit transportation think tank in Washington, compared with about $91 billion for mass transit. An additional $19 billion to the Transportation Department to fund major projects, like underwater vehicular tunnels or bridge replacements, could augment the pavement spending.

The highway and bridge budget will pay for engineers, steel, concrete and other elements of the structures. But lobbyists and transportation experts expect an outsize portion of the pavement spending to go to asphalt, the material that paves 94 percent of America’s roads and bridges (the other 6 percent are paved with concrete).

The asphalt industry’s funding win appears to be the result of meat-and-potatoes legislative prioritizing that was helped by a politically prescient push by trade groups, according to lobbyists, congressional aides and other people involved in the process. Lawmakers realized that in a polarized political environment they could find common cause in repairing roads and bridges. Asphalt advocates, hoping to counter the idea that asphalt hurts the environment, framed the material as an unlikely ally in combating climate change.

“We are America’s No. 1 most recycled product,” said Jay Hansen, the executive vice president for advocacy at the National Asphalt Pavement Association, the industry’s main trade group. A 21-page letter the association sent to Mr. Biden’s transition team late in 2020 entitled “Build Back Better with Asphalt” suggested asphalt was also critical to job creation and economic recovery.

The first wave of financing under the infrastructure plan, which focused on a few areas like broadband, energy programs and water services, was provided shortly after the bill was signed. The next wave, which contains tens of billions of dollars for highways and bridges, is set to be released when Congress approves a 2022 spending package, potentially next month. That funding will be distributed to cities and states, which will combine it with their own funding from fuel taxes and other fees to pay for construction projects, including paving.

Controversies over how to spend the money are already stirring. A December memo from the Federal Highway Administration that prioritized improving existing roads ahead of constructing new ones — a proposal transportation industry executives viewed as an attempt to curb the environmental impact of new construction — brought protests from some state transportation officials, who said that the guidance undercut them.

In a letter to Transportation Secretary Pete Buttigieg on Friday, more than two dozen Republican senators — including Mitch McConnell of Kentucky, the minority leader, and Shelley Moore Capito of West Virginia, the senior Republican on the Environment and Public Works Committee — argued that the memo’s proposal was at odds with Congress’s intent in passing the bill. The senators asked Mr. Buttigieg to rescind or revise the memo to better reflect the spirit of the law.

At the same time, an effort by Senate Democrats to suspend the federal fuel tax to counteract rising consumer prices was met with immediate transportation industry opposition. An industry trade group said in a letter to Senate leaders that even a temporary curtailment of the taxes risked unraveling the infrastructure package.

Despite the continued political bickering, asphalt producers say they are excited about the prospect of five years of funding certainty, which will allow them to hire and expand.

“We have the capacity to do more work,” said Dan Garcia, president of the asphalt producer C.W. Matthews based in Marietta, Ga. “So from an equipment capacity, a plant capacity, it’ll be really good for us.”

Mr. Garcia’s company operates 27 asphalt plants across Georgia, crushing rocks mined from nearby quarries, combining them with sand and gravel into a mix known as “aggregate” and cooking them with asphalt, a viscous liquid derived from crude oil. The asphalt mix is then loaded onto 18-ton trucks that transport the mix to job sites.

With a funding increase of as much as 20 percent expected at the state transportation department in Georgia, which is C.W. Matthews’s biggest client, Mr. Garcia is now looking to add more than 100 employees to his 1,300-person team.

Pavement groups were urging the government to come up with more permanent funding for roads well before Mr. Biden was elected. The last significant funding package, the Fixing America’s Surface Transportation Act, or FAST Act, was signed by President Barack Obama in 2015. Mr. Trump’s administration presented a plan of its own, but a series of “infrastructure weeks” that led to little progress eventually became a running joke. By 2020, the pandemic had overtaken most other priorities.

The Infrastructure Bill at a Glance

The bill receives final approval. The House passed the $1 trillion bill on Nov. 5 to rebuild the country’s aging public works system. The proposal is a central plank of President Biden’s economic agenda, which he signed into law on Nov. 15. Here’s what’s inside the bill:

Transportation. The proposal would see tens of billions of dollars in new federal spending going to roads, bridges and transportation programs. Amtrak would see its biggest infusion of money since its inception, and funds would be allocated to programs intended to provide safe commutes for pedestrians.

Climate. Funding would be provided to better prepare the country to face global warming. The Forest Service would get billions of dollars to reduce the effects of wildfires. The bill includes $73 billion to modernize the nation’s electricity grid to allow it to carry renewable energy.

Resources for underserved communities. A new $2 billion grant program is expected to expand transportation projects in rural areas. The bill would also increase support for Native American communities, allotting $216 million to the Bureau of Indian Affairs for climate-resilience and adaptation efforts.

In December 2020, shortly after Mr. Biden’s victory, the National Asphalt Pavement Association sent its “Build Back Better with Asphalt” letter to the president-elect. The arguments about the need for new road and bridge funding were not new, but the positioning of asphalt as an eco-friendly material was.

Mr. Whitmer, who knew some of the transportation advisers on the presidential transition team, recalled being encouraged by the response. “They didn’t know about asphalt being the most recycled product,” he said the advisers told him in back-channel discussions.

Asphalt’s overall environmental impact, however, is less rosy. New roads intended to ease urban traffic jams simply bring more drivers, adding to carbon emissions. Recycling a wider variety of materials in asphalt, such as ground, used tires or soybean oil, and cooking asphalt components at a lower temperature to reduce emissions are promising practices but have yet to be widely adopted.

Mr. Garcia’s plants still produce the relatively warmer “hot mix” asphalt pavement, and tend to have between 20 and 40 percent recycled asphalt pavement in their new materials — more than the standard American road contains.

Asphalt itself is a polluting hydrocarbon. And a recent study by Yale University engineers suggested that asphalt pollutes air when exposed to bright sunlight. (The asphalt association questioned some of the Yale study’s conclusions, saying that “asphalt materials from in-service pavements are not meaningful sources of urban smog.”)

Last April, after Mr. Biden unveiled a jobs plan that prioritized rebuilding roads and bridges, transportation groups began coordinating more closely. The mentality, said Jeff Davis, a senior fellow at the Eno Center, was “a rising tide lifts all boats.” He added, “They were all agreeing that more money was going to help everybody.”

To give the lobbying push a more tangible quality, Vulcan Materials, the nation’s largest producer of aggregate for construction, brought Representative Carolyn Bourdeaux, Democrat of Georgia, to its Norcross quarry in that state, and Senator Bill Hagerty, Republican of Tennessee — who had put himself through college partly through a job shoveling asphalt — to tour its Nashville quarry.

In Washington, Mr. Whitmer pulled his chairs out of the trunk and began dialing members of Congress for coffee in the park. On video calls, Mr. Hansen showed two-inch squares of solid asphalt mix. “You use this every day, but you don’t realize it,” he would say.

Last April, when the White House and some lawmakers began defining infrastructure in broad terms, some industry executives and lobbyists worried about money that had historically gone to highways being shared with projects like federally subsidized housing. An industry suggestion to raise federal fuel taxes to help pay for new spending was rejected by Senate leaders. The entire process was bedeviled by the partisan polarization in Congress.

But the issue proved to be of sufficient importance to enough members of both parties that a bipartisan deal came together that provided substantial new money for needs like mass transit and better access to broadband as well as roads.

“Getting both sides together to agree on something is good. Wish we would see that more often,” Mr. Garcia said on a recent morning in Adairsville, Ga., over the sounds of truck equipment as his crew placed asphalt along Route 140. “It not only impacts us — these truck drivers, the quarry — but obviously this is progress, right?”