As One Alaskan Museum Closed, a Native Heritage Center Prospered 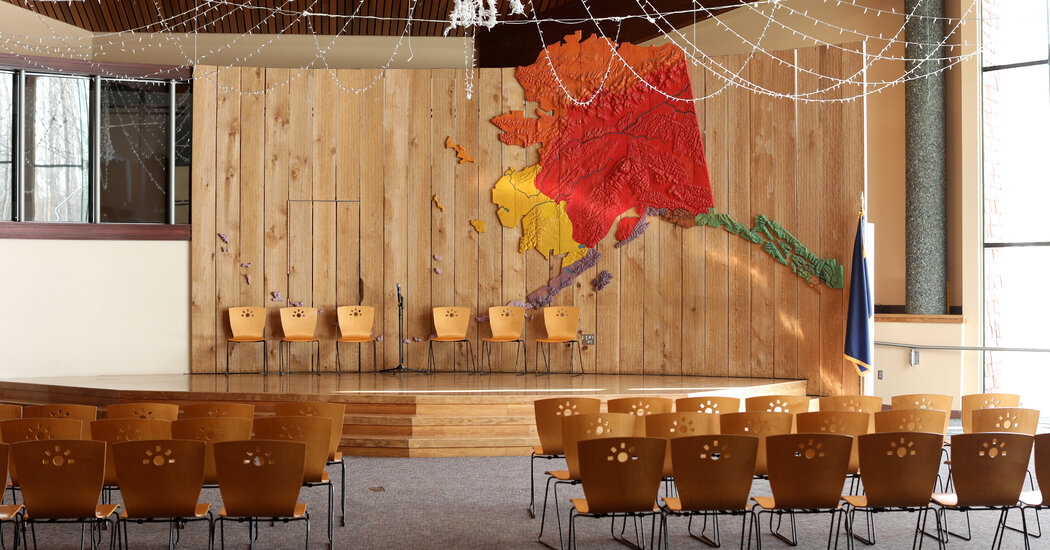 Wells Fargo closed its museum in Anchorage and has given much of its collection of Native artifacts to another institution that focuses on the state’s Indigenous cultures.

At the turn of the century, Edward Anton Rasmuson arrived on the Alaska frontier, a Swedish-born missionary there to teach Tlingit children at a time when many small villages did not have public schools.

Before he died in 1949, Rasmuson would rise to lead the territory’s biggest bank, the National Bank of Alaska, but would never lose his interest in Alaska Native culture.

He and his family collected some 6,000 artifacts, textiles and tools, most of which ended up in a museum created by the bank in downtown Anchorage in 1968.

But that museum, which was taken over by Wells Fargo when it acquired the National Bank of Alaska in 2000, closed its doors in 2020, a casualty of the coronavirus pandemic.

Now, much of this historical trove has been turned over to the Alaskan Native Heritage Center, a museum that focuses on Indigenous culture and is operated by Alaska Natives. The donation by Wells Fargo of more than 1,700 objects nearly doubled the center’s collection and enabled the museum, which opened in 1999 as the only statewide center dedicated to celebrating all Alaska Native cultures, to overhaul its programming.

“These items will help us share our cultures with people around the world, but they will also help us work directly with our community,” Emily Edenshaw, the heritage center’s president and chief executive, said in an interview.

Edenshaw joined the heritage center in 2019, motivated by her own experience being raised thousands of miles away from her Yup’ik and Iñupiaq heritage. Her mother was part of a 1956 forced adoption program and was raised in Texas, but Edenshaw returned to Alaska for college and eventually took the Yup’ik name Keneggnarkayaaggaq, meaning a person with a beautiful persona, spirit, aura and friend.

“For a long time, I carried shame about not knowing my own culture,” she said. “So much of my journey is grounded in reconnecting with who I am.”

The theme of reconnection has been core to the heritage center’s programming with workshops on Indigenous food, dancing and singing; there are also community initiatives, like one aimed at helping Alaska Native men who struggle with homelessness.

Now the museum will also be able to use many of the new objects to transform its exhibitions, which have not changed in two decades. Much of that work will fall to Angie Demma, a curator from the Wells Fargo museum, who has now come to work for the heritage center. She had only been working at the bank’s museum for several months when Wells Fargo decided to close not only its Anchorage museum but 10 of its other museums around the country, leaving only its San Francisco location, which focuses on the company’s gold-rush origin story.

Demma, who had joined the institution with a plan to reinvigorate Wells Fargo’s programming, now found herself the manager of its dissolution.

“It was a logistical nightmare,” Demma said.

In her new role, Demma said, she is eager to showcase masterworks of Native craftsmanship, such as a 1900s argillite chest by the Haida artist Charles Edenshaw (a distant relative of Emily Edenshaw through her husband’s family), which features a carved sculpture of a bear and sea lion locked in battle. There is also a chief’s coat from the Athabascan people with floral beaded designs, rawhide fringe and red felt ties from the 1950s.

Unexpected, however, were hundreds of other donations that Demma said came in during the last year as private collectors and public institutions reckon with the ethics of holding onto artifacts that were likely stolen or unfairly traded from Native groups.

“We have always been a place where people will drop things off at the front door, but there is definitely an uptick,” Demma said. “We’ve been having a hard time keeping up.”

The influx of artifacts has fed an ambition to upgrade the heritage center’s building and the board is starting a $10 million capital campaign. It’s the kind of long-term planning that seemed unfeasible only a few years ago when the organization was on the brink of closure.

But the Ford Foundation named the center as one of America’s cultural treasures, alongside institutions like the Apollo Theater and the Japanese American National Museum, in a program designed to help organizations recover from the pandemic. With the title came a four-year, $3 million unrestricted grant and another $100,000 for strategic planning and technical assistance.

Museum officials said the grant was a godsend to a small nonprofit organization that does not regularly receive state funding, and relies on a mixture of federal grants and private donations to keep its doors open.

Arts funding has been something of a battleground in Alaska where, in 2019, the governor of Alaska, Mike Dunleavy, used his veto power to defund the Alaska State Council on the Arts. The State Legislature eventually voted to override the decision, restoring the agency.

Today, the state provides the council with about $700,000 — about 20 percent of the council’s overall budget of $3.88 million. The rest comes from federal grants and charitable groups like the Rasmuson Foundation, one of the largest arts funders in Alaska.

“We had a near-death experience when we were almost vetoed out of existence, but those dark days are behind us now,” said Benjamin Brown, chairman of the arts council since 2007. He noted that several Alaskan heritage centers receive funding from Native corporations, such as the Sealaska Heritage Institute in Juneau and the CIRI Foundation in Anchorage.

Brown described the Alaska Native Heritage Center as a “key part of the artistic and cultural infrastructure” of the state. Museum experts also said that the nonprofit distinguishes itself as being one of the few tribally unaffiliated arts organizations that is run by Indigenous people. And by serving everyone, the center has become a meeting place for different tribes and people outside those Native communities.

Monica Shah, deputy director of conservation and collectors at the Anchorage Museum, which also received a portion of the Wells Fargo collection, described the heritage center as vital.

“Without their partnership, I don’t think we could fulfill our mission,” Shah said. She credited the center with helped to bring Native culture to the forefront of Alaskan identity.

Edenshaw, who also sits on the state’s tourism board, said that Alaska, which has one of the highest percentages of Native Americans in the United States, needs to do more to promote the cultural significance of its Indigenous groups.

Governor Dunleavy’s administration said that it has directed substantial funding, including a $10.5 million recent federal grant, to the Alaska Travel Industry Associations, which includes Native tourism in its promotion. The governor’s office said another tourism promotion grant of nearly $1 million was given to Kawerak Inc., a regional nonprofit corporation in the Bering Strait region that is predominately populated by Alaska Natives.

But Edenshaw said too much of the state’s marketing is focused on “brown bears, Denali and fishing.”

“Where are the Indigenous people?” Edenshaw asked. “Our stories, if they are told, aren’t even told by us.”