As Lebanon’s Crisis Deepens, Lines for Fuel Grow, and Food and Medicine Are Scarce 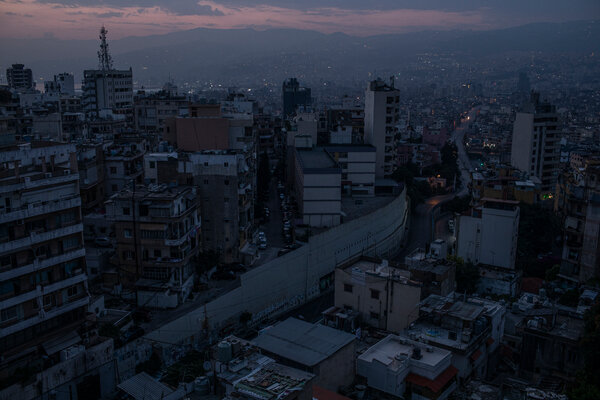 The World Bank said the financial crisis could rank among the world’s three worst since the mid-1800s. The currency has lost more than 90 percent of its value and unemployment has skyrocketed.

BEIRUT, Lebanon — As she sat in the sun in her Mini Cooper inching her way through a long line of cars to get gas, Lynn Husami, 23, tried to use her time well. She had a phone meeting with the adviser of her master’s thesis, called an old friend and played video games on her Nintendo Switch.

After four hours, she recalled, she still hadn’t reached the station, was drenched in sweat and needed a bathroom. But she feared losing her place in line if she went searching for one.

“I’m hopeless. I’m angry. I’m frustrated,” she said, summing up the feelings of many Lebanese about the financial collapse that has turned once-routine errands into nightmares that fill their days and clean out their wallets. “It is getting worse, and we can’t do anything about it. I don’t know how we can fix all of this.”

Lebanon is suffering through a financial crisis that the World Bank has said could rank among the world’s three worst since the mid-1800s in terms of its effect on living standards. Its currency has lost more than 90 percent of its value since fall 2019, and unemployment has skyrocketed as businesses have shut down. Imported goods that were once commonplace have become scarce.

The double blow of the pandemic and the huge explosion in the Beirut port nearly a year ago that killed about 200 people and heavily damaged the capital has made what was already a bad situation much worse.

The crisis threatens to add a new element of volatility to a country at the center of the Middle East that was once a cultural and financial hub and now hosts at least one million refugees from neighboring Syria. Lebanon also forms an active front in the regional struggle for influence between Iran and Israel and the West.

Inside Lebanon, the crisis has created a distinct sense that the country is coming undone, as all but the wealthiest spend their days sweating through frequent blackouts, waiting in fuel lines that wrap around city blocks, and running from pharmacy to pharmacy to search for medicines that have disappeared from shelves.

The gross domestic product of the small Mediterranean country of about six million people plummeted by about 40 percent, to $33 billion last year, from $55 billion in 2018, the last full year before the crisis began, the World Bank said. Per capita income also fell by about the same percentage during that period, leaving more than half of the population poor.

Such severe economic contractions are usually “associated with conflicts or wars,” the World Bank said on May 31. But Lebanon’s crisis was caused by extensive deficit spending by the government that left it deeply in debt, and by unsustainable monetary policies that finally collapsed, leaving the banks largely insolvent and the value of the currency plunging.

So far, the country’s fractious political system has failed to offer more than whack-a-mole solutions to whatever the most immediate crisis appears to be: raising the prices of subsidized bread, reducing electricity production and subsidizing imports of fuel, medicine and grain to the tune of about $500 million per month from the central bank’s dwindling reserves.

Last week, the Parliament passed a law to spend $556 million on a ration card program for poor families, although it remains unclear how it will work and how the state will pay for it.

The current cabinet resigned nearly a year ago after the Beirut port explosion. But it continues to serve in a caretaker capacity, which its members say doesn’t give them the authority to make sweeping policy decisions as the country’s political parties bicker over the makeup of a new government.

In announcing the resignation of his cabinet last August, the caretaker prime minister, Hassan Diab, blamed Lebanon’s many problems on a “system of corruption” that is not only “deeply rooted in all the functions of the state,” but in fact “bigger than the state” and so powerful that the state “cannot confront it or get rid of it.”

As the crisis has accelerated, Lebanese have been forced to adapt in painful ways: climbing stairs because elevators lack power, cutting out meat or skipping meals because food prices jumped, and wasting large parts of their days just to keep their cars moving.

On one recent day, Saad al-Din Dimasi, 45, had left his car in neutral and was pushing it through a long line outside a Beirut gas station to preserve as much of his scarce fuel as possible. He had taken a break from his job at a local shoe company to get gas and been stuck in line so long he was now late getting back to work.

His gray hair and jeans were matted with sweat, and he had stripped down to a white tank top to try to keep cool. But his worries did not end at the pump.

His house has only a few hours a day of electricity from the grid and he could afford only a few more hours from a private generator, not enough to make it through the muggy summer nights.

“As soon as the air conditioning goes off, the mosquitoes come and then the heat,” he said.

That left him tired at work, where his monthly salary of 1.2 million Lebanese pounds, which had been worth $800 before the crisis, was now worth less than $80.

While talking about the financial pressures on his wife and his two teenage children, he choked up.

“If my son asks for something and I can’t give it to him, I just can’t handle it,” he said.

Everyone in line had similar woes: a high school teacher who had worked for 41 years to earn a pension that was almost worthless; a 70-year-old taxi driver who was terrified his car would need repairs he couldn’t afford; an electrical engineer educated in the Soviet Union who recalled waiting in fuel lines there and was furious that she now had to do so in her own country.

Those with foreign passports or marketable skills are rushing to leave the country as fast as they can.

Before the crisis, Ahmed al-Aweineh, 31, had been on the path to a comfortable life in Beirut, with a job as a pharmacist at a private hospital and a teaching position at a university.

One recent morning, he arrived near dawn to get gas and waited in line for four hours, making him late for work.

His pharmacy often lacked blood pressure medications and even painkillers and antibiotics, he said, something that had never happened before.

So he had accepted a new job in the United Arab Emirates, where his salary would be 10 times as high and he would not have to wait to fill his tank, he said.

“I have a good job and a position at the university, but as for life, you just can’t live here,” he said.

The currency crash has made it more expensive for traders to import medications and subsidy payments from the central bank aimed at keeping medication coming in have been delayed, causing the shortages.

Outside one Beirut pharmacy on a recent afternoon, a mother came by searching in vain for acne medication for one son and prescription eye drops for another; a bank manager had failed to find any of the five medications his doctor had recommended that his sister take for Covid-19; and a couple said they had been to nine pharmacies without finding epilepsy medication for the wife and drugs for Parkinson’s disease that the man’s mother had been taking for decades.

At another pharmacy, Elie Khoury, 48, said he had managed to find only two of the five drugs his doctor had recommended to treat the cluster headaches that attacked him nightly and kept him awake.

So far, he had asked only at pharmacies within walking distance of the clothing store he managed because his car was low on gas. But he worried that he wouldn’t find the painkillers before the pharmacies closed for the day.

A public hearing into a sweeping development plan that could reshape Vancouver’s skyline got underway Wednesday, with more than 200 people signed up to...
Read more