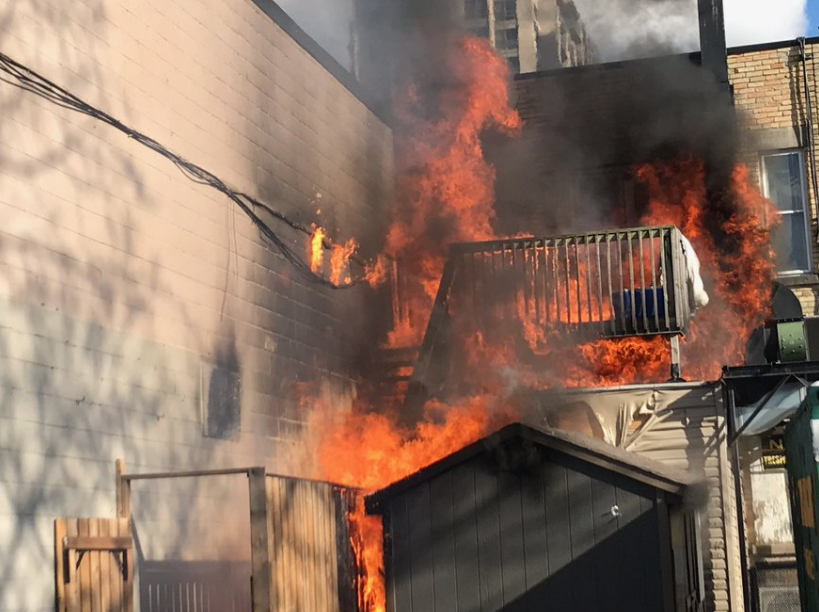 The City of London has given Ark Aid Street Mission until Oct. 4 to cease services or seek a zoning amendment for its community drop-in space at the First Baptist Church, where the agency serves hundreds in the homeless community daily.

Ark Aid moved its services to the First Baptist Church in May following a fire that broke out at its Dundas Street location.

The fire was deemed suspicious and the estimated damage cost was pegged at $50,000 as officials said that renovations wouldn’t be completed until March 2023.

The organization said it received notice Wednesday that it was violating municipal zoning rules.

“This is really difficult news that a zoning bylaw could actually shut down the only drop-in space that currently is open for 20 or more people in our community,” said Sara Campbell, executive director for Ark Aid Street Mission. “We are seeing between 300 and 400 people come through these doors and we are offering washrooms and showers and clothing and food and care and community.

The City has given @ArkAidMission until Oct. 4 to cease services or seek a zoning amendment for their work at First Baptist Church, where the agency serves 100s in the homeless community each day. Executive director Sarah Campbell shares what she was told by the city #LdnOnt pic.twitter.com/sc9SzEKEOL

“The church is to be a place where we can open the doors, welcome people, provide support, that’s what the church has done historically,” she added. “Many of our social services, hospitals and other critical elements of how we serve in our community started from the church. So, if the church can’t be a place of welcome for this community, where can we be welcoming people who are not welcome in other places?”

Ed Wilson, chair of the board of Ark Aid, seconded Campbell’s statement.

“If not here, then where? I think that is the greatest challenge that we face at this point in time,” he said.

“This location is consistent with our understanding of Christian mission and service, and we’ve been thankful for the welcome we’ve been offered by First Baptist,” he continued. “But the question then becomes if not here, then where I will let my colleagues and ministry and leadership speak?”

The city said in a statement that the zoning notice was prompted by “a number of complaints about the services being delivered through Ark Aid and the First Baptist Church.”

“Municipal by-law has an obligation to enforce the by-laws of the community,” the statement said. “Under the zoning by-law, the use, as it’s currently established is not permitted, because Ark Aid is leasing the space and providing the services as a separate entity, they are not operating as a place of worship, which is a permitted use, but rather as an assembly hall, which is not.”

Campbell said their organization is a separate entity from First Baptist but the city “believes that there’s an infraction.”

“Churches and organizations partner all the time to provide service,” she said. “We work with the homelessness prevention and housing stability team on a regular basis. We have co-ordinated informed responses, which is a bylaw division, in our space all the time, you know, there’s many elements of compliance with the work that we do.”

Closed due to heat, Ark Aid looks to reopen next week with installation of temporary AC

For Rev. Al Roberts, the news is heartbreaking as he said First Baptist is happy to work alongside Ark Aid.

“Jesus said, ‘When I was thirsty, you gave me something to drink, I was hungry and you fed me, I was naked and you clothed me,’ and that’s what we’re responding to, so my heart aches that we’re being told we can’t be ourselves.”

As of July, around 1,850 people were on the city’s by-name list, a real-time list of those experiencing homelessness in the community, down from about 1,900 in June.

Additionally, around 325 people in the city are considered chronically homeless, meaning they have spent more than 180 cumulative days in a shelter or a place that’s not housing in the last 12 months.

Kevin George of St. Aidan’s Anglican Church said the timing of the zoning notice couldn’t be worse as preparations are already underway among multiple faith communities in preparations for the winter months ahead.

“The city can’t ask the community to come forward with solutions and not offer space, options or clarity on the implications of such an order,” George said. “Faith communities are eager to help but seeing a bylaw questioning the ministry aspects of these services is unreasonable as it is our act of worship to serve.”

In response to the zoning notice, Campbell and Roberts submitted a letter to the city’s bylaw department outlining that “the ministries that are being delivered in partnership with Ark Aid Street Mission are our expression of worship and have been, on a smaller scale, always part of the ministry works of our church.”

They added that “many other places of worship across our community provide similar ministry services to the poor and marginalized.”

Detailed in the letter, Campbell said, are questions asking what the appeal process looks like, what type of legal action may be taken if they are unable to comply by the given timeline, why the use of the building was considered outside its “place of worship use,” and will the city by making similar orders on other places that provide similar ministry services.

The city highlighted options available for the organization “to bring the property into compliance,” which include the following:

While Campbell said she felt offended by this move, she said she “recognizes that the city has multiple stakeholders.”

The city acknowledged that it received the joint letter from Campbell and Roberts Friday morning, saying it would be “happy to discuss these options with First Baptist Church and we have reached out to them.”