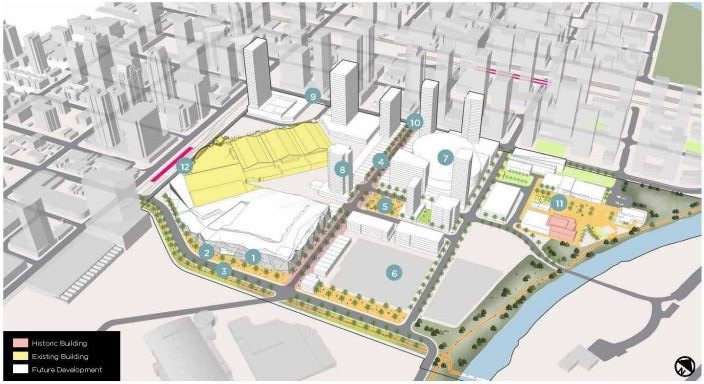 With the deal between the City of Calgary and Flames ownership for the city’s new event centre falling through over increased costs, questions are being raised over the future of the city’s Rivers District and ongoing improvements to Stampede Park.

It was announced Tuesday that the agreement between the city and Calgary Sports and Entertainment Corporation (CSEC) had collapsed due to increased costs on top of the building’s expanded price-tag of $634 million — higher than the $608 million projected in July.

In back-to-back press conferences Wednesday, both Mayor Jyoti Gondek and CSEC’s president and CEO John Bean disagreed about which organization should be responsible for costs associated with infrastructure around the building and climate mitigation work on its roof.

Both were included in a list of more than 70 conditions attached to the approval of the development permit for the project by the city’s planning commission.

Under the restructured agreement for the Flames’ new home, CSEC had agreed to take on all “reasonable” additional cost overruns in exchange for contributing more money than the City of Calgary to fund the building, after it was revealed the city could not cover its half of the price tag due to the project going over budget.

The events centre, along with the expansion at the BMO Centre and the Stampede Trail project, were set to be centrepieces of the Rivers District Master Plan; a 50-year plan to revitalize the east end of the city’s downtown between MacLeod Trail, the CP Rail Line, the Stampede Grounds and the Elbow River.

The plan, currently an undertaking by the Calgary Municipal Land Corporation (CMLC), features a mix of residential and commercial buildings centred around a new entertainment district.

According to David Low, executive director of the Victoria Park Business Improvement Area, the loss of the event centre is a missed opportunity toward the long-term vision of the area.

“I think we lose a big piece of the big prize: which is to become in the top tier in North America in terms of culture and entertainment districts,” Low told Global News. “This could have been the anchor for that.”

The event centre was also seen as an anchor for Calgary’s construction industry.

The Calgary Construction Association (CCA) said it expected the event centre project to generate 4,500 jobs during the build.

“You’re talking thousands of jobs” CCA president Bill Black said. “There are companies that have been sitting for five years or more with a really tough construction economy, and they need these anchor projects.”

Meanwhile, work continues on the BMO Expansion as well as Stampede Trail, which would connect 17 Avenue S.E to Olympic Way S.E. and is designated to become a place for local and independent retailers, while also acting as a festival street that can be closed to vehicle traffic.

The project is being completed in conjunction with the $500-million BMO Expansion project with a completion date of 2024.

The CMLC said it shares the disappointment in the arena deal falling through, and it will look into how the loss of the event centre will impact the overall Rivers District Plan.

“As next steps are addressed between the partners, CMLC will evaluate the impact to the district plan,” CMLC president and CEO Kate Thompson said in a statement to Global News. “Our commitment to the overall long-term vision remains steadfast.”

A commitment to the rest of the Rivers District Plan is welcomed by Black, who described the surrounding structures and renovations as a halo effect for the industry.

“That will not only contribute to opportunities for jobs and for employment and businesses,” Black said. “But will also contribute to the way Calgary needs to compete for talent and for companies and for private investment.”

Ultimately, Low said he continues to hope both sides of the area deal can find common ground on the event centre.

While he believes the Rivers District plan will continue to move forward, Low said the loss of the event centre is a setback.

Calgary Stampede’s CEO Joel Cowley told Global News in a statement that the news is disappointing, but he remains enthusiastic about the future of the Rivers District Master Plan developments.