An Emergency Dispatcher, Saving Lives, One Call at a Time 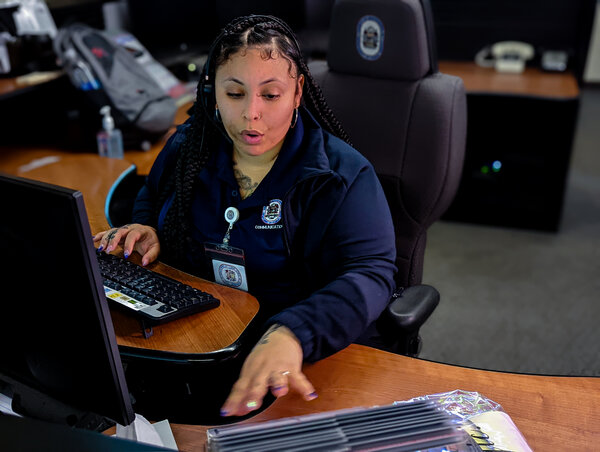 As part of a weekly series, we’re profiling women who stepped up at a moment of crisis and filled gaps in the labor market during the pandemic.

Elyce Rivera became a 911 operator at a time when emergency response phone services had become lifelines for the millions of Americans sequestered at home — and as centers across the country struggled to hire and retain new employees.

Alongside a job working for the city of Philadelphia, Ms. Rivera, 30, was doing hair at home to make ends meet in the year before the pandemic hit. She was motivated to change professions by her family’s tangible financial needs. Her partner, Bennie Tucker, 30, had lost his job, and she wanted to provide a better life for their daughters, Nyelah, 9, and Ryelee, 3.

But she also had a desire to “be a part of something big,” she said. While many other women were locked out of the labor market, she joined a group of essential workers who continue to work through the trauma of the pandemic — who, by financial necessity, choice, instinct or love, wake up every day and save lives.

Ms. Rivera had gotten an associate degree in criminal justice and criminology a couple of years prior and, inspired by her stepmother, decided to apply to be a 911 operator in March 2021.

When Ms. Rivera told her stepmother, Isabel Lopez, who has worked as a 911 operator in Pennsylvania and Florida for 20 years, that she wanted to apply last spring, “I told her the truth,” Ms. Lopez said. “It’s very stressful.” But Ms. Lopez also told her about how the good days — such as when a person she helped called her back to thank her — made up for the bad days.

It was not an easy road for Ms. Rivera. She took the entry exam four times before she passed, and was the last person in her class to get certified and cleared to take calls without a training officer on the line. She struggled with memorizing the police zones and municipalities within the county and, later, with applying that knowledge while a trainer coached her through calls. It made her wonder whether she was built for the role.

That all changed in late October 2021, when she received a distressing call at the end of her shift from a woman who had gone into labor while stuck in traffic on the highway. Ms. Rivera talked her through taking deep breaths and preparing to give birth, instructing her to put her legs up on the dashboard. At the same time, she coordinated with the police to locate the woman using the center’s GPS and mapping systems. Ms. Rivera stayed on the phone until emergency responders were able to find the woman, shortly after she gave birth. Later, the two women met and Ms. Rivera got some media attention for her handling of the call.

“It boosted my confidence level so much,” she said, “because that was a really tough call to take.”

On an afternoon in early February, Ms. Rivera sat on her couch in Eagleville, Penn., combing through her daughter Nyelah’s blow-dried hair.

“I didn’t get to take them to school today,” Ms. Rivera said. It was her seventh straight day working a 12-hour overnight shift and that morning, after dropping her partner off at work, she’d slept through the alarm meant to prompt her to wake the girls; they missed school.

Later that day, at the 911 communications center, Ms. Rivera sat down at her assigned station for the night, a wide cubicle flanked by multiple screens that showed complex maps and communication systems. Co-workers discussed their “regulars,” people with mental health issues who call frequently enough that the operators know them by name. The center is in many ways like any other office: They celebrate employees’ birthdays once a month, sending around a card and sharing desserts. The vibe in the room is surprisingly calm, considering the traumas unfolding on the other end of the lines.

The calls come every few minutes, with few breaks. People call for mental health crises, car accidents, missing person reports, burglaries and domestic violence disturbances, which Ms. Rivera’s stepmother, Ms. Lopez, said she had heard more of since the start of the pandemic.

As the pandemic exacerbated many social issues, 911 operators — 74 percent of whom were women in 2021, according to the Bureau of Labor Statistics — became a repository for the nation’s traumas. Instances of domestic violence increased. And Ms. Rivera said that many callers, such as the elderly who live alone, called “just for you to listen.”

“Sometimes they just want somebody to understand them, to sympathize with them,” she said.

The calls related to Covid were particularly sad. Sometimes Ms. Lopez could hear in callers’ voices “that they were struggling to take a breath, to say they need help,” she said. On some occasions the calls came from kids saying a parent was sick.

That’s why Ms. Lopez said it was “a shame” that 911 operators were not widely recognized as first responders, despite their contributions to public safety and the specialized skills required for the job.

Though some states, including New York and California, have moved to designate 911 operators as first responders, Sara Weston, the founder of 911der Women, a nonprofit organization, said the lag in other states prevented 911 operators from getting ongoing training, resources and mental health benefits afforded to emergency medical technicians, firefighters or police officers.

“Even though we’re not out on the street, we’re the ones getting that first call,” Ms. Lopez said, adding, “We are dealing with people who are traumatized.”

Little research is available on how 911 operators are affected by this exposure, but a seminal 2012 study in the Journal of Traumatic Stress found that it can place 911 operators at an increased risk of post-traumatic stress disorder. The pandemic seems to have only exacerbated this trend. In 2021, 32 percent of responders in a survey of 546 call-takers and dispatchers in Poland reported emotional exhaustion during the pandemic, while 53 percent said it affected their ability to do their jobs.

Ms. Rivera tries to leave her work at the door, but sometimes the calls stay with her. At one point, Ms. Rivera, recounting a call about a rape, cast down her head, sharing that she’s the product of rape and that these calls are a trigger for her. Still, she said, she feels as if she’s landed where she belongs.

It helps that Ms. Rivera works hard to cultivate optimism. When she was struggling during her training, she reminded herself she’s “not one to quit.” On her kitchen wall hang inspirational reminders: Scatter kindness. Find joy. Stay humble. Outside of work, she tries to get in as much time as she can with Mr. Tucker and their children.

Ms. Lopez and Mr. Tucker said Ms. Rivera had a “big heart” and was inclined toward helping others. Her temperament is tested sometimes by callers who berate or are rude to her, but she said she tried to remember that most people are calling “on the worst day of their lives.”

Knowing that she’s helping people during life-or-death moments gives Ms. Rivera a sense of purpose. “I feel like this is where I want to be,” she said. “This is something important. This is something that matters.”

This series is part of a technology partnership with Google Pixel exploring the journalistic applications of smartphone photography.

The Times maintains full editorial independence. Technology partners have no control over the reporting or editing process and do not review stories before publication.

Police say a man was left with a stab wound after a fight outside of a pub in Clarington, Ont., over the weekend. Durham Regional...
Read more

Mauna Loa volcano is putting on a fiery, striking show