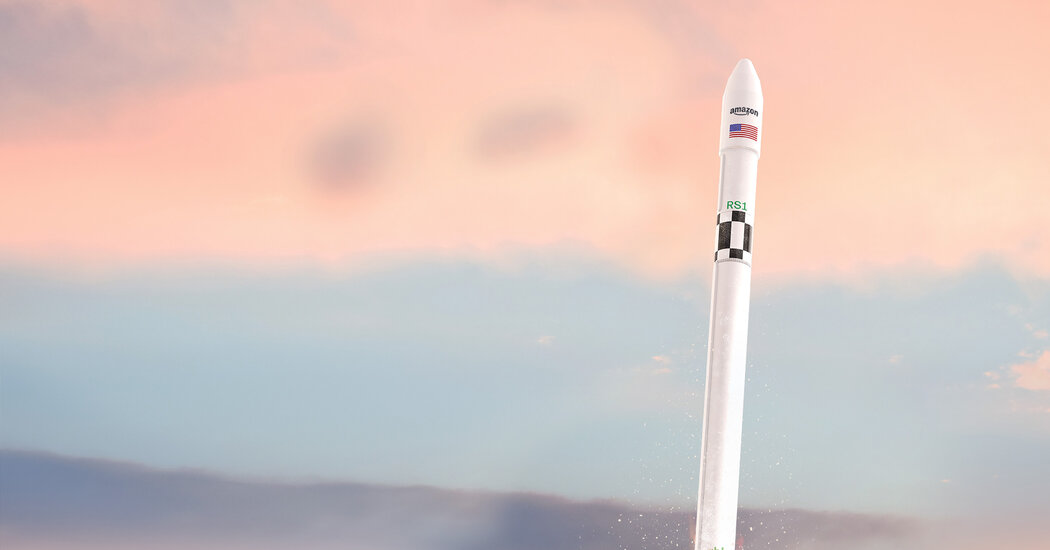 Competing with SpaceX, OneWeb and others, the e-commerce titan will rely on small rockets to get prototypes of its satellite constellation into space.

Amazon is getting ready to go to space.

The first two prototype satellites from Project Kuiper, the internet-from-space venture from the e-commerce giant, are scheduled to launch in the fourth quarter of 2022, Amazon announced on Monday. That will formally kick off its competition with SpaceX, the space company owned by Elon Musk, and OneWeb, among other rivals, for beaming high-speed internet connections to customers from low Earth orbit. It will also be a crucial test of the satellites’ design before the company launches thousands more devices into orbit.

Amazon first announced its goal of deploying a constellation of 3,236 satellites in low Earth orbit in 2019. This was the second pursuit in space by Jeff Bezos, Amazon’s founder and former chief executive who also owns Blue Origin, the rocket company. A handful of other firms are also racing to offer high-speed internet to governments, other companies and consumers whose access is hampered by the digital divide in remote locations.

Like SpaceX, Amazon plans to spend $10 billion on the project, which sits within its devices unit. But the company has been slower to start than SpaceX, whose Falcon 9 rockets have lofted nearly 2,000 internet-beaming satellites into orbit for its own venture, Starlink. Thousands of customers are testing the SpaceX service for $99 a month with $499 antenna kits.

Amazon unveiled a customer antenna concept in 2020 and has been testing prototype satellites on the ground for years.

“You can test all the stuff you want in your labs, which we do — we have spent, unfortunately, a lot of money to build infrastructure to test these things,” Rajeev Badyal, a vice president at Amazon overseeing the Kuiper project, said in an interview. “But the ultimate test is in space.”

Competition among the companies is fierce, and their plans have drawn interest from investors and analysts who foresee tens of billions of dollars in revenue once the constellations become fully operational. But those same plans have also drawn criticism from space safety advocates who fear collisions of satellites adding to pollution in orbit; astronomers, whose ground-based telescope observations of the night sky could be disrupted by the satellites; and dark skies advocates who fear light pollution from sunlight reflecting from the constellations.

The Federal Communications Commission, which regulates satellite communications to the ground, approved Amazon’s network in 2020 and gave the company a deadline to launch half of its 3,236 satellites by mid-2026. Amazon bought nine launches from the rocket company United Launch Alliance in a deal likely worth hundreds of millions of dollars.

But Amazon has been talking to other launch companies, Mr. Badyal said, including its competitor, SpaceX, whose rapid Starlink deployment is partially attributable to its ability to use its own reusable rocket boosters for launches.

The first two prototype satellites, KuiperSat-1 and KuiperSat- 2, will launch separately on rockets from ABL Space Systems, one of a handful of start-ups building smaller launch vehicles to sate demand from satellite companies. The market for smaller rockets, designed to deliver payloads to space quickly and affordably, is packed with competitors, making ABL’s Amazon contract — good for up to five launches on ABL’s RS1 rocket from Cape Canaveral, Fla. — a boost for the company.

“The selection process was a long, arduous, tough one, that was many days of popping the hood and seeing what’s underneath,” Harry O’Hanley, ABL’s chief executive, said in an interview. “I’d say that they went as deep, or deeper, as we’ve ever seen a company go.”

The pair of Amazon prototype satellites will test internet connections between space and the company’s flat, square antennas for consumers on the ground for the first time in Amazon’s Kuiper program. Regions for the test include parts of South America, the Asia-Pacific region and Central Texas. Past experiments involved flying drones with satellite hardware over antennas on the ground, and connecting ground antennas to other companies’ satellites already in space, drawing internet speeds fast enough to stream high-definition video.

Like other parts of Amazon’s device business, employees working on Kuiper face pressure to keep costs down as they develop a final version of the company’s consumer antenna. The company is considering a range of pricing options, from charging customers for the antenna and all the wires that come with it, to an “extreme” case in which it gives the antenna to customers for free, Mr. Badyal said.

“We’re hyper-focused on getting the cost down so the total cost of ownership for customers is low,” he said, adding that engineers have updated the antenna design since Amazon revealed it last year. “When you build satellites, you don’t necessarily count pennies, but when you build a customer terminal, we are counting pennies and sub pennies.”

The penny-counting comes from the playbook of its devices unit, where Amazon has experience producing consumer electronics like Alexa smart speakers and Fire sticks for streaming TV.

At a conference last month, Andy Jassy, Amazon’s chief executive, cited the Kuiper project as an example of the company’s efforts to innovate even as it has grown so large. He said Amazon needed some “blind faith” that it could figure out the complex new technology. But he added: “You’ve got to make sure in the way that you’re thinking about operating it, and what the customer experience is going to be, that customers will adopt it and find it easy enough and attractive to use.”

Building the antennas has been a challenge for SpaceX, which first spent roughly $3,000 on each antenna while selling them for $499. The company has since brought that cost below $1,500, the company’s president, Gwynne Shotwell, has said, and it plans to reduce the cost further to the “few hundred dollar range within the next year or two.”

Amazon has also fought with SpaceX over arcane legal issues in meetings with F.C.C. commissioners. The feuding between the two companies, which sometimes spills out into the open, is linked to the broader rivalry between Mr. Bezos and Mr. Musk, whose space companies compete for NASA and Pentagon launch contracts.

Earlier this year, when SpaceX asked regulators to approve a new plan to lower the altitudes of its satellites, Amazon opposed the request, complaining that it would interfere with the company’s plan to safely remove malfunctioning satellites from orbit. On Twitter, Mr. Musk accused Amazon of stifling competition. Amazon accused SpaceX of flouting rules that other companies are forced to follow.

Another challenge that SpaceX and Amazon face is reducing the amount of sunlight their satellites reflect. The Starlink satellites from SpaceX have been criticized by astronomers for “photobombing” observations of the night sky, drawing long streaks of light across images during prime celestial viewing hours. SpaceX has tested a number of tricks to bring the brightness down, such as covering the satellites in anti-reflective paint and using a so-called sunshade, a wing that acts as a visor to block out sunlight.

One of the KuiperSat satellites launching next year will also have a sunshade, Mr. Badyal said. “Will it be perfect? I don’t know, we’ll learn,” he said.