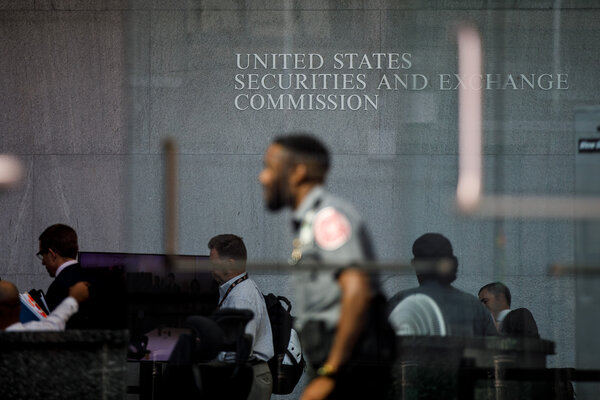 A group of law firms lined up to condemn lawsuits filed against the contentious blank-check investment vehicles.

In defense of SPACs

When 49 major national law firms banded together late last week to condemn lawsuits targeting special purpose acquisition companies, the deal-making world took notice. To get “firms who regularly litigate against each other to agree on something” is impressive, Joseph Grundfest, a Stanford Law professor and former S.E.C. commissioner, told DealBook.

SPACs have recently come under attack in high-profile shareholder suits that challenge their fundamental structure, starting with an action against the $4 billion blank-check firm run by the billionaire investor Bill Ackman, which forced him to rethink his approach.

A quick recap: While SPACs seek a merger target, they park their funds in short-term investments like Treasury bills. The lawsuits say that these financial vehicles aren’t operating companies but investment funds, so they should be subject to the stricter oversight of the Investment Act of 1940 (which would dampen the freewheeling SPAC market). Two prominent securities law professors, John Morley of Yale and the former S.E.C. commissioner Robert Jackson, now of N.Y.U. Law, were behind the suits. After Ackman, the professors sued two other SPACs, but a source close to the matter said there are no new legal actions planned, contrary to some reports.

Law firms rallied in defense of SPACs. Kirkland & Ellis, one of the top legal advisers to SPACs, helped to organize other firms to issue the statement, which said the lawsuits are “without factual or legal basis.” Some who signed on, like Simpson Thacher & Bartlett, have comparatively little involvement with SPACs. They are protesting on principle, organizers said. “The market has already driven some reform,” said Christian Nagler of Kirkland & Ellis. “Otherwise it should be done by proposing rules and laws, not by lawsuits.”

The firms also wanted to push back against the media attention generated by the reputations of Morley and Jackson. “We really needed something powerful to take away that P.R. narrative,” said Joel Rubinstein of White & Case. Of course, the law firms defending SPACs are protecting millions of dollars in legal fees, as well as principles. As for the motivations of Morley and Jackson in bringing these cases? The professors declined to comment, citing ongoing litigation.

Where does the S.E.C. stand? The S.E.C. has reviewed more than 1,000 SPAC I.P.O.s over two decades and never made a demand that the vehicles be registered under the Investment Company Act of 1940, the law firms’ letter noted. SPACs “should not be hung for crimes they did not commit,” Grundfest said.

That said, SPACs were “a sleepy backwater for 18 years and a boomtown for the last 18 months,” said William Birdthistle, an Investment Act specialist at the Chicago-Kent College of Law. Just because the S.E.C. did things one way before doesn’t mean it will continue to do so, especially under the tough-talking leadership of Gary Gensler. The S.E.C. could opt to file briefs in the lawsuits, though that would only fuel more rumors about what is driving the litigation. The S.E.C. did not respond to a request for comment.

The E.U. is set to reimpose travel restrictions on visitors from the U.S. The restrictions, which were mostly lifted in June, could range from a required quarantine to a ban on nonessential travel. (The suggestions from the European Council are not mandatory, so each country can decide whether to apply them.) The move is a response to rising case counts in the U.S., which has averaged more than 100,000 Covid-19 hospitalizations a day for the past week.

AstraZeneca is mandating vaccines for U.S. employees, DealBook has learned. This applies to all employees in the company’s offices as well as those visiting customers, with mandatory testing for those with medical or religious exemptions. The Times has compiled a list of vaccine mandates and return-to-office dates at dozens of large companies.

American troops’ departure from Afghanistan draws near. The U.S. carried out a drone strike in Kabul yesterday against what officials called an imminent threat ahead of a Tuesday deadline for remaining military personnel to leave the country. (The American-led coalition told Afghans hoping to leave the country that, for them, the airlift was already over.) The U.S. was among 98 countries that said that they would continue to take in Afghan refugees.

Jay Powell’s Jackson Hole speech gets mixed reviews. Stocks rose after the Fed chair, in a virtual speech on Friday, said that the central bank wouldn’t begin to reduce its stimulus until later this year. (Futures today suggest that stocks will hold their gains at the open.) Critics said Powell is not doing enough to prepare markets for higher inflation as the economy reopens.

Rivian plans to go public at a punchy valuation. The electric truck maker, which has backing from Amazon and Ford, is aiming for an I.P.O. valuation of roughly $70 billion. That would make Rivian, which is expected to deliver its first truck in the next month, worth more than Ford but less than Tesla.

Hurricane Ida made landfall yesterday morning in Louisiana, 16 years to the day since another powerful storm, Hurricane Katrina, devastated New Orleans. Ida arrived as a Category 4 storm, before weakening to a tropical storm this morning. Sheets of rain, high winds and storm surges knocked out power in New Orleans and left more than a million people across Louisiana without electricity. One death has been reported.

The region’s energy infrastructure is taking a hit. Nearly all of the Gulf of Mexico’s oil rigs were shut down, fuel deliveries were halted and Louisiana’s many refineries prepared for possible flooding. Platts Analytics said about 25 percent of U.S. oil refining capacity was in the storm’s path.

The economic impact is not yet clear, though some anticipate the disruption to energy supplies to cause gas prices to spike. Gasoline and oil futures jumped at first, but they are now off their highs as rigs appeared to escape significant damage. Mark Zandi, the chief economist at Moody’s Analytics, told the AP that he expects any price increases to last a few weeks.

— Elon Musk, Tesla’s C.E.O., tweeting his amazement about how much investors have bid up stock prices.

Elizabeth Holmes goes on trial: Holmes, the founder of Theranos, promoted what she claimed was a simple blood test that would revolutionize health care, attracting prominent investors and landing a partnership with Walgreens. In reality, the tests had significant problems. Holmes has pleaded not guilty to allegations that she defrauded investors and patients. If convicted, she faces up to 20 years in prison.

OPEC+ meets: The oil cartel and its allies are expected to meet after the group agreed in July to increase production each month by 400,000 barrels a day beginning in August. Economists expect the coalition to ratify that schedule.

The latest jobs numbers are released: Last month, the report showed the largest gains in jobs in nearly a year, and the lowest unemployment rate since the pandemic began. Economists and investors will be looking for signs on how the resurgence of coronavirus cases has affected businesses.

From The TimesMachine: On Sept. 4, 1882, Thomas Edison’s Pearl Street Station, the first commercial electrical power plant in the U.S., began generating electricity in Lower Manhattan. The electricity also illuminated The Times’s building. Describing the advent of electric lamps within its offices, The Times wrote: “It was a light that a man could sit down under and write for hours,” that proved “in every way satisfactory.”

Meet you in the metaverse, maybe

Facebook’s virtual reality service Horizon Workrooms, announced this month, will allow users to don a VR headset, create an avatar and sit among colleagues in computer-generated corporate settings. It’s not the only company betting on enterprise VR. You can host virtual fireside chats (using Roomkey); navigate through a gamified office space (on Gather); or put on an entire virtual expo event (on MootUp).

The research firm ARtillery Intelligence expects the sector to be worth about $4 billion in 2023. But not all experts are convinced that meetings in the “metaverse” will catch on quickly. Here are three reasons:

Content is king, even in virtual reality. Florian Couret, the head of the immersive lab at the property broker BNP Paribas Real Estate, used VR headsets to hold some meetings with colleagues across five European countries last year. But the experiment petered out. “You can have the best tools in the world to meet in virtual reality, but if the content is not interesting, nobody cares,” he said.

Employee resistance will be a major obstacle, said Darrell West, a senior fellow at the Brookings Institution. Gamers might already be living in the metaverse, but workers are creatures of habit, he said. Virtual reality may be too “far afield from our regular forms of interaction” to make it into the workplace anytime soon, West said.

Better broadband infrastructure is needed. “Connectivity is actually still a big challenge,” West said. If companies want realistic virtual office spaces, they, and tech companies, are going to have to invest a lot more money in infrastructure, he added.

Despite the hurdles, some industries are already embracing the technology. Alexandros Sigaras, an assistant professor of research at Weill Cornell Medicine, said mixed-reality headsets were piloted in I.C.U.s during the pandemic to bring additional expertise into the room without risking exposure to the virus. He regularly hosts meetings in VR and believes there’s potential for the technology in all types of workplaces.