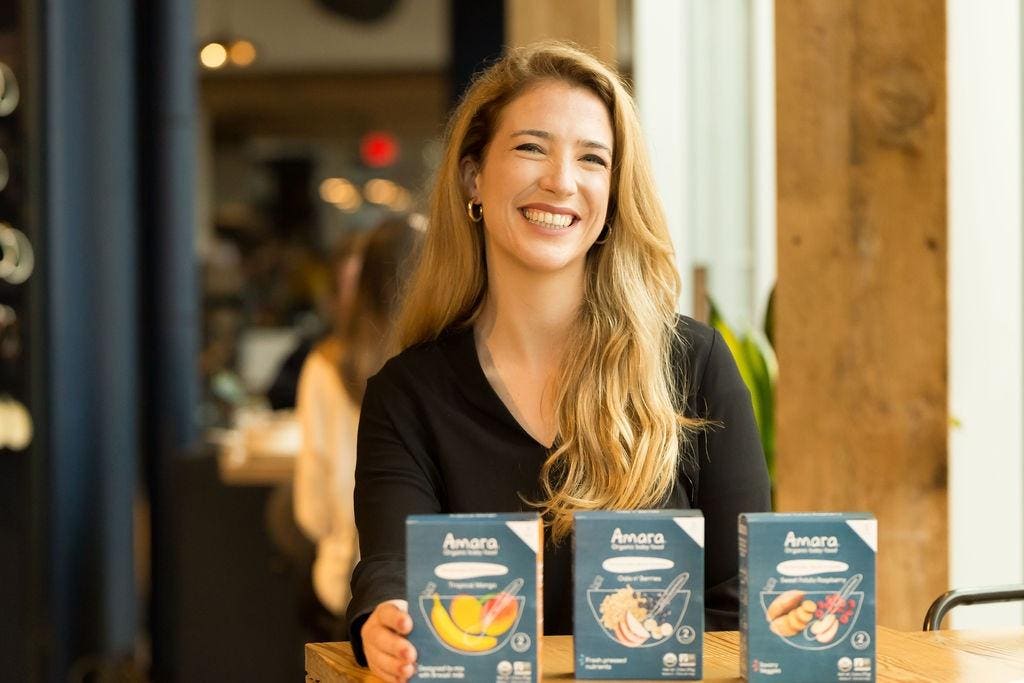 “Amara has proven an impressive ability to scale through retail distribution and e-commerce excellence, and the funding and industry expertise from Eat Well Group will help accelerate Amara’s growth as we head into calendar 2022,” Marc Aneed, president of Eat Well Group, said in a statement.

CEO Jessica Sturzenegger co-founded the profitable business, which now sells its products in more than 1,000 stores, with chef Vicki Johnson in 2016 and relied on the help of freelance consultants, such as a nutritionist and food engineers, to develop the direct-to-consumer brand. Amara developed a proprietary dehydration process to preserve both the texture and flavor of shelf-stable baby food — now branded as its Nutrient Protection Technology — once water, breast milk or formula is added. It is now used in products such as a “Sweet Potato Raspberry” vegetable mix and “Oats, Mango ‘N Strawberry Ancient Grain Cereal.” The brand, which launched its first products at Whole Foods, has also ventured into new products such as “Plant-Based Yogurt Smoothie Melts.”

Amara, which grew through word of mouth and expanded into traditional retail, raised the funding round at a time it had $200,000 in back orders and was staffing up to fuel an omni-channel growth strategy. Sturzenegger found the brand had a competitive advantage because of how the food is prepared. “We can compete more efficiently in the stores and online because we are not refrigerated,” says Sturzenegger.

Amara previously raised seed round of more than $2 million from investors such as the former chairman of Hershey’s CPG group and Pharmapacks, an ecommerce distributor. Like many other online businesses, Amara has benefited from the rapid growth of ecommerce during the pandemic. The global dried baby food market will see a compound annual growth rate of about 13.5% from 2021-2026, according to projections by Global Market Estimates.

Natural and organic brands have attracted increasing interest because of heightened concern among parents about the purity of the food they serve their babies in the wake of a report published in February by the House Oversight and Reform Subcommittee on Economic and Consumer Policy in February. It said, “[C]ommercial baby foods are tainted with significant levels of toxic heavy metals, including arsenic, lead, cadmium and mercury.” Several baby food makers faced related lawsuits alleging they violated state consumer protection laws. Since then, the subcommittee issued a second report pointing to “dangerous” levels of toxic heavy metals in some brands of baby food.

Sturzennegger has taken a grassroots approach to running the company, spending time talking to customers on the retail floor of the first 100 stores that carried the brand to understand what attracted them to particular baby food products. When she learned that many shopped based on ingredients, she adopted packaging in a single color with the ingredients listed on the label very prominently. The brand has opted to keep its price point moderate, with some meals retailing for $1.80.

Aware of the steep odds facingwomen raising venture capital, Sturzenegger worked with a storytelling coach, referred by a board member, to perfect her pitch and was pleasantly surprised by the level of interest in backing the brand.

“We had an unusually fast round,” she says. “We had a few term sheets come in. We didn’t realize how much interest we were going to get but we’re really different in the baby category. We’re the only brand that can deliver the ingredients fresh, at this scale, with ingredients that are shelf-stable at a price point affordable for everybody.”

Armed with more funding, Sturzenegger is now looking to hire a senior finance manager and head of performance marketing, and to dive into paid advertising to promote the brand. Amara is concentrating on building out its presence on Amazon while continuing to enhance its direct-to-consumer platform.  “Fundraising is a big responsibility,” she says. “We’re using $12 million of other people’s capital to grow.”

The Best Paper Shredder for Small Business in 2022

If you buy something through our links, we may earn money from our affiliate partners. Learn more.A paper shredder is a piece of office...
Read more