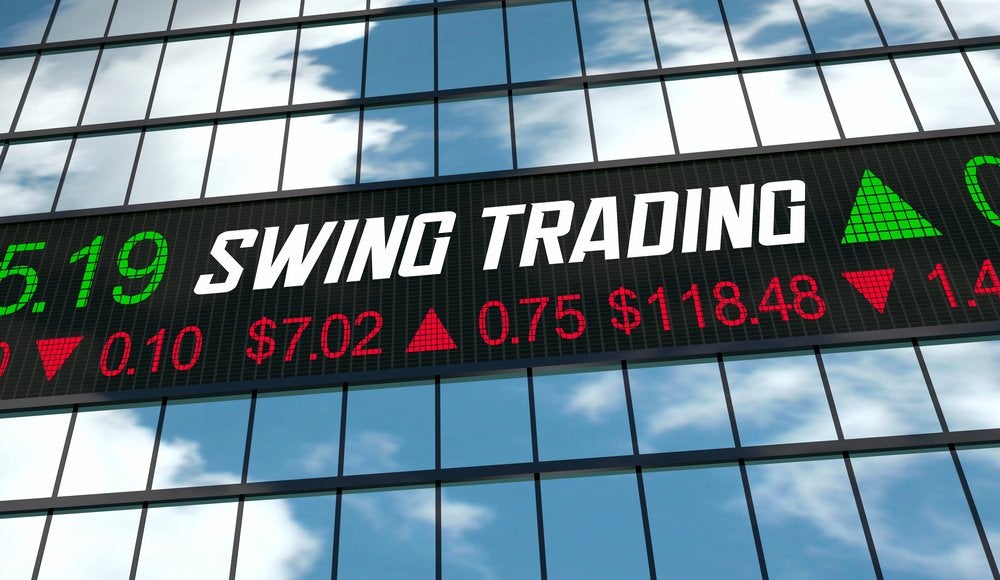 From ultra short-term day trading to long-term buy-and-hold strategies, investors today use a wide range of tactics to make money.

Somewhere in the middle lies “swing trading”. This approach seeks to profit from short-to-intermediate term stock movements. Entries and exits that span a few days to several weeks are associated with swing trading, an increasingly popular style among retail investors.

The weapon of choice for most swing traders is technical analysis, a.k.a. the art of chart reading. Classic chart patterns accompanied by a bevy of price-volume indicators typically form the basis of buy and sell decisions.

Fundamental analysis can also be weaved into a swing trading strategy. For instance, P/E ratios can be used to denote historically favorable buy and sell levels.

Swing trades can be available in both up and down markets. Lately, opportunities for near-term gains have popped up more frequently with market volatility producing some larger than normal candlesticks.

What is a Good Oil Stock to Buy?

Like most other energy names, Centennial Resource Development, Inc. (NASDAQ: CDEV) has had a great run. After skyrocketing nearly 300% last year, the oil & gas producer is up another 47% in 2022. Sounds too hot to touch, but maybe not.

It’s the ups and downs along the way that make Centennial a compelling swing trade candidate. During its incredible run, the stock has pulled back on several occasions only to climb to new highs. The mid-March dip was the latest—and considering how vulnerable energy stocks have been to the Russia-Ukraine headlines, there will likely be more.

Centennial also has some bullish classic chart patterns working in its favor. Three such patterns have popped up on the daily chart since late December. Most recently, the stock staged an upside breakout from the $8.00 resistance level. If it can push past the 20-day resistance line at $9.15, the path to the $10 to $12 range looks clear.

The Permian Basin pure-play also has a good fundamental story around it. Centennial sits on more than 73,000 acres of some of the country’s most prolific oil fields and 15 years worth of drilling inventory. Management’s increased 2022 production guidance combined with gushing crude prices bode well for next month’s first-quarter earnings report.

Will MEDNAX Stock Go Up?

Pediatric medical care provider MEDNAX, Inc. (NYSE: MD) has been in a downtrend since August 2021 but is showing signs of stabilization. After the stock basically went sideways during the month of March, trading volume has picked up in recent days. This could be the calm before the storm.

MEDNAX has rebounded nicely from the pandemic. The divestiture of non-core and higher risk businesses have improved its financial standing. Losses incurred during Covid are being replaced by healthy cash flow that is being generated at its clinics and through its telemedicine business. Some of the cash is being used to reduce its $1 billion cash burden and improve financial flexibility.

After a sharp return to profitability in 2021, analysts expect MEDNAX will build off a stronger base and deliver low-double-digits earnings growth this year. This means that the valuation on a forward P/E has swung down to 12x, an area that looks ripe for multiple expansion given the stock’s historical P/E range.

The technicals also point to good upside for MEDNAX. It recently regained the 50-day moving average line in above average volume after Credit Suisse stuck its neck out as the Street’s lone bull. This forgotten mid-cap stock is due for a check up as a contrarian healthcare play.

Aircraft manufacturer Embraer S. A. (NYSE: ERJ) is a good swing trade candidate on account of its frequent turbulence. Over the past 12 months, the stock has gapped up or down on a dozen occasions in connection with company headlines and macroeconomic developments.

The most recent gapper on March 29th was of the up variety. Embraer gained good altitude after a nine-day winning streak was interrupted by a one-day decline. It has since pulled back below $13 but appears to have broader momentum in its favor.

Analysts have been upwardly revising their long-term EPS estimates for Embraer in anticipation of smoother air ahead. Last month, the company announced its foray into the air freight market through an initiative that will convert its passenger jets to freight jets. Given the acceleration in global e-commerce activity, the move is expected to infuse growth into the business and offset the cyclicality of the current travel environment.

From a technical analysis perspective, this week’s crossover of the 50-day moving average is also a bullish sign. Ditto for a continuation wedge that formed last month and remains active. If that and the Street’s bullish sentiment hold true to form, Embraer could soon make its ascent to the $16 to $18 range.