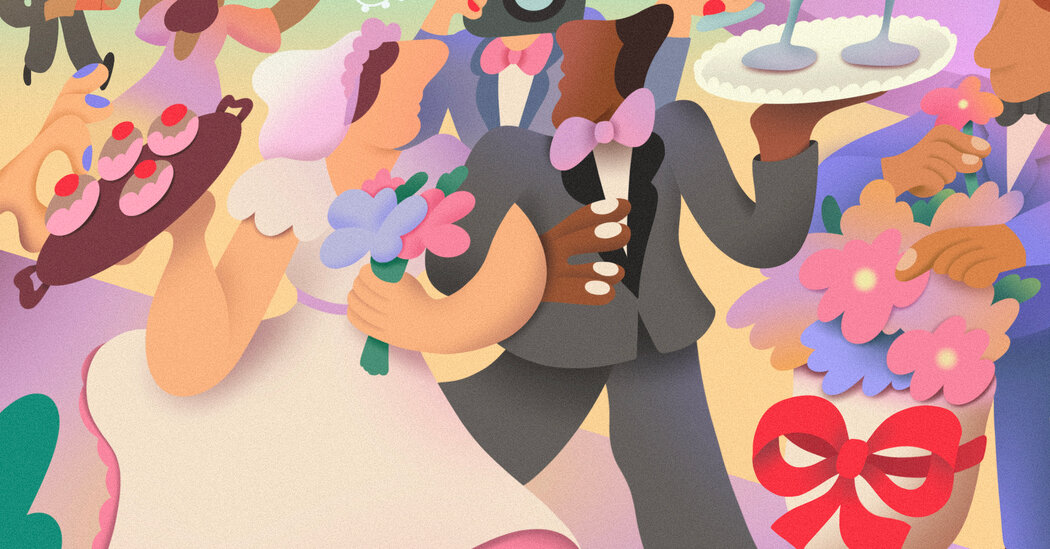 Some of this year’s betrothed are setting wedding dates to accommodate vendors, relying on the kindness of friends and even resorting to bribes.

Read more about the 2022 wedding boom in our ongoing Year of the Wedding series.

Shelby Henry, 25, thought she would have no problem compiling the perfect team for her wedding on April 9.

After all, weddings are her business: Ms. Henry is the founder, lead photographer and videographer of Amavi, a wedding studio in West Palm Beach, Fla., and Indianapolis. She got engaged last June and started contacting vendors in August, assuming that nine months would be ample time to plan her 80-person wedding in Key Largo.

“I probably reached out to 30 photographers and 20 videographers, maybe more,” Ms. Henry said. As for florists, “we reached out to probably 12 to 15, and so many of them were already booked.”

She finally hired a wedding planner, who managed to snag the vendors, paying a Boca Raton caterer an additional $1,500 travel fee to drive about an hour and a half to Ms. Henry’s wedding venue.

At least Ms. Henry had a venue. The anticipated 2022 wedding boom has created an exasperating vendor — and venue — shortage. Given that many of this year’s expected 2.5 million weddings were bumped from 2020 and 2021, many couples have had to rebook their venue several times — and now some are stranded without one. Paula Ramirez, an owner of the Historic Mankin Mansion in Richmond, Va., said that the 2022 season was fully booked by December, causing the mansion to open dates not usually offered.

This isn’t just frustrating for couples; it’s also bittersweet for a wedding industry that has barely managed to stay afloat during the pandemic.

Anastasia Stevenson, a wedding planner with Coastal Creative Weddings in Savannah, Ga., said her entire business ground to a halt with the onset of Covid-19, and she closed her doors in 2020 and 2021.

She opened again in 2022 and is on track to have the busiest season of her 16 years in the industry. Most of her 2022 dates have been booked since mid-2021, which is turning even the calmest bridal parties into bridezillas or groomzillas.

“I had a mother of the groom offer me an additional $10,000 to cancel another client and work with her on a specific date,” Ms. Stevenson said.

“We had a few clients change their dates two to three times just to have us plan,” said Ms. Goldberg, adding that her business is up significantly from previous years. She said she has been offered “two times what my fees were, and had to turn it down” because she was already booked.

One of the reasons wedding planners are in such high demand: Couples are realizing very quickly how frustrating it is to secure vendors on their own.

John Campbell, the owner of John Campbell Weddings in Tampa, Fla., said he was entirely booked for spring 2022 before the end of 2020. Typically, clients contact him nine to 14 months in advance; now, some have started calling him 24 months before their desired dates.

Even calligraphers are feeling the heat. Calligraphy takes weeks and sometimes months to complete, especially in higher volumes, said Emilie Dulles, the owner of Dulles Design, an invitation company in Charleston, S.C. While engraving and letterpress machines can operate 24 hours per day, calligraphers can’t. Custom calligraphy must now be booked months in advance, based on each per-100 order. For example, a wedding with 400 guests will take twice the time to hand letter than an event with 200 guests, Ms. Dulles said.

With few vendors remaining, couples are getting creative. Tracy Bellamy, 27, who works in marketing and sales, got engaged in June 2021 and started planning that October for her January 2022 wedding by the Boston Fish Pier.

By then, it was too late to find a caterer.

So she and her fiancé (now her husband) asked “some of our close friends to stand in as food vendors for the wedding,” Ms. Bellamy said. Her friends whipped up chicken and salad. Fortunately, Ms. Bellamy said, she found a bakery just in time so she didn’t have to ask a friend to search “How to make a wedding cake” on YouTube.

If you’re just starting to plan a wedding, you may want to think about 2023. Daniel Hess, the owner of To Tony Productions, a wedding videography company in Baltimore, said he has started booking for next year. He is getting four to five requests a day, he said, and he’s had to double the size of his regular crew of six to 12.

It’s not just the increased demand that’s causing the vendor shortage; it’s also the supply chain problems. Gineen Cargo, the owner of Gavin Christianson Bridal in Durham, N.C., said she recommends that all brides order their dresses at least six to nine months ahead of time — or a year out, to be safe — given all the “shipments being delayed or left at the ports.”

One May 2023 bride has already said “yes” to the dress, a whopping 15 months before her big day, Ms. Cargo said.

Is it too soon to be nostalgic for Zoom weddings?

The world’s largest T. rex, held in Regina, may have relatives 70 per cent bigger

For many years now, Saskatchewan has been the proud home of the world’s largest Tyrannosaurus rex. Nicknamed Scotty, this once huge animal used to roam...
Read more

It was a confrontational scene in Kitsilano Friday. Video submitted to Global News shows protesters and counter-protesters coming face-to-face at a “Story Telling with...
Read more

The number of COVID-19 cases in critical care in B.C. hospitals jumped by more than 40 per cent this week, while cases in hospital...
Read more

Shopify have published its Black Friday Cyber Monday global research survey, and one of its main revelations is that shoppers are demanding products that...
Read more

The prime suspect in the mass shooting that left six people dead at a Walmart Supercenter in Chesapeake, Virginia, left a “death note” addressed...
Read more

The Edmonton Elks have come to terms on a deal with a defensive back who was a member of the NFL’s Kansas City Chiefs...
Read more