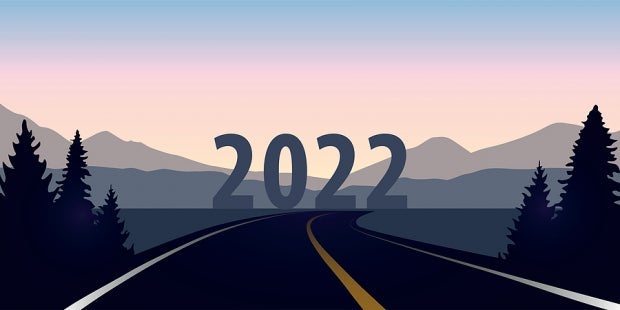 Wall Street shook off nearly 40-year high inflation data Friday to push the S&P 500 right back up to new closing records. Inflation jumped 6.8% in November, which actually came in below some estimates of 7% or higher.

Investors remain focused on the positives, despite soaring prices that might force the Fed’s hand sooner than projected, as they think back to where the economy was in late 2020. Plus, Wall Street has continued to pour cash in ever since it appeared relatively clear the new covid variant wouldn’t lead to major lockdowns in the U.S. or a massive global shutdown.

JP Morgan also came out with a very bullish note Wednesday. The Wall Street titan, specifically its chief global markets strategist Marko Kolanovic wrote in a note to clients: “Our view is that 2022 will be the year of a full global recovery, an end of the pandemic, and a return to normal economic and market conditions we had prior to the COVID-19 outbreak.”

Even though the market is back at its highs, the strength of mega cap tech stocks such as Apple clouds the fact that tons of pandemic winners and growth stocks continue to come under pressure, with many trading at or near 52-week lows. This is healthy because investors are recalibrating many names that were severely overheated amid the euphoric runs off the virus lows that continued following the initial vaccine announcement.

The bulls just helped the market post its best week since February. But many strong stocks are haven’t returned to their records. Given the backdrop, investors might want to take a chance to buy a few blue-chip stocks at discounts heading into 2022. Here are two Dow components worth considering… 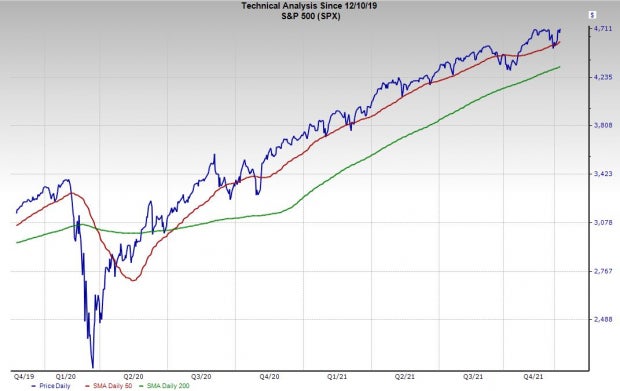 Walmart beat our Q3 earnings and revenues estimates in mid-November and raised its guidance in the face of supply chain bottlenecks and rising labor costs. Company executives also assured Wall Street and shoppers that its shelves will stay stocked during the vital holiday season. And investors haven’t seemed to care much that its Q3 FY22 comparable sales surged 9% against an extremely tough to compete-against period last year.

Walmart posted a banner year in 2020 (FY21), with sales up 7% and comps 9% higher, driven by massive e-commerce growth. Despite coming up against its best performance in over a decade, Zacks estimates call for WMT’s revenue to climb another 2.2% this year and 2.7% higher next year to reach $587 billion.

These estimates have come up significantly in the last several months and would see it roughly match its pre-pandemic growth rates. Plus, its adjusted earnings are projected to jump 16% this year and additional 5% next year. Still, Walmart shares are down 4% in the last year vs. the S&P 500’s 28% climb, amid broad-based retail sector struggles.

Walmart closed regular hours Friday around 7% off its highs and 21% below its current Zacks consensus price target of $172 a share. The stock is also trading right near its own two-year lows at 20.7X forward 12-month earnings, which also marks a solid discount vs. its industry’s average. Investors should also know that 13 of the 19 brokerage recommendations Zacks has are “Strong Buys,” with three more “Buys,” and three “Holds.”

Walmart lands a Zacks Rank #3 (Hold) at the moment, alongside its “B” grade for Value and “A” for Momentum in our Style Scores system. And its 1.56% dividend yield tops the recently-rising 10-year U.S. Treasury and the S&P 500 average. 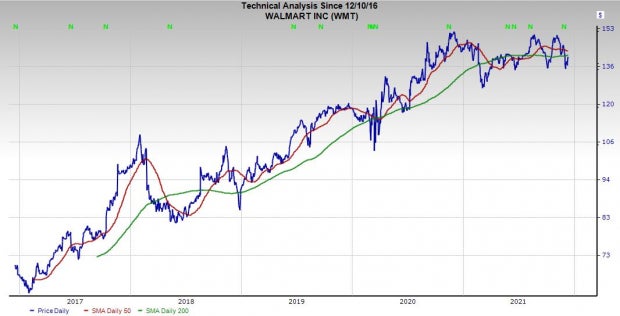 The company has spent the past several years preparing for the future. WMT in 2020 launched its subscription service dubbed Walmart+ to compete directly against Amazon Prime. The service costs $98 and offers unlimited free deliveries, discounts on fuel, access to new-age in-store checkout offerings, and more. This adds to its array of e-commerce and delivery options.

Walmart is also expanding its base through diversification, such as partnering with Shopify to bring more small businesses to its third-party marketplace. Plus, its digital advertising business is on track to become a multi-billion-dollar-a-year segment. And WMT is set to improve its financial services offerings and roll out telehealth services around the country.

Disney’s drop was pegged on the EPS miss and the slowing streaming growth. But the selling was going to come sooner than later since DIS shares got rather overheated during its huge pandemic run even as its parks and theatrical businesses came close to a standstill. The stock went from trading at 26X forward 12-month earnings in early 2020 to 72X by February 2021. Disney traded at 30.7X on Friday, with its shares down 25% from its records.

Disney’s Zacks consensus price target represents 30% upside to its current $152 levels. Plus, it’s trading closer to where it was before the pandemic in terms of EPS multiples, even though it is now a streaming powerhouse poised to be one of the more successful companies in a crowded field. This is essentially an entirely new business on top of its parks and resorts and theatrical releases that have already bounced back and are poised to rebound in a big way as people crave a return to fun. Not to mention it still operates a linear TV segment and other ancillary offerings.

Disney’s content library is full of movies and shows that people can’t get anywhere else, including Marvel, Star Wars, Pixar, National Geographic, and Disney. Its huge library, which is often a must-have for families, is a big reason why it blew away its original streaming subscriber projections so quickly, along with the lockdowns.

Company executives reiterated its 230 to 260 million Disney+ subscriber guidance by the end of FY24, which crushed its initial 60 to 90 million projection from the fall of 2019. On top of that, Disney’s streaming total hit 179 million across Disney+, ESPN+ and Hulu—NFLX closed Q3 with 214 million. The company’s streaming bundle is highly attractive as consumers are flooded with far too many different options. 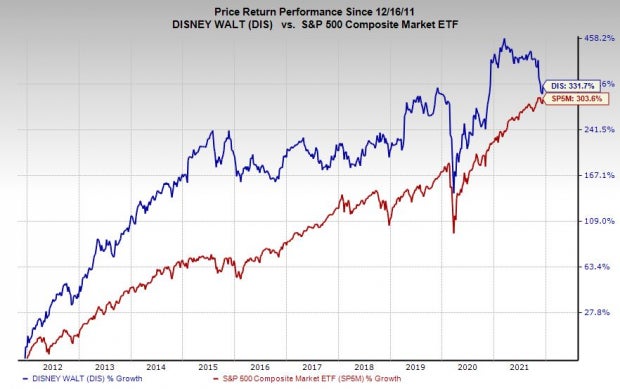 Disney’s consensus earnings estimates did dip slightly following its updated guidance, but it appears that most of the downside has already been priced in. Despite the big selloff, Wall Street remains bullish on the stock, with 11 of the 17 brokerage recommendations Zacks has at “Strong Buys,” with two more “Buys” and nothing under a “Hold.”

Disney lands a Zacks Rank #3 (Hold) at the moment, alongside an “A” grade for Growth our in our Style Scores system. And it has already regained some momentum, up 7% since the start of December. The move took it out of oversold RSI levels and it still hovers under neutral at 43. Disney could continue to face near-term selling and uncertainty, but investors with outlooks of a year or more might want to consider grabbing DIS at these levels.

Most of the stocks in this report are flying under Wall Street radar, which provides a great opportunity to get in on the ground floor.

Want the latest recommendations from Zacks Investment Research? Today, you can download 7 Best Stocks for the Next 30 Days. Click to get this free report

Police have charged a fourth person in connection with the November murder of Danielle Straus at a central Hamilton apartment. The 42-year-old accused is facing...
Read more